Youth Is Wasted on the Idealists 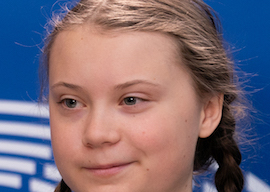 There are several public figures from whose faces I feel compelled to avert my gaze, so irritating do I find them, among which are those of Messrs. Blair of Britain and Trudeau of Canada, La Compasionaria of New Zealand Jacinda Adern, and the Scottish nationalist leader Nicola Sturgeon, whose visage has all the charm and good humor of reinforced concrete.

But by far the ghastliest of contemporary visages imperative to avoid for the sake of my peace of mind is that of the Swedish pigtailed prig Greta Thunberg. If there were a Nobel Prize for self-satisfaction she would be without competitor. She is the very Mozart of self-righteousness. Her Wikipedia entry tells us that she was once diagnosed with selective mutism; if only she would select mutism a little more often! I have many different ideas of hell, and one of them is now to be harangued by little 16-year-old St. Greta for 10 billion years without interruption. Brezhnev was Oscar Wilde by comparison.

Youth, contrary to the common misconception, is not a time of idealism, at least in the Western world, but of the utmost and uncompromising egotism. This egotism has two poles, so to speak, like magnetic north and magnetic south: libertinism and priggery. They are both self-indulgent, but in slightly different ways, the libertines and the prigs. Neither pole is very attractive, but perhaps priggery (to which I regret to say that I was inclined when young, and still have to control a natural tendency to censoriousness) is the worse. Rather Falstaff than Malvolio.

Anyway, idealism is a much overestimated quality. There are many virtues—bravery, for example—whose value depends on the things to which they are attached. Idealism is of this ilk. Islamic terrorists such as the Sri Lanka bombers were undoubtedly idealists to the nth degree; they were prepared to lay down their lives for their ideals, but it happens that their ideals were both evil and stupid. Give me a hypocrite, an opportunist, or a cynic any day in preference to such idealists.

“Give me a hypocrite, an opportunist, or a cynic any day in preference to an idealist.”

The attention and deference accorded to the pigtailed prodigy (who surely, in mitigation of her ghastliness, must have been manipulated by people older than she) is not her fault, nor is it surprising that at her age she has little idea of the complexities and intractability of the world, or of the ironies of life, let alone of its tragic dimension. But she is protected by her age from attack: I mean, of course, public counterargument or vigorous cross-questioning, not the death threats to which her parents have been subjected, a testimony to the temper of our times. Instead, she has been treated almost obsequiously, as an oracle. She is a sage by default, as it were, because anyone who questioned her in a searching, let alone an aggressive, way would be regarded as a kind of child-abuser.

The adulation and seriousness (or perhaps I should say earnestness) with which the Western world has received little Greta’s lucubrations is indicative of a crisis of authority, moral and intellectual. But she is far from alone. Two days ago, for example, I was traveling on a bus to take the train to the airport. A young man and woman, both about 19 or 20, got on. The young woman had one of those penetrating female voices that one sometimes hears in restaurants that, without being extremely loud, is able to cut through any level of noise and not only make itself heard, but make it impossible to hear (or listen to) anything else.

She told her companion—they were on their way to college or some other institution of lower learning—that she had joined in the climate-change demonstrations in London, which had caused a fair degree of chaos and inconvenienced many thousands of people. She said that she had gone to the demonstration to stand up and be counted, as if she had done something terribly brave like being a conscientious objector during the First World War. Her companion was skeptical: What about the suffering she and her fellow demonstrators inflicted on thousands of people going about their ordinary business? I warmed to the decent young man.

She said, predictably, that while she regretted any inconvenience to others, the only way to make the government listen was to create chaos. She was certain that the end justified the means because the end was as real and tangible to her as the hand before her face—she allowed not a hint of doubt to enter her mind.

The two of them passed on to other subjects. For some reason, the young man mentioned someone who had been to a pawnshop.

He tried to explain it to her. She had never even heard of such an institution.

“I don’t know everything yet,” she said with a kind of disarming naivete. She said there were lots of words she didn’t know. She thought that with age she would become more and more omniscient instead of ever more aware of the scale of her own ignorance. Then the two of them began to compare their knowledge of German (his) and Spanish (hers) that they were learning by counting up to ten in their respective languages. There was now a kind of childlike innocence to their conversation, and when they alighted the bus—they too were going to the station—they hopped about like spring lambs.

There was a strange disjunction between the young woman’s—the girl’s—awareness of her own immaturity and her belief that she was qualified to demand of the government radical changes whose uncertain consequences she had almost certainly not considered in any depth.

When I arrived in Paris (my destination), I read in the newspaper the story of a young man, age 24, a Marxist from a bourgeois home, who had arrived back in France after he had fought in Syria against the Islamic State on behalf of the Kurds. Now he had a job in the French state apparatus. He was quite clear—perhaps clearer than he meant to be—that he had gone to Syria because he had found his life in France mundane and lacking in purpose. Though he would no doubt deny it furiously, his quest had been fundamentally a religious one.

Everywhere there is pressure to lower the voting age. This, of course, would be a measure in favor of soft totalitarianism. Surely the voting age should be raised?