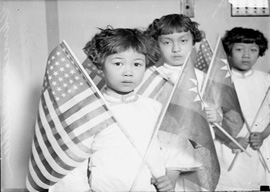 Now that UCLA has a takeout service called Ching-Chong-Ling-Long, we can finally put Alexandra Wallace’s racist rant behind us. Nothing says “our cultural wounds have healed” like a sarcastic restaurant.

For those of you who missed it, on March 13th Wallace posted a disgusting video wherein she complained about Asian behavior on UCLA’s campus. It was shortly after the tsunami in Japan and she received an unstoppable tidal wave of death threats and harassment until, a week later, she decided to leave the campus for good. The associate vice chancellor and dean of students at UCLA—where it’s OK for Chinese professors to say it’s time to “replace old white men”—claimed the death threats were “as deplorable as her original YouTube video,” but I disagree. Nothing on Earth is worse than what she did, and the endless apologies she gave before leaving campus are but feeble specks of dust in a howling hurricane of hate.

“The endless apologies she gave before leaving campus are but feeble specks of dust in a howling hurricane of hate.”

Where do these people get off thinking hate speech will go unpunished? Did Juan Williams honestly think it’s OK to admit he feels uncomfortable to see people “in Muslim garb” on an airplane? Did Rick Sanchez think it’s acceptable to imply Jews are overrepresented at “CNN…and all the other networks”? To spare your ears the bloody deflowering they’d endure if you were forced to hear the bubble-boobed blonde’s repellent hatemongering, I decided to go back and transcribe the vitriol she spewed to the entire world only three months ago:

1. “These hordes of Asian people that UCLA accepts into our school every single year—which is fine.”
Because there’s no affirmative action for whites, the continent’s top universities are becoming increasingly Asian. You need a near-perfect score to get into Canada’s McGill University, and to walk through that campus is to be magically transported to Beijing. It’s a wonderfully empowering sight, and to use the word “hordes” is reprehensible. As Chairman Mao put it, “Let a hundred flowers blossom.”

2. “It used to really bug me, but it doesn’t bother me anymore,” but their entire families come up on the weekend to cook their food and do all their laundry, etc.
How could anyone possibly be annoyed by an onslaught of someone else’s family members every weekend? If I was a student at that dorm and my Italian neighbor brought Nona and Papa and the whole gang, I would be thrilled. What’s better than a giant fucking family reunion stuck in the middle of your dormitory every time you want to party?