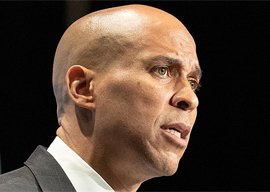 The Week’s Most Hedonic, Demonic, and Sardonic Headlines

NEW YORK TIMES ANNOUNCES SWITCH OF EDITORIAL FOCUS FROM RUSSIAN COLLUSION HOAX TO WHITE SUPREMACY HOAX
We’re not even going to check his Wikipedia page to verify ethnicity, but from what we can tell, The New York Times’ executive editor Dean Baquet—pronounced like “bouquet” but with a “buh” instead of a “boo”—appears to be about seven or eight percent black. We’re also going to assume it’s that magical voodoo seven percent of pure chocolatey blackness that landed him such a formerly prestigious position, because he is neither attractive nor talented, nor does he appear to be very intelligent. We’re not saying that because he’s black, because nerdy black guys who look like he does tend to skew more intelligent, but once this guy opens his mouth, it’s immediately apparent that he goes against this stereotype, which may be part of his brilliance.

So what you have here is a partially black man—let’s go “extremely” partially black as well as partially manly—making decisions about what stories to cover and which ones to bury. As we all know but are secretly afraid to articulate, black people have a chip on their shoulder and it’s best not to upset them.

In leaked transcripts from an “internal town hall” between and other Times staffers, this only slightly black man congratulates his presumably much less black cohorts for a job well done in stretching out the ridiculous conspiracy theory that Donald Trump colluded with Russia to steal the presidency for TWO SHAMELESS YEARS.

But since, you know, Robert Mueller failed to lead Trump and his entire family off to prison in handcuffs, Baquet says it’s time to regroup, recharge, and hell, even renege—but let’s get rid of “Russia” scare and go straight for a “white supremacy” scare.

This isn’t to say that most of pop culture for the past couple generations hasn’t been an escalating “white supremacy” scare, only that the executive editor of The New York Times, who from the looks of things possesses a wee bit of melanin, wants to pivot away from Russia and take the “white supremacy” thing straight “to the hoop,” as his brothers on the streets are fond of saying.

Did any of these alleged journalists ever consider coming at the news from no predetermined angle and with no carefully dictated narrative?

PROUD BOYS CONVICTED OF ASSAULT, FACE UP TO 15 YEARS
If you’ve been following the news since 2015 with even a hamster’s level of mental acuity, you’d realize that by and large, the left wing is violent and psychotic and routinely attempts to disrupt any public gathering by anyone who disagrees with them on even the tiniest of policy matters. For a primer in this very basic social fact, look at footage outside Trump rallies in 2016 and compare them to footage from outside Sanders and Clinton rallies from 2016.

These days, people who identify with the political right don’t make it a point—much less a lifestyle—to show up at events where people are going to express viewpoints that they disagree with and attempt to shame, silence, ostracize, and physically attack them. They may have been far more boisterous in the distant past, but they also had much more social power and public sympathy in the distant past.

We are unaware of any Antifa members going to prison for an assault against a perceived anti-leftist during the past four years—not that it hasn’t happened, but the application of justice seems fatally lopsided these days.

“Did any of these alleged journalists ever consider coming at the news from no predetermined angle and with no carefully dictated narrative?”

Last October when members of Gavin McInnes’s Proud Boys got into a street dustup with black-clad, mask-wearing “counter-protestors,” both New York Mayor Bill de Blasio and Governor Andrew Cuomo rushed to condemn the Proud Boys and all the hate and extremism and bigotry and nastiness and not-too-nice-at-all-ness that they represent.

Last Monday two Proud Boys involved in that altercation were convicted of attempted gang assault, attempted assault, and riot. They face a maximum of fifteen years in prison each.

As extremism rises in America, a Manhattan jury has declared in one voice that New Yorkers will not tolerate mob violence in our backyard…. These defendants transformed a quiet, residential street into the site of a battle-royale, kicking and beating four individuals in a brutal act of political violence.

Yeah, but why were those “four individuals” wearing masks and throwing bottles?

Even though World War II ended, like, a really really really long time ago, some people still get upset about it for God knows what reason.

You see, there was this guy named Hitler, and the logo he gave out on his business cards was this thing called the “swastika,” and an amusement park in Germany recently caught heat for featuring a spinning carousel called “Eagle Fly” that starts off on the ground appearing to be four jet planes but suddenly unspool into four spinning swastikas once airborne.

The manager of Tatzmania theme park, a man with the aggressively Teutonic name of Rüdiger Braun, coyly denies all knowledge that he was hosting a Nazi-flavored theme ride:

I want to apologize to everyone who felt disturbed or offended by our design. We hadn’t noticed the form and it wasn’t recognizable on the manufacturer’s blueprints. We are aware of Germany’s special historical responsibility and we didn’t want to offend anyone.

Although it’s a minority opinion, we liked the Germans better when they didn’t care about offending anyone.

ATTACK OF THE GAY-BASHING ORTHODOX BISHOPS
Bishop Amvrosios, an 81-year-old Greek Orthodox prelate whose real name is Athanassios Lenis, is stepping down after 41 years of service in the wake of controversy that erupted after 2015 remarks in which he called gay people “the dregs of society” and encouraged believers to “spit on” them.

In Cyprus, police are investigating a Greek Cypriot Orthodox bishop who goes by the mysterious moniker “Neophytos” on suspicion of hate speech after he suggested that homosexuality is acquired from the mother if she has anal sex while pregnant. He also said that gay men could be sniffed out of any crowd because they possess a “particular odor,” although he did not elaborate on the scents and notes of that odor, even though we wish he really had. When challenged on his comments, Neophytos surrendered not one pink inch: “I expressed the position of the church and the position of the saints.”

These bishops really need to go on a standup comedy tour. We’d pay good money to see that.

ELECTROSHOCK THERAPY FOR BIGOTS
Years ago we wrote of how pseudoscientists were developing a pill to cure bigotry, so it was inevitable that some totalitarian psychopath would dredge up the brain-scalding barbarities of electroconvulsive therapy and suggest using it to keep “racists” in line.

Maddalena Marini is a researcher at the Italian Institute of Technology who grouses that racist stereotypes are so deeply embedded in the human mind, you basically need to use the electrical equivalent of Roto-Rooter to go in there and get the pipes clean:

…the only way to change [stereotypes] is to change the biological mechanisms of the brain responsible for generating and controlling these stereotypes….[science] has shown that our mind contains stereotypes and prejudices that are linked to the different social characteristics of individuals, such as, for example, ethnicity, skin color, weight, gender, age, sexual, political, or religious orientation, disability and physical or mental illness.

According to Marini, a well-placed blast of electricity can scrub the mind clean of such “stereotypes.”

But what if they’re not “stereotypes” at all and are more properly described as “instincts”? What if they’re so universal in the human consciousness and so stubbornly resistant to eradication for perfectly natural and healthy reasons? What if all these allegedly destructive “stereotypes” were merely a form of mental shorthand to help navigate the world?

Disregard all these questions. After all, we’re dealing here with people who think racism exists and electroshock therapy is good.

CORY BOOKER SAYS HIS RAGING JUNGLE TESTOSTERONE MAKES HIM WANT TO PUNCH DONALD TRUMP
Although we had always taken New Jersey’s favorite son Cory Booker for a gay Martian, word from the oddsmakers in Vegas is that he’s partially black. Much of his campaigning has centered on the fact that, as a black man, he blackly experiences events blackishly and through certain modalities of black understanding that the nonblack can’t quite seem to ever get right.

Also, Booker has that haunted look in his eyes that seems to be worrying whether or not the entire world can tell he has AIDS.

Capitalizing on the rich American folkloric tradition of the testosterone-addled Mandingo buck casting off his rusty shackles and slaying his slave master, Booker claimed in a recent interview that “my testosterone sometimes makes me want to feel like punching” Donald Trump, even though Trump is a “physically weak specimen” and even one punch from the Booker Express would “be bad for the elderly, out of shape man that he is.”

Then, moments after thoroughly body-shaming the president, Booker said,

He’s the body shamer. He’s the guy that…tries to drag people in the gutter….This is a moral moment in America, and to me, what we need from our next leader, especially after the time of moral vandalism that we’re in right now, is…a leader that’s not going to call us to the worst of who we are but call us to the best of who we are.

Then he said something about “the worst” coming from negativity and “the best” coming from positivity—we might not be getting it exactly right, but it was something along those lines. After he lets his black testosterone enable him to physically pummel the out-of-shape elderly white man, he’s going to focus on the positive.