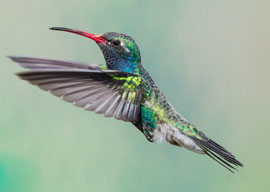 At first glance, birds look like wonderful creatures who could do no wrong. It turns out that some of them are total jerks who bully the native species out of their nests.

The multiculturalists tell me all cultures are equally beautiful and say the world’s cultures are like beautiful myriad birds where the different species fly through the air showing off their stunning colors and singing their wonderful songs. This is merely wishful thinking, because everyone knows that most cultures suck. Fact is, a lot of birds are complete assholes, too. For example…

1. HUMMINGBIRDS
If you have a hummingbird feeder on your property, you may have noticed the males all look exactly the same. That’s because it’s the same guy. The hummingbird is an egomaniac that will not only claim your feeder as his personal property, he will stake the same claim to every feeder in the area. Put up six around your house and he”ll fly a circuit around the property making sure no one else gets even a taste of sugar. He’s like an unwanted houseguest who drinks all the beer in your refrigerator.

2. CROWS
The only thing more evil than a starling is a crow. They will eat just about anything, and they particularly enjoy devouring baby birds. A robin is about the cutest bird around and its song sounds like your eardrums are being kissed on the lips, but crows eat them all the time. Crows” insatiable appetite extends to a taste for bluebirds, frogs, roadkill, and garbage. No wonder they call it a “murder” of crows.

3. HOUSE WREN
House wrens are whores. Her mate never notices, but every time her eggs hatch, there is at least one in there that’s not his. That’s because she fucks everything that moves and does it behind his back so the poor bastard never realizes he’s raising someone else’s child.

4. BALD EAGLES
Benjamin Franklin didn”t want the bald eagle to be America’s bird and he was right. Not only does it suffer from male pattern baldness, this breed of eagle is also a loser. It will only have a successful dive once every twenty tries. He usually just gives up and bullies some other nice bird out of its prey. When that fails, he chews on a corpse. Get a job, America’s bird. And try some Rogaine while you”re at it.

5. GREAT HORNED OWL
If you go near a robin’s nest she will kick your ass. An ovenbird will pretend she’s injured to lure you away from her babies. Owls, on the other hand, couldn”t care less about their offspring. Their eggs hatch in succession, one day at a time so the last one to hatch can be nine days younger than the first one. This means the youngest one can”t compete with his elder siblings and he slowly starves to death as his mother shrugs. A particularly vile owl is the great horned one. Not only does he laugh while his youngest children die, he will also go hunting just for fun and bite the head off his prey when he’s not even hungry. What a jerkasaurus.