10 Great Things About the Burqa 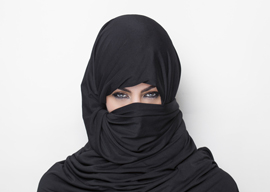 Islam is poppin” off. We”re told it’s the fastest growing religion in the world and they also say it’s the fastest growing religion in America. We all know diversity is our strength and America is a melting pot so it behooves us to give this “religion of peace” a chance. Take the burqa, for example. Only a small percentage of Muslim women are expected to be veiled but millions count too. I think it’s supposed to be about modesty and not letting sexuality run rampant, but I”m speaking as an outsider so it’s all conjecture. Here are ten great things about this wildly different cultural showpiece.

In the non-burqa world, women are seen as sex objects. Ugly women with something to say are considered too repulsive to listen to. Beautiful blondes are seen as ditzes. When a woman walks down the street in short shorts and a low-slung tank top, it’s virtually impossible for anyone to hear what she’s saying.

But when she’s covered in a black polyester bag, you have no choice but to focus on the words coming out of her mouth. When a woman wears a burqa, she is her voice and nothing more. Of course, all this assumes you”d be coming across her in the workforce or in a social situation, which I”m not sure happens.

When women are hidden, the boners cease. Now you can walk down the street and say hi to your buddies like the whole world is one giant old man bar. It’s sort of like the FBI went through the book you”re reading and Sharpied out all the sex scenes.

Nothing ramps up the sexiness of your spouse like hiding her in a sheath all day. In your home, on your watch, she can wear whatever she wants. The other upside of this pressure cooker is she’s been dying to vamp all day. Finally freed from the tethers of her invisibility cloak, she busts out the 6″ Luis Vuitton heels with Lady Gaga’s Versace safety pin dress. Her hair and makeup look like she’s accepting an Academy Award and it’s all for you. She’s yours alone and nobody can know about it. It’s like you”re Elliott and she’s E.T.

Here’s one I bet you never thought of: When you”re going on a road trip and the baby’s in the back crying his eyes out, he is vying for his mother’s attention. If she turns around to see if he’s OK, he”ll start crying even louder because it shows she’s available for more snacks or his bottle or a pacifier or whatever. However, if a woman is wearing a burqa and you”re driving at night, she could likely turn around and stealthily check on him without him seeing anything. She’s like a human baby cam. Wait … if she’s not allowed in the front seat, this whole idea goes down the drain.

Getting ready in the morning can be a bigger pain in the ass than anal sex. She can”t wear the same thing two days in a row and she has to coordinate her dress with her shoes and her top. There are work-appropriate clothes and summer outfits and they all have to match. It’s EXHAUSTING. When you can just throw a $30 blanket on your head every day, you can think about other important things like learning to fly a plane. It took us a quarter of a century to get a woman to fly a plane and part of that delay may have been due to women having to worry about outfits. Have you seen the crap Amelia Earhart was expected to wear? She looked like a tomboy rodeo clown. Of course, I”m assuming Muslim women are allowed to take flying lessons and it would be a safe bet for them to be flying jumbo jets around New York City.