10 Misconceptions I Had About Parenting Before I Became a Parent 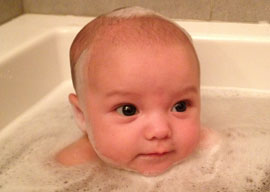 1. I”LL NEVER WEAR A BABY BACKPACK
I was so sure I would never wear one of those ridiculous baby holders that go on your chest, I bet another dad $100 that those straps would never touch my shoulders. “A baby only weighs 15 pounds,” I”d say to the beta males strapped to the BabyBjorns. “You can”t carry 15 pounds?”

No, you can”t. Not when the 15 pounds has a wobbly head with no neck muscles and you need both arms to keep him from flopping over. Not when this 15 pounds wants you to hold him all day. After trying the Bjorn, I felt like a war vet who magically got his arms back, and I happily paid that guy the $100 I owed him.

2. THEY”RE TAKING PIANO LESSONS AND IF THEY DON”T LIKE IT, TOO BAD
We tried piano lessons. They were really expensive and the kids hated them and sucked at them. The same thing happened with ballet and gymnastics. Trying to force them to do things they don”t like is as implausible as that gay Mormon dude who married a woman because he said his sexual preference is like smoking and you”re able to quit.

“It’s easy to be arrogant about parenting before you become a parent.”

3. I WILL MAKE THEM FINISH EVERY MEAL
You think you can make a kid eat something he doesn”t want to eat? Go feed a cheeseburger to a salamander. He doesn”t even want to crawl on it. It’s too dry. The first time I forced my kid to eat something, she barfed and I haven”t done it since. If making your kids throw up is good parenting, I”m a bad parent.

4. I”M GOING TO BE VERY ATTENTIVE
I was very attentive at first. Time-outs were doled out after every fight and if they didn”t say sorry to each other, they went back in the corner. But after 347 fights you start to think, “You know what? You”re on your own.” Sometimes you might even catch yourself thinking, “Go ahead and beat the shit out of each other for all I care. You might learn something.”

5. WE”RE GOING TO HOME-SCHOOL THEM
Kids in public school spend something like 30 minutes a day actually learning. At private school it’s probably three times that. I have an hour and a half of spare time a day to spend talking about history, so why not pull the kids out of school? Well, for one, they”re already in my house way more often than I can handle. By contrast, sometimes I feel like going to work where I deal with getting sued, licking clients” asses, and where firing people is some kind of party. What kind of maniac thinks 100% of their waking moments are about the right amount of time to spend with your kids? When I told a home-schooling parent that my kids go to public school, she said, “The only thing they”ll learn there is how to fight.”