10 Things That Suck About Being Rich 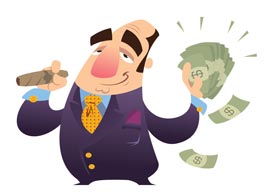 As a serial entrepreneur, I”ve created and sold many companies over the years. From a media empire to an ad agency (we had quietly sold Rooster NY a year before it was shut down for transphobia) to some weird box that monitors your retail browsing, I”ve always peppered real estate investments with high risk, high reward start-ups. It’s nice to know your family will be OK when you croak, but there are at least ten things that suck about being rich.

1. THE STEWARDESSES IN FIRST CLASS ARE BITCHES

When Alec Baldwin was kicked off an American Airlines flight for refusing to stop playing “Words With Friends,” those in coach assumed he was an asshole. Those of us in the front of the plane put half the blame on the stewardess.

As it is with flights over 20 hours, serving first class is a coveted position that only senior flight attendants are eligible for. In both cases, these women are some of the most entitled, bitchy, impatient snobs in the service industry. In fact, they refuse to even call themselves servers. They say they are “primarily here for your safety but can also help you if need be.” Nah, bitch, you ain”t nothing but a waitress in the sky.

If you have any kind of excess cash, odds are you”re going to be duped into investing in at least one restaurant or bar (with professional athletes, it’s car washes). After that, you should be able to say “I”m doing okay for frivolous investments right now, thanks,” but the pitches keep coming.

“No women ever hit on me, but if one does, I”m going to yell “Nice try!” and then shove her in the bushes and run as fast as I can in the opposite direction.”

Outside of the almost weekly suggestions for a new bar, I was recently pitched a massive piece of land in Northern California that a woman wanted to turn into a “glamping“ resort. She had no experience whatsoever in the field and was approaching her ovarian expiration date, so I suggested that she focus on creating a family instead. She got real ornery after that and bogged me down with some long story about being molested that ended with threats to my own family.

3. GUYS DON”T PAY FOR THEIR ROUNDS

If you”re even remotely interesting, you don”t hang out with other rich people. Instead, you spend your time with the same broke-ass losers you grew up with. Once your scratch becomes exponentially larger than theirs, they see no problem with you leaving your card behind the bar and putting every single round on it. While it’s true that this is a totally affordable expense, it also makes you feel like the guy’s dad.

I know a successful comedian who lives in Manhattan and sends all his kids to private school. His apartment is likely smaller than your home and you”d have to sell that home to pay for a year of their tuition. The guy who opens for him on tour lives in Queens and sends his kids to public school. Their lives are pretty much the same, and they both enjoy the same luxuries, though the rich guy is probably more stressed.

I am constantly stunned by the price of rich people things. It costs $10,000 to hook a heater up to your pool and even then, the electricity bill to use it for a weekend visit is $350. That’s the same price I had to pay when I lost the key to my Range Rover last week. That’s because it’s not actually a key. It’s a big huge stupid computer that fills up my whole pocket. The key I had for my $800 motorbike when I was a teenager was superior in every way.

5. THE TAXES ARE INSANE

I have an apartment in the city, a home in Costa Rica, and a country house upstate. The school tax for the place upstate alone is upwards of $5k a year. That means every week I give the local high school $100 even though my kids will never go there. You should see this place; it looks like the high school in Grease, even though the population of the entire town is about 500.

Even with all the loopholes and LLCs and capital gains, etc., the amount I pay in tax each year is roughly twice what your average liberal makes in a year. As Andrew Wilkow is said to have said, “I”ve never met a Democrat who wasn”t a Republican when talking to his accountant.”