10 Things the Left Gets Right 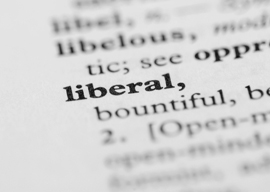 Liberals are not idiots. They”re just like you were when you first moved out of your parents” house. It’s like their research is cryogenically frozen right before Google was invented. However, unlike extremist Muslims and Hasidic Jews, some of the things they believe are actually correct.

1. AMERICAN FOOD PORTIONS ARE TOO LARGE
Have you ever ordered a burrito at Chipotle? It’s a football. Two-thirds in, and you feel like De Niro trying to fatten himself up for the final scene in Raging Bull. I moved to this country 13 years ago and have never been able to finish 100% of an appetizer and a main course. Libertarians say it’s up to us how much we eat, but it’s not good for morale to throw platefuls of food into the garbage again and again. The obesity epidemic also costs all of us a lot of money. I spoke to a surgeon who said fat-related diseases are about to take over Medicare and it would actually be cost-effective for the government to pay for gastric bypasses. I hate Bloomberg’s nanny state and I don”t want anyone to be told how much sugar they can ingest, but I don”t have a solution for the imminent Lard Apocalypse. Do you?

2. CEO SALARIES ARE TOO HIGH
The Freakonomics guys should do some research on what the worker/CEO pay gap does to the economy. It’s not as simple as saying auto workers on $60K a year should get more of the $9 million that the head of GM makes. It’s about the “fuck this” mentality such disparities give the entire working class. You”re more inclined to steal, cheat, and lie when your boss makes 150 times as much as you. I don”t know how we prevent these people from making so much money and I certainly don”t want the government getting involved, but I do know things made a lot more sense in 1980 when CEOs only made 42 times as much as their workers.

3. OBAMACARE IS A GOOD IDEA
As I wrote a couple of weeks ago, the healthcare bill is a well-written piece of legislation that makes perfect sense. We already pay for illegals in emergency rooms, so why not get it on the books? Every civilized country in the Western world has state-sponsored healthcare, so it’s not insane to assume it would work for us. It wouldn”t work for us, but it’s not insane to think it would.

4. WAR IS BAD
Liberals are right to question the more than $700 billion we spend annually on our military. Why do we have 50,000 soldiers in Germany? Let’s get out of Italy, Japan, South Korea, and the entire Middle East. It may pain many neocons to admit it, but Israel doesn”t need our dollars. If a full-scale war breaks out, we can jump in the same way we would if someone invaded Greenland. We shouldn”t pay taxes for elected officials to issue a fatwa on someone else’s teenage son.

5. WOMEN WHO GET PREGNANT FROM A RAPE SHOULD BE ALLOWED TO ABORT
Let’s give them this one. If some guy jumps out of an alley and rapes a woman at knifepoint and ejaculates in her and she’s unable to include the morning-after pill in her rape kit and she then gets pregnant from it, she should not be forced to carry that baby to term.

6. GAYS SHOULD BE ABLE TO GET MARRIED
Speaking of something that never happens, how about we let a gay lover visit his dying spouse in the hospital? Dan Savage seems to think this is an epidemic, so let’s cut this situation out of their talking points.