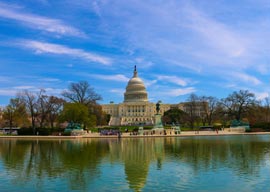 Obama is an incredibly cool guy who consistently tears the teleprompter a new one but the liberal ethos is based on theories and theories are expensive. Sure, it’s possible America is a racist hellhole and blacks are a few diversity dollars away from prosperity. I could posit that American colleges are experiencing a rape epidemic and okay, maybe it is true that alternative energy and public education would really thrive if they had another decade or two of money thrown at them. Unfortunately, we have to draw the line somewhere and I think $18 trillion is a pretty good place to start.

2016 needs to be about shrinking the government and to do that we need a Republican in the White House. My money is on Ted Cruz. What’s important is that the president says things such as, “We could say they spend like drunken sailors, but that would be unfair to drunken sailors, because the sailors are spending their own money.”

This isn”t a Kentucky Derby where we all wear funny hats and watch passively from the sidelines hoping our horse comes in. This is a demolition derby where we are in the car and we need to keep ramming the enemy until we”re the only car left.

1. COME TOGETHER
The only thing that really matters now is that the administration is as far from the left as possible. The economy has been doing well as of late but that’s only because Congress tied Barack’s hands behind his back. The one thing libertarians, neocons, paleocons, Republicans, and the tea party have in common is they don”t want big government. Let’s focus on that. Donald Trump can run and so can Scott Walker and Romney and every non-liberal from New Mexico to Pennsylvania as long as they don”t ruin the other guy’s campaign. When there’s a clear winner, everyone from #2 down pours their voters into the winner’s pot.

After the election, we can have libertarians fight with tea partiers about social security, paleocons fight with neocons about foreign policy, and Republicans fight with conservatives about culture.

2. GET BLACK VOTES
If you watch left wing shows such as MSNBC’s Chris Hayes, you”ll notice they spend half the show discussing the minutiae of politics and how many seats this party has and who’s in the house etc. I find it just as boring as you do but in order to get someone in office who doesn”t want to do anything, we have to pretend to care about the office.

This means fighting for votes, especially former write-offs such as young people, women, and blacks. ESPN’s Stephen A. Smith made this pipe dream a possibility recently when he said blacks should vote Republican because, “Black folks in America are telling one party, “We don”t give a damn about you.” They”re telling the other party “You”ve got our vote.” Therefore, you have labeled yourself “disenfranchised” because one party knows they”ve got you under their thumb. The other party knows they”ll never get you and nobody comes to address your interest.”

Make the same argument for young people and women and you”ve won the election.

3. DROP GAY MARRIAGE
There is an argument to be made suggesting gay marriage is a ruse and that the agenda behind it sabotages American traditionalism by redefining our most sacred institution. So what? Gays getting married just to spite us is like a woman having sex with you to show you how disgusting you are. I”ll take it.
Heterosexuals sullied marriage when baby boomers invented divorce in the 1980s and if someone wants to assimilate into our culture, we should do nothing but encourage them. Besides, pretending you”re for gay marriage is a great way to get young votes. They”ll all be divorced by 2017, anyway.

4. DROP THE DRUG WAR
As with gay marriage, it doesn”t really matter how you feel about the war on drugs. The war is lost. We killed Escobar and created a vacuum that lead to massive cartel wars in Mexico and ultimately created an environment where Obama and Holder could enact Fast & Furious. The more you meddle the worse it gets.

Nobody’s going to ask you to endorse hard drugs, but it pays to shrug your shoulders when asked about marijuana. It’s cool and as we saw with the coffee-colored Fonzarelli who bamboozled his way into the White House, cool = votes.

5. BE FUNNY
Pets were recently OK”d for medical marijuana use. It was endless fodder for late night TV hosts and comedians. On all the conservative shows I saw discussing the topic, every one took it so seriously, you”d think you were watching Dog TV. Lighten up. If you can”t laugh at Scooby Doo getting baked, what can you laugh at?

The left owns comedy, but things are changing. Liberals have become so completely absurd they”re virtually begging us to make fun of them. I”d argue Portlandia is the perfect example of right wing comedy. There isn”t a lefty trope they don”t attack. With Fox News giving Greg Gutfeld his own show and refusing to cancel Red Eye after he left, there is hope the right might learn not to be so serious about everything.

6. EMBRACE POP CULTURE
Oh, you haven”t had a TV in ten years and you “Don”t miss it one bit”? Congratulations, Luddite. Like a smartphone and the computer you”re constantly watching videos on, television is a tool and it’s up to you how you use it. You can see a documentary about the architecture of The Vatican or you can watch the Mob Wives get into a fistfight. There are steak dinners and there’s bubble gum. It’s all delicious. To proudly ostracize yourself from American culture is to give up on the country as a whole. So stop bitching about BeyoncÃ© and lascivious dances. You sound like a 1950s Christian having nightmares about “Elvis the Pelvis.” Before rap and violent video games we had the Parental Music Advisory and the Comics Code Authority trying to protect our kids from all the stuff they love. Youth culture is about danger and sex because that’s all they can handle at that age. Let them handle it and mind your own business.