2014: The Year the Liberal Narrative Exploded 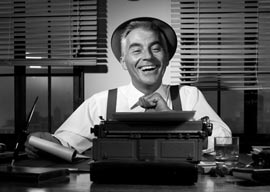 The only thing worse than a man is a white man, am I right? They start off as violent little bastards, biting Pop-Tarts into guns, and before you know it, they”re raping their way through college. The very privileged end up running corporations that pay women 77 cents for every dollar a man makes, and the less fortunate end up as cops who shoot black men in the head just because.

As our white male college professors told us, “The white man” is the “greatest trouble-maker on earth.” White male culture is Western culture and both are drenched in racism and sexism. The only hope for redemption is annihilation. Anything would be better. As social media nutbar Suey Park put it, “Whiteness will always be the enemy.” This narrative has been plowing forward like the train in Snowpiercer since the 1960s, but it appears 2014 was the year the wheels finally came off.

At first glance, the UVA rape story was perfect. Not only did it involve preppy white kids gang raping women, but these frat boys were so incredibly popular, nobody would dare speak out. Being raped sucks but not being invited to a party is way worse. The Duke Lacrosse case had all the same characteristics but uh, those guys weren”t blond enough. Besides, proving Jackie’s story meant Tawana Brawley would look like the exception, not the rule.

“One of the many advantages of multiculturalism is that feminists will finally have the rapists they need to fill their statistics.”

Unfortunately, the details turned out to be hard to swallow. So they threw her onto a glass coffee table and didn”t stop or even turn the lights on after it smashed? They were all cutting their hands and knees during the rape? What are they, savages? If you”re looking for a rapist that brutal, all you have to do is go to Sweden. Only he’s not blond. He’s a Muslim Somali immigrant. One of the many advantages of multiculturalism is that feminists will finally have the rapists they need to fill their statistics.

Lena Dunham was another girl woefully low on Republican rapists. So, she invented one. Turns out he may actually have been a Democrat. How inconvenient. The perpetually derailed Dunham is an interesting case because not only does she personify the cause, she makes a lot of money off it. She also shares the assumption of untouchability the left has. She hurls accusations at nonexistent white men while assuming nobody will put her through the same rigmarole. We first saw this last year when she was called out for not having enough black characters on her show. Apparently, it’s racist to depict your own life if your own life is white. I thought this attack was ridiculous but it’s still nice to see these smug fools get whisked away by their own shit storm.

Her book was even more self-indulgent than her show and blindly included a worldview that scripted men as sexual predators who prey on the weak, while simultaneously showing herself taking advantage of her baby sister. Most were outraged by the way she appeared to sexually molest the girl”but what about the part where she outed her sister as a lesbian to her parents? Doesn”t that go against their whole credo? Do they even know what their credo is anymore?

2014 is also the year New York Magazine put an anal rape victim on its cover. The details are sketchy but the alleged victim’s contention is that she was raped in the butt and Columbia University did nothing about it. The same way getting violated on a pile of broken glass should pop up some red flags, many sane people want to know why she didn”t go to the police. She claims it’s because she “didn”t feel safe or comfortable talking to them.” Instead, she has chosen to carry her mattress everywhere she goes and is happy to pose for photos or answer questions about it.

Being raped in the anus is usually considered about as uncomfortable as it gets”just ask all the male victims in prison (which is where the majority of rapes in America occur). You”d think one would want this guy off the streets and behind bars where he couldn”t do it to any woman ever again”but this girl simply wants him expelled. It may be the testosterone talking but campus rape in 2014 appears to be totally devoid of both penises and logic.

After spending their formative years raping, we”re told, many fellows graduate to randomly shooting innocent black men. Like Trayvon, Mike Brown was wandering down the street minding his own business when a cop shot him six times. He had his hands up and pleaded with the cop, but we are living in a comic book and villains have no mercy. This same summer, Eric Garner was strangled to death on the street for selling cigarettes.

A quick look at both cases reveals that: a.) Brown did not have his hands up, and b.) though it’s not clear what led to Garner’s death, it’s very clear he was resisting arrest. The Garner case was a lot less cut-and-dried than the Brown one. Sean Hannity was lambasted for questioning why we”re cracking down on illegal cigarette sales, but he’s right. It is a stupid way to die. However, Brown and Garner are not heroes. They were losers. Both had a long history of crime and both thought they could win a fight with a cop. However, killer cops fit the narrative so the entire world ran with it, including countries with access to Google.