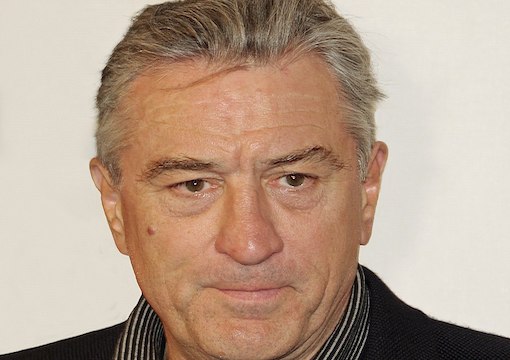 Along with everyone else in the entertainment industry, De Niro received the memo that if he ever wants to eat lunch in Hollywood again, he must flail about flapping his arms like one of those weird inflatable puppets you see on used-car lots about how Donald Trump is the most evil thing ever to happen to our galaxy and if we don’t neutralize him immediately, our planet will explode and Satan will win.

De Niro has formerly said that he would like to punch Trump in the face. All we’ll say about that is that he’ll have to aim high, seeing as Trump is four inches taller than the scrappy Sicilian half-pint.

He has also called Trump a “monster.” And a “pig.” And a “punk.” He also said Trump is “too stupid to even know he is evil.”

From all appearances, Robert De Niro is very upset with Trump—that is, unless he’s acting.

In a sit-down interview with that seeping tub of suet named Michael Moore, De Niro expressed a desire to see feces—whether human or animal, he didn’t specify—smeared across our one and only president’s face:

There has not been one thing about this person that has been redeeming, as far as I can see….I’d like to see a bag of shit right in his face. Hit him right in the face like that, and let the picture go all over the world. He needs to be humiliated. He needs to be confronted and humiliated by whoever his opponent is….They have to stand up to him, they don’t have to do it in an obvious physical way, but they have to have the formidability to confront him and to put him in his place, because the people have to see that, to see him be humiliated.

Neither Travis Bickle nor Rupert Pupkin ever sounded that crazy. Suddenly it becomes clear that Robert De Niro has never acted a day in his life—he’s simply a mental defective behaving naturally.

MAN SENTENCED TO 16 YEARS FOR SETTING RAINBOW FLAG ON FIRE
Ignorance leads to fear, which leads to hate. Hate then leads to more ignorance, which is scary. Scary ignorance then leads to more hate, which always ends in violence. If there’s anything worth hating and fearing, it’s ignorance. And for all the ignorant people out there, don’t be hatin’ on what I just said. It just shows that you’re afraid.

Adolfo Martinez’s mother probably cursed him from birth by naming him after Hitler. Actually, we’re not certain that’s why she named him “Adolfo,” but c’mon, lady, your son was born a mere 30 years ago at a time when everyone knew that Hitler’s unforgivable sins had rendered both his name and his mustache off-limits for eternity.

Not to knock his mom too much, but either she didn’t tell him not to hate homos or Li’l Adolfo didn’t listen to her. The homophobic Hispanic from Iowa just received a 16-year sentence for stealing an LGBTQ flag that was hanging outside Ames United Church of Christ and burning it outside Dangerous Curves Gentleman’s Club on June 11.

Has anyone ever seen a gentleman at a “gentleman’s club”?

Martinez received his harsh sentence not completely because homosexuals’ feelings are so sacred that we must protect them no matter how insanely sadistic the punishment is, but because he’s a habitual offender. But make no mistake—the fact that he will spend 16 revolutions around the sun while trapped in a cage is intended to send a message to anyone foolhardy enough to set flame to something that is sacred to the flamers.

PEAK TRANS: TRANSGENDER WOMAN ACCUSED OF TRANSPHOBIC HATE SPEECH
What kind of world do we live in where a man can pretend to be a woman so long as he doesn’t break character and say, “OK, I’m only pretending”?

“What kind of world do we live in where a man can pretend to be a woman so long as he doesn’t break character and say, ‘OK, I’m only pretending’?”

Debbie Hayton is a physics teacher in England’s dreary Midlands. Debbie’s parents probably named Debbie something like “Jack” or Nigel,” but we don’t want to “deadname” Debbie and get put on some hit list. At some point in recent years, Debbie legally changed Debbie’s name and received hormone treatment and sex-assignment therapy.

Whew. At least we were able to get through that entire paragraph without saying “her.”

At some event organized by a group of killjoys called Fair Play for Women, Debbie committed the self-hate crime of wearing a T-shirt that said:

Trans women are men. Get over it!

Debbie is facing expulsion from the LGBT committee of the Trades Union Congress for not only wearing the shirt, but for opining thusly in a published essay:

Trans women are biologically male — in fact, being male is the sole qualifying criterion to be a trans woman

Where’s the lie? In fact, the only lie we could spot is that this creatures calls itself “Debbie” and wants us to lie and say he’s a chick.

According to Maria Exall, who looks like she could be Tucker Carlson’s younger, underachieving brother, Debbie’s comments crossed that “line” we keep hearing about:

[Debbie has] gone beyond discourse, and the expression of alternative viewpoints, and is now propagating hate speech against the trans community.

But that’s simply not true. And neither is the fact that Debbie is really a “Debbie.”

This is all one eternally spiraling headache. Does anyone have any aspirin—like, five or six of them?

RUDY GIULIANI CHALLENGES GEORGE SOROS TO A JEW-OFF
We always considered ex-New York City Mayor Rudolph Giuliani to be a devout and likely Mob-connected Catholic, so it comes as a wee bit of a shock to hear him say that when it comes to Jewishness, he can out-Jew George Soros any day of the week.

Responding to the allegation that any criticism of George Soros is rooted in anti-Semitism, Giuliani dismissed such meshugga goy talk:

Don’t tell me I’m anti-Semitic if I oppose him….Soros is hardly a Jew. I’m more of a Jew than Soros is. I probably know more about — he doesn’t go to church, he doesn’t go to religion — synagogue. He doesn’t belong to a synagogue, he doesn’t support Israel, he’s an enemy of Israel. He’s elected eight anarchist DA’s in the United States. He’s a horrible human being.

When a reporter later asked Giuliani how any Catholic could out-Jew any Jew, much less one as prominent as Soros, he said, “I’m more Jewish than half my friends.”

Yeah, but what if half of his friends aren’t Jewish? And how is he measuring Jewishness, anyway? We’ll believe him when we see notarized test results proving that he has a serum blood level of at least 2.3 Jewtrons or higher.

“SEX OFFENDER EXPERT” CHARGED WITH SEX OFFENSES
If you were writing a short story and wanted to make one of the characters a sex offender, it’s hard to go wrong with a name like “Kurt M. Bumby.” The guy just sounds like a deviant.

Bumby, 50, is a Missouri-based “forensic psychologist and national leader in the field of sex offender management.” For two decades he’s been advising governmental agencies across the country in the fine art of “sex offender management.” Just last month he was paid a staggering $280,000 merely for delivering a report to the Arizona Supreme Court about how to better manage sex offenders and, we dunno, make them less sexually offensive.

Now he is facing charges in both St. Louis County and Columbia County, MO for child sex crimes against two separate children. The St. Louis case involves molestation charges from 1988 to 1994 while Bumby was in college. The alleged victim was the member of a family Bumby had befriended and would visit on weekends. The Boone County charges allege that Bumby sodomized yet another child of a family friend between 2008 and 2015.

You always have to keep an eye on the do-gooders. Always. More often than not, they’re the worst.

NIGERIAN MALES RISE UP AGAINST THE MISANDRIST PLAGUE!
In a climate where it often feels like the entire Western media is trying to gaslight you, we find solace and comfort in the magical world of African journalism.

‘Toxic masculinity’ is the new rage. It connotes everything supposedly wrong with Nigeria’s male folk. Coined in Western feminist circuits, an obsession with it at the homefront highlights the workings of the misandrist mind. Yea, most of Nigerian feminists are misandrists or closet man-haters….
By chanting the sins of toxic maleness, they seek to force men on a defensive swerve. With delusional certitude, they aim to usurp the patriarchy and seize control of society. But like all things novel, they will enjoy their seasons of anomie and pretension to sentience. They will seem to ‘run things,’ until their sand castles come tumbling down….
The Nigerian man must, however, live to thwart the onset of feminist dystopia. Right now, he manifests as a lost cause. Having strayed in the maze of perverse feminist plots and literature, he navigates manhood, answering to name-plates forged by his nemesis….
By remoulding him into a demon, a doormat and social affliction, feral feminists or Feminazis, if you like, have gained an edge over him. The exploitative nature of rapists, murderers, looters, assassins, paedophiles, and tyrants among men further affirms misandrist claims against the Nigerian man….

Is there any way we can hire this man to write a weekly column?