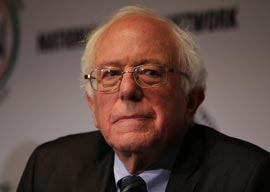 Last night, while perusing the periodicals, I read that Democratic presidential candidate Bernie Sanders held a rally inside a sweaty gymnasium somewhere in Conway, New Hampshire (which is a country, I think). Now, I”m not certain whether Bernie actually spoke or simply played a recording, since his message was stuffed with the by-now-stereotypical mantras railing against “fat cat billionaires,” corporate greed, and the D.C. machine. The thunderous applause at the end of his speech tells me that every single minion in attendance failed to detect the irony in Bern-stumper Ben Cohen delivering opening remarks and dishing out “free” ice cream.

There is simply so much hypocrisy festering and oozing out of this one single moment that it absolutely must be a new Ben & Jerry’s flavor, which is why I am now promoting “Bern & Geriatrics: Hypocrisy-Flavored Socialism.” It looks and smells like plain vanilla, but it actually tastes like crap.

Stay with me, people.

Bernie, who is a self-avowed democratic socialist, recently posted on his Facebook page, and I quote:

Let me be as blunt as I can and tell you that as a result of the disastrous Supreme Court decision in the Citizens United case, the American political system has been totally corrupted and the foundations of American democracy are being undermined. I wish I did not have to tell you that but that is the simple truth. That’s why I believe that we need to create a political revolution in this country.

I am actually inclined to agree, which is why I am moderately amused by Ben Cohen’s presence and the free ice cream at the rally.

“Didn”t Bernie say that we don”t need 23 different deodorant sprays while children are going hungry? So what about Ben & Jerry’s 66 flavors of ice cream and froyo?”

I get it”Ben Cohen does a lot of work in activism and charitable efforts. He’s probably even a fairly swell guy and uses his own body to shield baby fur seals from being clubbed to death by Wall Street investors. But he is not exactly Mother Teresa. The man has a net worth of over $150 million. Holy hell, folks”he is not just rich, he’s one-percenter rich! In the last election cycle, Mr. Cohen blew $66,874 on campaign contributions“that’s $14,874 more than the median annual household income in America.

It must be nice to make it rain on politicians like that.

Oh, and Cohen’s diabetes mill, Ben & Jerry’s, isn”t off the hook either.

In 2000, Ben Cohen and Jerry Greenfield sold Ben & Jerry’s to Unilever. Unilever is worth $129.1 billion, is ranked 113th in the Global 2000, is ranked 80th worldwide in profitability, and is ranked 56th in market value”globally. Unilever has accrued more wealth than the 50 poorest undeveloped countries combined. And on top of all of that, the fat cats at Unilever spent $2,422,132 in campaign contributions last election cycle”$1.7 million of which backed Democratic candidates.

Moreover, Ben & Jerry’s isn”t exactly a jobs program for the poor. You have to have a net worth of at least $350,000 to even be considered for owning a franchise”that excludes the majority of the American middle class. Additionally, you must pay up to a $35,000 franchise fee, pay annual revenues, and commit to a ten-year contract, and if you fudge out of the contract early, you owe the parent company money based on forecasted revenues. Do you think this is something that your average American can afford to casually walk into? Hell, no.

Didn”t Bernie say that we don”t need 23 different deodorant sprays while children are going hungry? I am pretty sure he did. So what about Ben & Jerry’s 66 flavors of ice cream and froyo? Why do we need that many choices? Aren”t chocolate and vanilla enough? Shouldn”t the choices be regulated by a government panel?

And besides, do you think that poor people can afford Ben & Jerry’s ice cream? The truly poor are worried about buying bread”they don”t have the money to buy friggin” ice cream!

You know who buys Ben & Jerry’s outrageously overpriced ice cream? Sunny-day socialist college brats and rich old liberals who want to “feel good” about buying their fat pills from an “ethical” diabetes mill rather than from a “corporate fat cat” diabetes mill like Coca-Cola.

And speaking of diabetes mills, why is Berndawg cozying up to ice cream companies in the first place? Doesn”t he know that America is ranked first in the number of citizens with diabetes per capita, first in the number of citizens with heart disease per capita, and second worldwide in percentage of the population that is obese? If he cares so damn much about health-care costs, shouldn”t he be discouraging ice cream consumption? If we all stopped eating garbage like ice cream, we could divert money away from lifestyle-related diseases and invest it toward treating and curing infectious diseases. I mean, health-care costs account for 17.9% of our GDP (more than any other country in the world)”don”t we need to eat less ice cream?

The Bern is either hopelessly naive and oblivious to all of this hypocrisy, or he is willfully complicit and part and parcel to it. Or he’s senile. One of the three. And we already have plenty of idiocy, lies, and senility in Washington”we don”t need more.