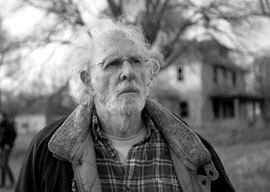 Will Nebraska, Alexander Payne’s modest masterpiece starring 77-year-old Bruce Dern as a taciturn ex-mechanic who stares like a senile prairie dog, somehow edge out frontrunner 12 Years a Slave for the Best Picture Oscar?

If it does, we’ll never hear the end of it. How often since Obama’s reelection have we been reminded that it’s long past time for stale pale males to exit the stage for the more vibrant?

Nebraska raises the question of how many talented ones are still out there. For example, you might reasonably assume that Nebraska’s script, a near-perfect blending of satire and sympathy, was written by Payne, the Omaha auteur with two screenwriting Oscars (Sideways and The Descendants). Yet it was actually penned by somebody named Bob Nelson.

All I can find on IMDb is that Nelson was born 57 years ago in Yankton, South Dakota. Officially, he’s performed on television four times in his life, and he has two previous credits as a writer”one for a children’s show with Bill Nye the Science Guy and the other for a few episodes of the instantly canceled Magic Johnson talk show.

Whoever he is, Nelson wrote the ideal script for Payne and his writing partner Jim Taylor to punch up.

Payne offered the best insight into why his last movie, The Descendants, with George Clooney as the scion of a landowning dynasty of royal Hawaiian ancestry, was merely a good one: “I’m from Nebraska and I didn’t know Hawaii at all or the complex social fabric there.” Payne wisely returns to his roots in Nebraska. He is a miniaturist who has only studied two places well enough to work his muted magic upon them: California (the setting for Sideways) and his home state (scene of Citizen Ruth, Election, and About Schmidt).

In a vaguely recent era before Ed McMahon’s Publisher’s Clearing House letters were rendered old news by Nigerian princes’ emails, the alcoholic curmudgeon keeps trying to walk from Montana to his home state of Nebraska to claim his million-dollar prize.

His son, played by Will Forte of Saturday Night Live as the mild-mannered audience surrogate, finally agrees to drive him, only to get waylaid by a family reunion with Dad’s five farmer brothers in their dying little hometown. The delay is OK with the old man because he can finally pursue his other fixation”retrieving the air compressor his more successful ex-partner (Stacey Keach) had borrowed in 1974 and never returned.

Woody’s boast that he has won a million dollars initially delights his relatives and former neighbors. Inevitably, though, the old-timers start to recall when they loaned Woody a few bucks to get by, what with his drinking and all, and seeing as how he’s now come into money.

His elder son (played by Bob Odenkirk, the criminal lawyer on Breaking Bad, who looks, as always, like Kevin Costner’s sleazy brother) shows up to explain that the sweepstakes letter is just Dad’s senescent delusion. But that doesn’t persuade anyone. After all, would you trust somebody who looks like Bob Odenkirk?

Unexpectedly, Woody’s nagging wife (an extremely funny June Squibb) leaps to his defense, threatening to dig up her exhaustive list of all the car repairs Woody had performed free for down-on-their-luck townsfolk. Nebraska plays out as the underside to a Charles Murray tribute to small-town neighborliness: Selective memories mean that everybody winds up aggrieved over all the favors they’ve done for each other.

Yet the movie goes on to make clear that old people squabbling over money is less about personal greed than concern for their soon-to-be heirs. Those on fixed incomes wanting to leave a little more to their kids”and the younger folks in Nebraska certainly look like they could use a bequest or two”have few moneymaking alternatives than collecting upon old debts.

In the climactic scene (which Payne and Taylor added to Nelson’s screenplay), the sons decide to put aside their lifelong resentment of their improvident father and strike a blow for family pride: They’ll steal back Dad’s 1974 air compressor! What could go wrong?