7 Stupidest Things Said by British MPs During the Trump Debate 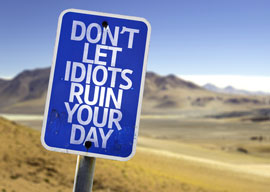 Monday saw arguably the most asinine debate by British parliamentarians that has ever been held in Westminster Hall. The debate was triggered by an online petition having obtained 573,971 signatures in favor of banning Donald Trump from entry to the U.K.”as if 0.9% of the British population taking to the Internet to voice their hurt feelings is either new or significant.

Chaired by Paul Flynn, Labour MP for Newport West and professional border-denying socialist quisling, this three-hour-long borefest made me truly embarrassed and ashamed to be British.

Just minutes into the debate, former Conservative minister Andrew Murrison referred to Trump as a “ridiculous individual,” much to the amusement of our MPs, as if 20-something-thousand liberals and immigrants voting for them gives them the moral high ground and vast, incontestable, and incontrovertible knowledge that the average British person could only dream of being blessed with.

The entire thing reeked of self-righteousness and arrogance, but what’s new there? Save yourself three hours and take a look at the seven stupidest things said by British politicians during this debate.

Jack Dromey, once the chair of the National Council for Civil Liberties, gave us an insight into his idea of a society that embraced civil liberties and freedom. As well as boasting about his previous chairmanship of the NCCL, Dromey told us that “freedom of speech is not an absolute.”

What a bizarre world Dromey must live in, where it’s wrong to allow people to voice their legitimate concerns about immigration, but right to lower the age of consent to 10 and to support the rights of pedophiles.

Minutes of a meeting held by the executive committee of the NCCL in 1976 were leaked by The Sun in 2014, and showed the group agreeing to lower the age of consent to 14, and to 10 in some circumstances. The NCCL was also officially linked to the Paedophile Information Exchange, which campaigned for rights for pedophiles.

Specifically, Mr. Flynn said that he would be delighted if Trump could show him where the no-go areas for police are, and that he”d like to take Trump down to Brixton to “show him the rich mixture of races and creeds that are living happily together there.”

Mr. Flynn clearly hasn”t spoken to the police who have confirmed that these no-go areas exist, or ventured very far into the Third World slums that exist throughout the capital city.  It’s also quite evident that he is unaware of how increasingly multicultural London is becoming more and more violent, with violent-crime rates going up by 22% in 2015.

Professional victim Tulip Siddiq claimed that Donald Trump’s comments equated to him “tarnishing the entire Muslim community with the views of a small group of extremists, the views of whom ordinary Muslims condemn.”

Aside from the obvious, which is that Trump has never claimed that all Muslims share the views of terrorists and “extremists,” the myth of a “tiny minority” of Muslims promoting “extremism” has been busted again and again.

Currently, the United States has 41.3 million foreign-born citizens. This is quadruple the 9.6 million from 1970. There are also 11.3 million unauthorized immigrants in the country, according to Numbers USA’s 2014 statistics, and those 11.3 million illegal immigrants currently make up 5.1% of the entire U.S. labor force.

Shutting the borders is bonkers, though. Victoria Atkins said so.