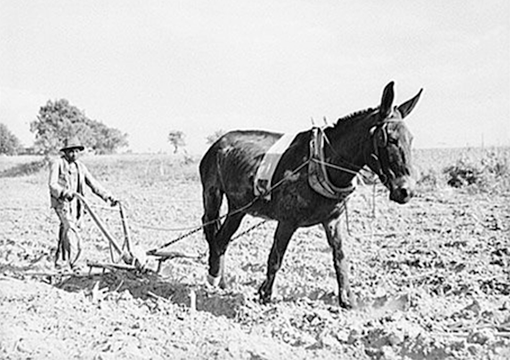 One thing I will grant American blacks: Despite the overwhelming historical evidence to the contrary, they still seem to believe that white people are their biggest threat and that if blacks were simply to separate from white people, they’d be capable of tremendous achievements.

Case in point: The American mainstream media, without a hint of skepticism or even a gentle guffaw, glowingly covered the news last week that two overweight black women in Georgia are spearheading an effort that led 19 black families to purchase 97 acres of undeveloped land southeast of Macon to establish a new, all-black city where black people can be free from the whites they claim are constantly terrorizing them and killing them, even though anyone remotely familiar with both interracial and intra-racial violent-crime stats would immediately realize her entire premise is a howling lie.

The first warning sign should have been that the two women, Ashley Scott and Renee Walters, were initially duped by a satirical ad placed by the dying town of Toomsboro, GA, that their entire city was for sale for $1.7 million, which, truth be told, is cheaper than midsized condos in most major American cities.

But undaunted and unashamed that they took a fake ad seriously, the two dusky chubsters soldiered on and found a plot of 96.71 acres near Toomsboro and decided that sandy little undeveloped patch of land would be the perfect spot from which to escape white racial terrorism and build Wakanda. And yes, they actually used a fictional comic-book land where blacks are capable of technological innovation as their template.

We figured we could try to fix a broken system or we could start fresh. This is how we build our new Black Wall Streets. We can do this. We can have Wakanda. We just have to build it for ourselves….I’m hoping that it will be a thriving safe haven for people of color, for black families in particular. It’s impossible to have anything exclusively black because our families are integrated. We are an integrated, tolerant and diverse community even as Black people, so we don’t intend for it to be exclusively Black, but we do intend for it to be pro Black in every way. So much land was stolen from black people. So much land was stolen from indigenous peoples. So, to be able to come back and reclaim this land from whoever may have had it, because we don’t know the story and that’s the reality.  We don’t know so many of our stories, but we can make a new story and that’s what we hope to do here.

Er, name one patch of American land that was “stolen” from black people.

“Keep convincing yourself that your comic-book Wakanda is right around the corner. I’ll be laughing all the way to the foreclosure.”

Scott also told CNN that the shooting of Ahmaud Arbery in southern Georgia, which upset her to the degree that she sought to establish an all-black city, happened while Arbery was jogging—a provable lie that CNN did not bother to question. And if she’s really concerned about black safety, I didn’t see Scott mention that Arbery had a prior conviction for bringing a gun to a basketball game. And I’d wager that she would never mention that George Floyd had a conviction for holding a pregnant black woman at gunpoint.

Possibly aware that the fledgling town she wants to name “Freedom, GA” would be an illegal enterprise if it excluded whites, Scott said that the town would be open to “pro-Black” whites:

We just want to have a space, a place where black people and pro-black people can live and breath [sic] without the injustices we are facing in our current cities and societies.

Real-estate investor and Scott’s partner Renee Walters also pretends that the biggest threat to her black sons is something besides someone else’s black sons:

We both have black husbands. We both have black sons. And I was starting to get overwhelmed and have a sense of anxiety when my husband will leave the house to go to work. So, it was like, OK, what can we do? And once I saw the post of Toomsboro going viral, about a town being on sale, I was like, “Oh, this is perfect”….We thought it would be a five to ten-year process, but with the outpouring of support that we’ve gotten we can make this happen much faster. As soon as we can acquire the land, the people, the bodies we are going to be pushing this.

Many of the absurdly reverent news stories mentioned that this is not the first time an all-black American city has been attempted. Scott chimed in with her thoughts on this: “There’s so many former Black cities. We hope that we can be one of those as well.”

Jeepers creepers, maybe it would help to see what happened with those cities, eh?

Mound Bayou, MS, was established on 840 acres of Mississippi swampland in the 1880s as an all-black enclave. It remains 98.6% black. Nearly fifty percent of its residents live below the poverty line, and the per-capita income is $8,227.

Eatonville, FL was established in 1887 as an all-black city. It remains nearly 90% black and only 7.5% white. Per-capita income for the town is $11,257—how much of that slight bump in income compared to other historically all-black towns is due to the influx of white residents is anyone’s guess.

Black nationalists and their countless enablers like to tell the story of the “Black Wall Street” in the Greenwood section of Tulsa, OK and how feral mobs of racist whites burned it to the ground. But if you search historical accounts of what set off this huge race riot, every page I found online says it started when “shots were fired,” but they ALL neglect to mention it was a black male who started firing and that 10 whites were killed in the gunfire.

And why was it called the “Black Wall Street?” Did it boast an international financial exchange? No, it merely hosted about 100 or so modest black-owned businesses that were all destroyed in about 14 hours of rioting.

There has been nonstop rioting in America for three months, and yet the original Wall Street in New York still stands. Is it possible that comparing Tulsa’s modest black business district to New York’s Wall Street was a bit of compensatory hyperbole?

I found it impossible to unearth average life expectancy in any of these Historical Wakandas, but this stat screamed out loudly above all the others—the average per-capita black American income is $23,303—more than TWICE the per-capita income in all these black-run spaces that are designed to be safe from imaginary white looters.

The average black life expectancy in America is 75 years. How does that compare to black-run nations across the planet?

In Haiti—which was established after a slave revolt committed white genocide on the island—the average life expectancy is 64 years, and the per-capita income is only $719 yearly.

In Liberia—which was established when some white American do-gooders assumed that ex-slaves would perform better if repatriated in Africa than if left to suffer around white people in America—nominal per-capita GDP is an abysmal $297 yearly, the third-lowest in the world. Life expectancy at birth is around 57 years.

So in every historical case where blacks attempted to shed the White Yoke and prosper by themselves, they wound up dying younger and under far inferior economic conditions than if they’d simply decided to live around white people and deal with all that oppression and racism.

Sorry, but 97 acres and a few hundred Mulignans are not going to accomplish anything, at least not if the historical record has any predictive value.

But sure, keep convincing yourself that your comic-book Wakanda is right around the corner. I’ll be laughing all the way to the foreclosure.