A Bleak Future for Jews 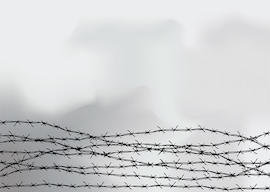 Ah, Congressman Steve Cohen—what a yukster! Two weeks ago, he had us in stitches by eating a big ol’ bucket of KFC when Attorney General Barr was a no-show to his witch trial (see, Barr was chicken! Get it? Get it?).

And last week, Krazy Kohen issued a press release slamming one of my Takimag columns as “racist and anti-Semitic,” while demanding the removal of the Tennessee judge who’s being hounded for posting it. Representative Cohen, a.k.a. “Colonel Slanders,” is the creator of the Tennessee Holocaust Commission, which apparently memorializes all the Holocaust victims murdered by Tennesseans (“Nevah forget the Gräcelandt camp…the woist camp of all!”). Cohen singled out one segment of my April 2 column, in which I opined that Jews need to “get the f— over the Holocaust” (I’m watching my cussing this week as a favor to a friend).

In the massive controversy that, for two weeks now, has dogged the judge who posted that column (a controversy that’s led to pieces in the AP, The New York Times, The Washington Post, Newsweek, and damn near everywhere else), it’s that one phrase—“get the f— over the Holocaust”—that’s continually singled out as proof of my “racism and anti-Semitism.”

So, let’s talk about that phrase.

Now, I absolutely think the column speaks for itself, but only one of the dozens of journalists who covered the story actually linked to it; the other hacks didn’t trust their readers to view it for themselves. Here’s the abstract: The fear of being Holocausted by whites is driving the Jewish community to suicidal self-destructiveness. As I wrote in January 2018, the “healthy, virile hate” that Elie Wiesel counseled all Jews to forever cling to regarding the wrongs done to them during the Holocaust has metastasized into something truly destructive. An overwhelming number of U.S. Jews support flooding the nation (and the West in general) with Third World immigrants. Not in their specific communities, of course, but in the parts of the country that are seen as being too dangerously white.

If I could trace the origin of my essay, I’d go back to 1987, when I read a Heritage Foundation paper by Joshua Haberman, former senior rabbi of the Washington Hebrew Congregation (Reform) and president of the Foundation for Jewish Studies. The paper, titled “The Bible Belt Is America’s Safety Belt,” cautioned Jews to stop being so paranoid about white Christian Americans. I corresponded briefly with the good rabbi, who told me he was becoming increasingly alarmed by the paranoid streak he was seeing in some Jews, an irrational fear that white Christian Americans, if allowed to congregate in large numbers, would one day start slaughtering Jews again for no other reason than biological and theological imperative. Haberman aptly dismissed that notion as hogwash.

“Let’s move on, and stop punishing the West by using the Holocaust as a tool to promote mass immigration.”

Sadly, that irrational fear has only grown over time. I doubt I’d ever seen it as strong as when Trump got elected (“He’s going to gas us all!”). It didn’t matter that throughout his life, Trump had always been a friend to the Jews. And it doesn’t matter now how many times Trump as president has veered from his agenda in order to do a solid for Israel. Nope…he’s still Hitler.

I argued in my column that the obsessive support Jewish Americans give to unchecked Third World immigration harms Jews as much as anyone else, because it gives us Jew-haters like Ilhan Omar and Rashida Tlaib.

“Get the f— over the Holocaust” was meant to sound harsh, because the gentle prodding guys like Rabbi Haberman employed didn’t work.

Let me try to put it in very personal terms. As my regular readers know, in late January of this year, my father, an 83-year-old veteran, passed away due to hospital error. It’s been almost four months now, and I’m far from over it. When my mom died in 2015, I was able to be at peace with it, because her death was natural. No one caused it, no one was to blame, and she died from a disease for which there’s no cure. I accepted it as part of the natural course of events.

But my dad? People were to blame, and at one of the supposedly “best” hospitals in the U.S. So in his case, there’s sadness and anger. And right now, if anyone were to tell me to “get the f— over it,” I’d break their nose. But okay, indulge me in a hypothetical. I don’t have kids (thank heaven), but say I did. Say I had a big family. And say it’s 2029 and I’m neglecting my wife and kids and just generally being destructive to myself and those around me, and anytime anyone calls me out on it, I snap, “My father died unnecessarily! I have every right to indulge in grief.”

You know what a good friend would tell me in that situation? “Get the f— over it. It’s been ten years. Your anger, your bitterness, is ruining your life and the lives of those who love you. It’s time to get past it.”

I dare you to say that isn’t the best advice I could receive in that situation.

Well, that’s the advice I’m giving my fellow Jews. It’s been 75 years since the Holocaust. And that stubborn, pervasive “virile hate” is helping to forge a bleak future for us all. If Jews think they can forever stay immune to the effects of the Third Worlding of America, well, open your damn eyes. Or just look at the situation in France. How are Jews doing over there since Muslim immigrants began pouring in? Better? Or worse? “We must support immigration because the West must never again return to the white supremacy of old.” Hey, if you didn’t like the historical West, wait till your kids experience the future one, with Muslim majorities in major European nations, and an America awash in Third Worlders who dismiss Jews as white and the Holocaust as a “white on white” problem.

I live in Beverly Hills. Whites (Jewish and gentile) and prosperous Persian Jews are the majority here. We don’t have gangs, we don’t have drug houses and welfare hotels, and we don’t have areas that are unsafe to walk in at night.

But California’s governor, Stalin Newsom, with the support of pretty much every Jewish Democrat in Sacramento, is in the process of forcing us to build low-income Section 8 housing for indigent immigrants. And how are we handling it? Take a guess. In March, our mayor, John Mirisch, compared Newsom and the Sacramento Dems to Haman, one of the greatest villains in Jewish history. He urged a packed, cheering crowd of Purim revelers to use their graggers—noisemakers used at Purim to blot out the name of Haman to show our contempt—to similarly blot out the names of Newsom and the other Sacramento politicians.

I can’t stress this enough: In Jewish history, Haman is considered even worse than Hitler, and the mayor of Beverly Hills compared Newsom to Haman. All because he’s trying to force us to import slums and slum dwellers.

But people like Mirisch only oppose “Section 8 multiculturalism” when it impacts their Jewish constituency. Where’s that righteous Hebraic outrage when white Christians in North Dakota or Minnesota or Maine are ordered to take in a bunch of foreigners with no ties to the community and completely different beliefs and ethics, because “diversity will make you stronger!”?

“You,” not us. Try to import “diversity” to our communities? You’re Haman!

And yes, I do think a lot of this has to do with Elie Wiesel’s “virile hate” over the Holocaust. “Damn lousy white Christians…they deserve to have their communities diluted.” The problem is, Jews will not be spared by the immigration monster we’re helping to create. That was the point of the essay that Congressman Cohen felt such a strong need to denounce.

That is not sane.

To be sure, many “conservative” Jews would probably denounce my column too. Pundits like Beanie Baby Benny Shapiro love telling blacks to “get over” slavery. “Get over it! You got welfare; that’s your reparations. Be thankful, and move on” (they say this even as they also claim that welfare has wrecked the black community). Compare welfare to what Jews got after the Holocaust. We got stuff that no group that has suffered a similar catastrophe has ever received. The leaders who tormented us were put to death. Thousands of accomplices were beaten and killed, and those who got away were hunted for decades. The nation that authored our woes was subjected to several years of terror under a revenge plan hatched by FDR’s Jewish treasury secretary. Millions of women were raped by occupying forces, and thousands of civilians were tortured by Jews in “vengeance camps.” The offending nation was split in two. Half of it was tormented for over forty years by communist oppression, and in the other half, we got to rewrite their schoolbooks and dictate their politics. And today, that nation imprisons anyone who insults us or our Holocaust. We got perpetual reparations up the wazoo, we got Israel, and we have museums and commissions that commemorate our suffering in every major city in the U.S., a country that had nothing to do with the Holocaust.

But still that’s not enough. We’re pissed that some Nazis got away. “Yes, Nazis were executed and tortured, but some came here and worked for NASA. OY!”

The hubris. Most persecuted peoples get zero justice. We got, let’s say, 85% justice, and it’s still not enough. Rather than being satisfied, we bitch about the few instances in which we feel robbed. Meanwhile, where’s any justice for the victims of Mao? Leopold? Stalin?

We got justice, and we got revenge, in a world in which most persecuted groups get neither. So let’s move on, and stop punishing the West by using the Holocaust as a tool to promote mass immigration.

That is sound advice. And we Jews ignore it at our peril.