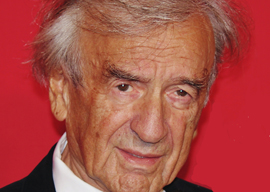 “What is it with you Jews, anyway?” asks Clint Eastwood’s shell-shocked Air Force pilot in the 1982 thriller Firefox. And damned if last week I didn’t find myself asking that exact same question. Now keep in mind—I am a Jew. A full-blooded descendant of a Brooklyn intellectual and a Beverly Hills surgeon. Jewy to the core (though not in the Ben Shapiro “hey look at my pretty little yarmulke” kind of way). And I’m long past being shocked by the seemingly suicidal and self-destructive agendas that left-wing Jews so often pursue. Flooding the West with Muslims who want to murder them, advocating policies that flood the streets with illegal aliens—some of whom would love nothing more than to see every Jew’s spiffy new Lexus hauled off to a Tijuana chop shop—bankrolling BLM thugs who would be tickled pink to see the Crown Heights pogrom or the Freddie’s Fashion Mart massacre repeated on a national scale.

As comedian Larry Miller pointed out in a Weekly Standard op-ed sixteen years ago, once you accept the fact that the lawyer for Hamas is named Stanley Cohen, there’s very little Jews can do to surprise you anymore.

Or so I thought. My apologies, Larry, but your example just got one-upped.

Last Tuesday, CNN’s Wolf Blitzer got into it with Republican Rep. Ted Yoho over the issue of migrants from “shithole countries.” At a certain point during the interview, the conversation turned to whether or not the U.S. should prioritize skilled immigrants over those whose skill levels don’t rise above being able to shit in a hole. The congressman suggested that U.S. immigration policy should return to the days “when we brought in workers that had specific skill sets.”

That led to the following exchange:

Blitzer: My…my parents came over the same way. They didn’t have many skills, but they achieved a great deal, because this country gives these people great opportunities.

Blitzer: So you can’t ban these people from coming to the United States, right?

Wow, that Ted Yoho is one tough debater! I haven’t seen a Republican check out that quick since Budd Dwyer. With guys like Yoho on his side, Trump’s gonna get that wall built in no time!

“Apparently you can spit on the grave of a Holocaust survivor if by doing so you make it easier for a Mexican drug dealer to wreak havoc north of the border.”

After watching the interview, I was not so much interested in Yoho’s white flag on the skilled-immigrant question as I was in Blitzer’s family history. See, I knew the guy was raised by Holocaust survivors. But that’s about all I knew, so I looked a little deeper, and I saw that Blitzer’s father, David (who passed away in 2002), was a Polish Jew who was interned by the Nazis when he was in his early 20s. The man survived Auschwitz and a series of smaller labor camps. Well, that told me volumes. A Polish Jew? As Goebbels so cavalierly remarked in his diary, if Polish Jews were unskilled, they were toast. An adult Polish Jew sent to a labor camp instead of the death factories at Treblinka, Sobibor, Belzec, or Chelmno was, by definition, a skilled worker. But I dug even deeper, and I found the audio-recorded postwar testimony of David Blitzer.

The dude spends damn near half the testimony bragging about how fucking skilled he was! How he, in fact, became invaluable to the Nazis because of his unique (and, for the time, cutting-edge and highly sought-after) railroad engineering and management skills. The man’s skills literally saved his life. In his own words, the Nazis classified him as a “specialist.” He was a highly skilled worker, and he says so again and again in his testimony. After the war he stayed in Germany, where he got married to another survivor, and the two of them brought young Wolfie into the world while living in Augsburg in 1948. When the Blitzers eventually emigrated to the U.S. (legally, the elder Blitzer stresses), daddy Blitzer became a restaurateur, and then an expert home builder.

When Wolf Blitzer called his father “unskilled,” he was straight-up lying. David Blitzer’s skills were not only impressive, they were recognized as such by the Nazis, who specifically classified him as a skilled worker. Think about that for a minute…and try to wrap your brain around this stunning fact: The Nazis apparently had a higher opinion of Wolf Blitzer’s father than Wolf Blitzer does. Sure, they may have considered David Blitzer a verminous Jew, someone to imprison or expel, but at least they acknowledged that the guy was skilled, a “specialist,” and they kept him alive, reluctantly, because of those skills (no question it was reluctantly, because, as I said, Polish Jews were pretty much marked for destruction unless they had “value”).

But little Wolfie dismisses his dad as just another unskilled laborer.

So here’s the question I began to ponder after poking around the Blitzer family tree. What would make Wolf Blitzer decide to shit all over the memory of his Holocaust-survivor father, for no other reason than to push for the U.S. to be flooded with unskilled immigrants? Why is that so damn important to the guy, that he’s willing to dishonor the memory of the man who raised him?

This is a low point for leftist Jews. I would argue that this may indeed be the lowest point that any leftist Jew has ever managed to reach. Because, as sacred as the Holocaust is to the average Jew, and as sacred as Holocaust survivors are to the average Jew, apparently you can spit on the grave of a Holocaust survivor if by doing so you make it easier for a Mexican drug dealer to wreak havoc north of the border.

Now, normally when I “ponder” an issue in this column, I already have an answer, a conclusion, in my head. But in this case, I’m not sure I do. I’m not at all certain I can answer “What is it with you (leftist) Jews, anyway?” I mean, there are the obvious, “safe” answers. Most U.S. Jews are Democrats, and therefore every Republican president is to one degree or another Hitler, so any strategy that stalls their agenda is encouraged and accepted. Another “safe” answer is that Jews are “always on the side of the downtrodden and the underdogs” (at least when there are cameras rolling). If smearing a Holocaust survivor is necessary in order to secure U.S. citizenship for Julio the Mexican drug dealer, Boniface the Haitian AIDS carrier, and Bakari the Ebola puss-bag from the war-torn Republic of M’Bunghole, so be it!

But those answers don’t satisfy me…maybe because I’m not asking the right questions. Perhaps I should be asking, are Jews still fighting World War II? There was an episode of King of the Hill in which Hank confronts a self-styled “warlock” who believes himself to be a “14th-level sorcerer.” Facing down the basement-dwelling pencil-necked nerd, Hank says with a sigh, “Some of this isn’t your fault. A man can only take so many wedgies before he goes to pieces.” Did the Jews take one wedgie too many in Europe? After centuries of pogroms and expulsions, was the Holocaust the last straw? Will Jews forever carry a hatred of the West, a desire to see Western traditions and values subverted even at their own expense? As future Nobel Peace Prize winner Elie Wiesel wrote in Commentary magazine in 1962,

I cry out with all my heart against forgiveness, against forgetting, against silence. Every Jew, somewhere in his being, should set apart a zone of hate—healthy, virile hate—for what the German personifies and for what persists in the German. To do otherwise would be a betrayal of the dead.