A Deadly Strain of PMS 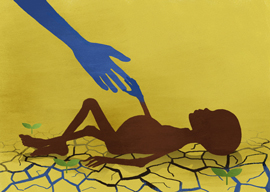 You know that one time a month when you”re arguing with a lady friend and she says something that makes your neck recoil in confusion? You”ll stop the fight for a second and think to yourself, “That doesn”t make any sense. What’s this argument really about?” If you”re very brave, you”ll ask her if she’s started bleeding yet, and if you”re really lucky, she”ll shut up because you just hit the nail on the head.

The liberal left has PMS. They don”t mean what they say and they”re just yelling for yelling’s sake. We now realize this because every time we solve one of their crises they pshaw the solution and continue the attack from another angle. Their crusade isn”t about getting to the truth. It’s about winning. The whole thing is just sports to them. We are the Yankees fans, they are the Mets fans, and it doesn”t matter which team plays a better game.

If you point out that Obama completely ignored Russia’s attack on a civilian jetliner, they”ll come back with, “Oh, you don”t think George W. Bush made mistakes when it came to Russia?” I”m not a Republican or a W. fan so I don”t understand why we have to jump back six years. I don”t care who wins. I just don”t like the idea of planes being shot down with no accountability whatsoever. We can”t even see the black box.

“We are killing Africa with kindness. Don”t any of these do-gooders give a shit? No. Caring is fashion to them. They could care less about the depressing reality of true poverty.”

Once you realize the left is bluffing, they become a great source for comedy. There are so many fake Salon Twitter accounts, it’s gotten hard to tell which one is real. They recently said Guardians of the Galaxy “fails women“ and I couldn”t tell if it was a joke or not. Feminism is over, P.C. is dead, and racism is a myth. Arguing with today’s liberals makes you feel like a cat toying with a mouse before he eats it. Unfortunately, these useful idiots are still ruining lives. Their hysteria still gets people fired and their programs still crush the people they”re trying to help. It’s hard to laugh when you see the havoc they wreak.

My favorite recent example of their total disregard for their own ideology is the #DearFeministMen meme. It was started by feminists to criticize men for participating in the women’s movement. When women claim they make less money than men or get raped more often, these beta males say “Damn straight, sister” and they still get told to fuck off. Isn”t that proof feminism has nothing to do with their belief system and is all about hating men? #DearFeministMen was hijacked by antifeminists, including #WomenAgainstFeminism, and became a comedy gold mine.

The same thing happened with Michael Bloomberg’s antigun group Everytown. They pretended to be a grassroots organization run by angry moms, but Bloomberg and his friend Warren Buffet’s net worth was impossible to obfuscate. When Everytown for Gun Safety began its campaign, gun advocates stole the name and made it about being a responsible gun owner. If Everytown was really about reducing gun deaths, they”d be in the hood talking to gangs and discouraging single parenthood. They”re not against gun violence. They”re against guns. As Derb says, “it wasn”t really about what it was about.”

When Bush won the election, Democrats screamed about voter fraud and said he had rigged it. They demanded more regulation. Now that they”re learning this might be bad for Democrats, they have completely changed their minds and insist that voter ID is racist.

Remember “No Blood for Oil”? We were told we have to look at alternative energy because getting oil from the Middle East is proving to be more hassle than it’s worth. “Good point,” thought the rational right, and the free market began tinkering away. Our own natural gas lies miles below the surface and trying to get it out of the rocks that trap it means digging enough holes in the ground to cause serious environmental damage. Then horizontal mining was honed to the point where one pipe can go down for miles and then turn 90 degrees like an Etch A Sketch. Today it’s affordable and safe to mine our own gas. Instead of celebrating, the “No Blood for Oil” crowd became more enraged and said this solution was going to contaminate the country’s water supply. When scientists explain that this process goes way below the water table they”re told it just isn”t worth the risk. Then environmentalists prove their point by showing us someone who can light their tap water on fire. This is where I lose my temper and scream, “THEY”VE ALWAYS BEEN ABLE TO LIGHT THEIR WATER ON FIRE. IT HAS METHANE IN IT. THAT’s WHY THE MINING COMPANIES WANT TO GO THERE!”

Too late. Fracking has been banned all over the Northeast just … because. In the movie Fracknation one of the farmers who lost out due to the ban sums up the whole thing when he says, “It’s almost like the media and the litigants want chemicals to appear in the water.” Exactly. They don”t want peace. They want war. Three years ago, I mentioned my neighbor upstate whose son joined the Marines and went to Afghanistan because fracking bans mean no jobs in our area. He’s very proud of his son, and he should be, but it’s worth noting where following dogma puts those who can”t afford to be so altruistic.

The Keystone Pipeline was another brilliant solution to our oil crisis. We get a good 15% of our oil from Canada already. Why not get it cheaper and faster? Well, for one, it would be too effective and we”d just end up having to export the excess. I don”t buy this argument for one second, but even if it was true, how is that a problem?