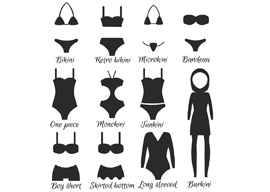 It’s hijab vu all over again.

Each “new” Muslim regalia hoo-ha”this week, it’s the French burkini battle“makes me feel like I”m trapped in Turkish Groundhog Day. You lucky Americans haven”t been screaming at each other about Islam’s wearable trash bags for anywhere near as long as we Canadians.

So you had some cunty Olympic fencer to deal with for a couple of days. What about us? Some say Conservative PM Stephen Harper’s sudden-death-overtime anti-burka feint threw the last election to Zoolander, despite astounding public support for the Tories” proposal. (When did you last see any poll question rack up 82 percent in the affirmative?)

But that’s nothing. Quebecers have been fighting about the face-covering niqab in particular for ten years; their cousins in France, for a generation. Yet these cases keep regurgitating in bulk, like Sisyphean shark-attack stories. Little wonder, as long as our rulers deign to focus on the sartorial symptom of the disease instead of its cause. Witness Harper’s last-ditch denunciation of a garment “rooted in a culture that is anti-women“”only after his party helped double the country’s Muslim population since 9/11, ignoring warnings from actual Muslims to cut that out.

Or look at France. Their reaction to massacres from Paris to Nice is to regulate beach attire rather than lock up treasonous imams, deport criminal Muslims en masse, and block new ones from entering.

Now, I defer to no one in my loathing of Islam. Its founder was a lowlife. Its book is a disordered bore. Its fruits, sterile and rotten. I still support Donald Trump’s ban on Muslim immigration even if he doesn”t, and have been calling for such an embargo for going on fifteen years.

But for much longer, I”ve been an anarchist at heart, long before I”d ever heard the word. And I find the notion of the state policing clothing, particularly women’s clothing, indigestible. (Particularly when said policing serves as an obvious occasional sop to we lowly “racist” peons.)

Not when that clothing refers to face coverings, mind you. The authorities should simply enforce long-standing laws against public mask wearing when Muslims are the culprits, but of course they rarely do.

Selective application of the rules in the name of Islamic appeasement reached a hilarious peak this month, again in Canada. Perhaps you heard about the couple who visited Victoria, British Columbia’s famed Victorian-themed garden and were refused admittance for appearing too…Victorian? This harmlessly eccentric pair dress exclusively in 19th-century garb, but Butchart Gardens says the wearing of period costumes violates their rules. The reporter, who asked the Gardens if, in the purported interest of “preserving their tranquil atmosphere,” divisive medieval niqabs were also forbidden, described that phone call as “the most bizarre interview I”ve experience in my 30 years of journalism””a career that has included taping himself successfully voting in a Canadian election while dressed in full Muslim drag.

On the subject of double standards, The Spectator‘s Gavin Mortimer“writing in support of the burkini ban”serves up chilling anecdotes about female acquaintances traveling in France being threatened and insulted by Muslims for wearing a sundress in one instance and jogging shorts in another. Mortimer warns that “the burkini is part of [the extremist Muslim] strategy…. Toleration of the burkini will only embolden France’s “police of mores” in their campaign of coercion.”

I know all this. And yet, back to my days as a teenage anarchist. When I wasn”t wearing my Catholic high school uniform”in its least perv-arousing iteration: an over-the-knee kilt and cable-knit leotards, whatever the season”I traipsed around town in Slits-inspired, man-repellent getups: long-john bottoms and army surplus pants topped with baggy “urchin” sweaters.

I didn”t wear (Bermuda only) shorts in public until I was over 30, sometimes using my sun-sensitive lupus as my alibi. And if I could afford to, and actually left my house enough to warrant it, I”d stock up on Solumbra’s SPF clothing, which includes full-sleeved rash guards and ankle-length swimming tights. If I wore those on a French beach, would I be ticketed too? Would Diane Keaton?