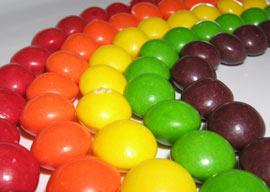 It’s official: Donald Trump, Jr. compared Syrian refugees to a bowl of Skittles candy, which means he’s Hitler, and so is his dad, and so are you.

Last Monday Trump’s son tweeted a picture of a bowl of Skittles that had the caption:

If I had a bowl of skittles and told you three would kill you. Would you take a handful? That’s our Syrian refugee problem.

The reaction was swift, harsh, illogical, and hysterical. A representative for Wrigley, which produces Skittles through the Mars candy company, explained to The Hollywood Reporter that “Skittles are candy. Refugees are people.” The New York Times scolded Trump Jr. by noting that “human beings are not Skittles.” The Memphis Commercial Appeal unequivocally stated that “Refugees are people, not Skittles.”

They’ve definitely heard of Nazis, though, because they never shut up about them. “Nazi Who Originated Donald Trump Jr.’s Skittles Analogy Was Hanged at Nuremberg,” shrieks the headline at The Intercept. The New York Times, which denied the Holodomorwhile it was happening but never misses a chance to call someone a Nazi, said that “comparing Syrians to Skittles carries echoes of the Nazi propagandist Julius Streicher comparing Jews to mushrooms in a popular children’s book that posited the ticklish dilemma of how to distinguish poisonous toadstools from edible fungus.” Haaretz bleated that “Nazi Propagandist Julius Streicher Would Be Proud of Trump Jr.” A writer for Stuff asserts that “this reasoning was first used by actual Nazis.”

“To deny that demographic changes lead to cultural changes”often detrimentally so, at least to the host population”is to deny reality.”

Accusing white supremacists of having a “strange…obsession” with Skittles ever since the Trayvon Martin case, a gay Syrian writes:

The idea at the root of the M&Ms or Skittles imagery is as old as Nazism itself….Skittles are being assimilated in a mysterious way into the coded language of white supremacy….What do Skittles mean for the white power movement that is slowly emerging into the mainstream?

Dazzlingly penetrating question, Mr. Gay Syrian. Let me know what your dogged research uncovers. Next time me and my White Brothers don our Druid costumes and pass around the silver chalice containing All-White Skittles, I’m going to grill them about the occult origins of this heretofore secret ceremony.

I don’t remember anyone on the left referring to radical feminists as Nazis a couple years ago when they used a nearly identical metaphor regarding male rapists and M&Ms.

And the roots of Trump’s tweet go much further back than the Nazis. The idea that one bad apple can spoil the whole bunch didn’t start with The Osmonds, you know. In 1736, Benjamin Franklin wrote:

The rotten apple spoils his companion.

And Chaucer’s Canterbury Tales, written in the 1300s but first published in 1478, contains a line that translates roughly like this in modern English:

About an old proverb, the words that say:
“A rotten apple”s better thrown away
Before it spoils the barrel.”

So even in the 1300s, the “one bad apple” concept was considered an “old proverb.” Saying that it has its roots in Nazi propaganda only makes sense for people who treat Godwin’s Law as if it were one of the Ten Commandments. For such types, the only evil, insidious, socially destructive virus that has ever existed is “anti-Semitism””a virus which, I might add, microbiologists have so far been unable to isolate.

Ripping a page from the playbook his father authored, Trump Jr. refused to apologize for the post-Skittles-metaphor outrage:

I”m not comparing someone to candy, I”m using it as a”it’s a statistical thing. We have to be careful who we let into this country. You”ve seen what’s going on in Europe”and this is not just about terrorists, it’s about the rape statistics that have gone on there….For me, I guess I’m a straightforward guy. I don’t deal in microaggression, where it takes a special kind of person to find whatever message they’re looking for.

Almost as if they’d all been handed the same press release with the same talking points, the Trumpophobes trotted out a study by the Cato Institute”a “right wing” think tank which they usually despise”claiming that an average American’s odds of being killed by a Syrian refugee in a terror attack were less than one in three billion.

Well, at least that’s how it’s gone so far with Syrian refugees in the USA. True, it wasn’t Syrian refugees who pulled off 9/11, Fort Hood, the Boston Marathon Bombing, the Chattanooga Shootings, the San Bernardino Massacre, or the gay bloodbath in Orlando.