A Five-Point Plan to Save the GOP 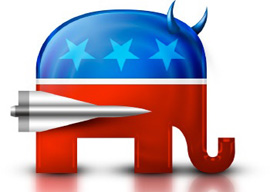 After the recent electoral debacle, Republican journalists and neocon news pundits have been discussing the roads to recovery for their battered party. One path that I”m sure will never be taken is trying to win back the libertarian and/or traditionalist right, both of which Romney managed to piss off. The evangelical inhabitants of central and northern Pennsylvania, many of whom considered the Republican candidate a low-octane Bam surrounded by foreign-policy nuts, stayed away from the polls this year. Moreover, many votes that went to Ron Paul in the primaries may have propelled Romney over the finish line in many of the states he lost, including such heavily blue states as Connecticut and Massachusetts. Although not all these voters abstained from casting ballots, it seems Paul supporters contributed significantly to a depressed GOP turnout in many places. In any case it was the Dems, not the Reps, who managed to energize their base.

But the Republicans prefer another narrative to the more obvious one. They bewail their inadequacies in not being able to win minorities” affection. FOX News and the GOP press have been turning out suggestions about how the GOP could attract more blacks, Hispanics, and single women, all groups that went decisively to Bam. Among the losers” modest proposals have been to grant amnesty to illegals, pay for birth-control pills, and treat abortion as a “private judgment.”

“It may also be wise if white men were hidden from view whenever Republicans hold a televised meeting.”

In a notable televised outburst of guilt, Mike Huckabee, in his Baptist clerical mode, expressed shame about his party’s failure to make blacks and Hispanics appreciate its candidates. This was attributed to a deep moral failing on the part of white (predominantly Protestant) Republicans. Given this group’s emotional need to enjoy the esteem of those who now reject them, I offer my own Five-Point Plan. I took the key term from Mitt’s presidential campaign. The spirit of moderation drives my suggestions”the very spirit that Romney never quite convinced minorities and single women that he radiated.

Point 1. The next GOP presidential candidate, assuming the Reps run another one after Romney’s humiliation, should begin his acceptance speech as follows: “I fervently embrace diversity with every fiber of my being and shall make it the cornerstone of my presidency if a rainbow coalition is kind enough to elect me.” The first part of this sentence is something every candidate for every college administrative post everywhere in the USA says.

Point 2. The keynote speaker at the next GOP presidential convention should be Sandra Fluke, the enraged feminist who tore into the GOP’s “war against women” at the Democratic Convention. This misogyny was supposedly reflected in Mitt’s unwillingness to let Sandra have birth-control pills at public expense. But not to worry! This feminist icon could announce at the next GOP Convention these glad tidings: Henceforth Republicans would favor having the government provide American women not only with birth-control pills (which is a true bargain at only about $9 a month) but with colored condoms, state-of-the-art diaphragms, and any other birth-control device for which the Democrats still haven”t agreed to pay. Sandra should then denounce the other party, not the Republicans, for its war on women, a policy that is seen in the way Democrats are restricting publicly financed birth control to insipid, colorless pills. A few subsidized erotic stimulators might also help make the GOP appealing to single women who want the state to pay for their meaningful experiences.