A Hero Only Once 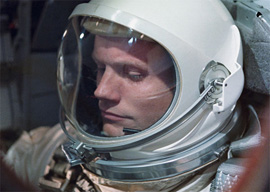 There was no television readily available when I heard that Neil Armstrong had passed from this world. In a hotel room hours later, I found that no news programs were mentioning him or his mark on history.

On NBC was a program titled Caught on Camera: Viral Videos”How? What? Why? My sentiments exactly. CNN had on its Newsroom, which seemed promising until I suffered five minutes of Don Lemon breathlessly hysterical over a hurricane that will likely delay the Republican National Convention. CNN International had the eponymous Amanpour with its host on another of her endless spiels about women in Sudan or some such nonsense.

Finally, I succumbed to Fox News, the purported “patriotic network,” hoping to find expansive news of Armstrong. Instead, I heard that someone (and no doubt dozens of innocent goat herders) had been killed in the interminable war of terror. In desperation I sought out the BBC and found Star Trek: The Next Generation. I have a feeling old Armstrong would have laughed at the coincidence.

“Society cannot credit our past accomplishments, for that would require admitting its current inadequacies

It is easy to be blasÃ© concerning the era commonly referred to as the “Space Race.” More than a few both then and now denigrated those who shot for the stars as little more than overdeveloped apes with prohibitive training costs compared to their simian earthbound forebears.

Bravery is not so much in the deed as in the decision. Standing before the maw of man’s ignorance and forging ahead alone, pausing on the threshold of a burning building and subduing fear to rush inside, or straddling Prometheus in the effort to stretch beyond the dust, is all the same. The conscious choice to force your hand toward the weightier balance of existence is the distinction, and Armstrong lived up to his name.

That alone did not make him great. Unlike others, Armstrong did not seek personal glory after his contribution to the mutual effort. He did not grab for personal power nor sell his votes to corrupt politicians in lieu of joyrides into space. On the contrary, he did what all great persons should do when the moment has been won: He simply and humbly went home.