A Miasma of Untruth 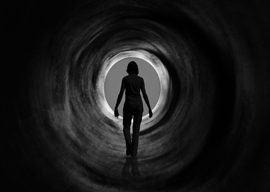 Those who irritate us and give us grounds for righteous indignation are our secret benefactors, for there are few states of mind more gratifying than that of righteous indignation. And therefore, in a certain way, I should be grateful to L”OrÃ©al, the enormous French cosmetics company, for having instituted the L”OrÃ©al-UNESCO “For Women in Science” laureate program.

In the arrival hall of Charles de Gaulle Airport in Paris there have for some time hung from the ceiling large and elegant posters publicizing these awards, showing women (mainly Japanese) at laboratory workbenches, with the words “Science needs women” emblazoned across them. The posters were still there when I arrived again last week.

“It would be no consolation to know while on a collapsing bridge and about to plunge into the deep ravine below that it had been built by a truly representative sample of the population, and was therefore a monument to social justice.”

One of the main glories of science is that it is universal, or at least approaches universality as nearly as it is possible for a human activity to do. Within a few years of Commodore Perry’s opening up of Japan to the outside world, Japanese scientists were contributing to the (then) new science of bacteriology on an equal footing with Western scientists. But that is not at all the same as saying that science needed the Japanese. It could have got on very well without them.

It is true, of course, that women are demographically underrepresented in the ranks of scientists, but so are many other groups. (This means, of course, that others are overrepresented.) This may be for more than one reason: lack of aptitude or interest, for example, or deliberate or subtle obstructiveness. But historical attempts to recruit scientists according to some demographic criterion or other have not been met with success, even as far as the advancement of science itself is concerned, and have been made by the very worst dictatorships that in other respects have been abominable. Social engineering and engineering are two very different activities. It would be no consolation to know while on a collapsing bridge and about to plunge into the deep ravine below that it had been built by a truly representative sample of the population, and was therefore a monument to social justice.

Suppose that, instead of Science needs women, other slogans based upon exactly the same logic hung over the arrivals hall: Heavyweight boxing needs Malays, for example, Football needs dwarf goalkeepers, Quantity surveying needs bisexuals, Lavatory cleaning needs left-handers: the absurdity of the argument would be immediately apparent. In fact the categorization both of human activities and humans themselves being almost infinite, the obsession with demographic representation as the most important criterion of fairness or social justice is virtually without end. The search for social fairness in this sense can lead only to perpetual conflict, much as the imposition of parliamentary democracy has done in countries in which it is not an organic outgrowth of their history, and as a true parliamentary regime in the European Union would very soon do.

Whether more women in science would result in faster scientific advance is an open question. It might but it might not. More scientists do not necessarily mean better or even more science. Are the women to replace men, or be additional to them? And a prize for women in science is inherently, though no doubt unintentionally, condescending. Good science is good science, irrespective of who has done it; and the prize brings to mind Doctor Johnson’s famous remark about women preachers, that they are like dogs walking on their hind legs: it is not well done, but one is surprised to see it done at all.