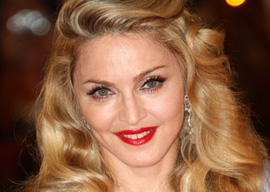 While the Northeast begins pulling itself out of the disaster that was hurricane Sandy, America now faces the horror of the presidential election. But another force of nature attempted on the previous Saturday to influence the coming electoral rite”Madonna, our very own “material girl.” While in concert in New Orleans, she harangued the crowd by declaring, “I don”t care who you vote for, as long as it’s President Obama.” She was booed for her pains.

Madonna has been booed twice before during this tour. On August 29, she received the same treatment from her Philadelphia fans for starting an 8 PM show two and a half hours late. The previous month, Parisians did the same thing“in this case because they had paid 280 euros for what turned into a ten-minute speech and 45 minutes of performance. So what’s up with our gal?

“She has gotten more press coverage for being booed than anything else she has done in the past few years.”

Madonna Louise Ciccone is a distant cousin of mine. Not only was her maternal great-grandmother a Coulombe”we are related in at least five different ways. So her antics throughout her career have alternately depressed, disgusted, and saddened me. Her various reinventions have seemed to be a perennially desperate cry for attention”and to be “relevant.”

In her 1991 documentary, Madonna: Truth or Dare, what emerges is a little girl lost, constantly trying to compensate for her early loss of her mother and her distant relationship with her father. The most revealing scene for me is that while playing the eponymous game with her backup performers, she declares that the great love of her life was Sean Penn. Considering their marriage’s violent nature, it speaks volumes.

This is a lady with problems, as her very public marital, religious, and political issues constantly show us. Her…um…romantic life has included such worthies as Warren Beatty, Tony Ward, Vanilla Ice, Carlos Leon, and Guy Ritchie. A cradle Catholic, she has often blasphemously misused the Church’s imagery, though shortly after Lourdes’s birth I recall her telling an interviewer that she was raising her child Catholic because it is the true faith. After that, she began her famous connection with LA’s Kabbalah Centre. Her political stands have been just as outrageous, echoing in their way Sean Penn’s, whose own quest for relevance has led him to venues as diverse as Hugo Chavez’s arms and making videos for the UN.