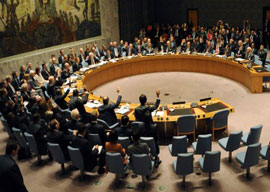 GSTAAD”From the top of the mountain that overlooks my Swiss chalet I can almost see Lake Geneva”on a clear day, that is, but thankfully what I cannot see are the armies of so-called diplomats, flunkeys, arms dealers, professional wallet-lifters, con men, thieves, and men who have been conceived by apes with a dose of the clap that go by the name of imams.

They are all here polluting the base of the Alps on the pretense of finding a peaceful solution to the Syrian problem, which is as likely as Portnoy renouncing masturbation. It is a joke to even call it a “peace process” when Iran”the region’s major power”has been excluded, but catamite so-called countries in the Gulf are here in force. An even bigger joke is the Saudi-Qatari demand of the right to withdraw the Syrian regime’s legitimacy in favor of the mercenaries that Wahhabi terrorism’s two petrodollar exporters are financing. But as I write, thousands of men are busy sitting on desks, translating texts, communicating with their governments back home, meeting nonstop with their own kind, and spewing out hateful rhetoric unheard of since the Nuremberg rallies. I write this on the second day of the so-called Geneva II. If it succeeds and peace comes to Syria, I will walk barefoot up Everest wearing only a jock strap and obviously die of frostbite in the process.

“In all my years of following Middle Eastern politics, I have never seen a more ridiculous situation.”

In all my years of following Middle Eastern politics, I have never seen a more ridiculous situation, where the weak and the cowardly but extremely rich”the Saudis and Qataris”have managed to upset the balance of power once the military genius of George W. Bush offered them the opportunity by doing away with one of the region’s few strongmen who had kept sectarian violence at a minimum. Everyone and their cousin who knew the difference between Iraq and Iran realized that once Saddam was gone the petrodollar pimps would flex their nonexistent military muscle. What was not obvious was that the pimps would use proxies such as al-Qaeda. The only man who stood in their way was Assad. Of course Iran was a problem, too, but that was quickly taken care of by our old friend Bibi Netanyahu, who for the hundredth time screamed wolf and got the Americans ready to nuke Tehran and the mullahs.

So far, so bad. After more than 100,000 dead and millions of displaced persons, the existential struggle between Sunni Muslims from Libya, Tunisia, Saudi Arabia, and Turkey”yes, Turkey”using al-Qaeda mercenaries and affiliates as well as other terrorist groups are facing Shiites from Bahrain, Lebanon, and Iran fighting with the Syrian army loyal to Assad. This writer is 100% for the Assad forces in view of Assad’s acceptance of Christianity and other religions, whereas the Sunnis will behead and crucify anyone not adhering to a strict Islamist agenda the moment power lands in their blood-dripping hands.

This is a post-American Middle East, with Israel momentarily set aside as the prime issue while the two sects punch it out. Iran is a major player but one that hasn”t formally invaded a foreign country since 480 BC, when the battle of Salamis turned sour on them. Yet John Kerry, whose efforts to rein in the Israeli settlers on Palestinian lands I loudly applaud, demands that Assad step down as a prerequisite to a successful peace treaty. He also fails to invite Iran to attend Geneva. It reminds me of a joke, that of a Jew and a Muslim sitting next to each other on a flight, the Muslim falling asleep and the Jew puking all over him during some air turbulence. Just before landing, as the Muslim woke up and looked at the mess, the Jew asked him, “Feeling better?” Just the money wasted in Geneva could rebuild Detroit in a year, and in a classical style to boot.