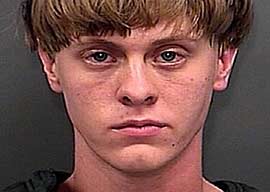 Last Wednesday night, nine black men and women were shot to death at Emanuel AME Church in Charleston, SC. As the young white male shooter was picking off his victims, he reportedly told them that blacks “had to go” because they were taking over the country and raping white women.

Anyone else get a sense that this is only the beginning of something huge and that it won”t end well?

The church sits only a half-mile from Fort Sumter, where gunshots started the Civil War.

According to officials, accused killer Dylann Roof, 21, confessed to them that the purpose of his attack was to start a race war. A friend also told ABC News that Roof had spoken of his desire to singlehandedly spark a race war.

As blacks like to say, shit’s about to get real.

Finally”after years of what seemed like an endless string of hate-crime hoaxes and other overblown cases where a fabricated or trumped-up white-on-black race-hate angle turned out to be dubious or nonexistent”America appears to have a genuine, bona fide white-on-black mass murder inspired by racial hatred on its hands.

This incident might be the one that, as the blacks are fond of saying, takes it to that other level.

“As blacks like to say, shit’s about to get real.”

This is not a Tawana Brawley or a Trayvon Martin or a Duke Lacrosse or a Mike Brown situation. As the story takes shape, this appears to be some blank-faced white loner with a Moe Howard haircut who reputedly pecked out an online manifesto clearly articulating his disdain for blacks and Jews and why he felt the need to kill them.

All the people who”ve been howling for years that America is a place where “black bodies” are routinely brutalized by whites finally have a case that possibly exceeds even their wildest dreams. I”ll bet some of them are pleased as punch.

In addition to claiming that Roof confessed to the murders, authorities confirmed that he was the owner of a website called Last Rhodesian, which failed to load every time I tried accessing it over the weekend, presumably because it was being bombarded with requests in the wake of last week’s massacre.

Pictures on the site purportedly show the glum, sullen, and not-all-there-in-the-head young accused race-killer wearing patches of the Rhodesian flag and the flag of South Africa during apartheid. He is also shown hoisting a Confederate flag, burning an American flag, and posing on a beach in front of a giant 1488 he”d presumably etched in the sand. It also shows him pointing a .45-caliber pistol at the camera, which is presumably the gun he allegedly used in Wednesday night’s killing spree.

The site also contains a 2,500-word essay that ends with an apology for any typos, perhaps making it the only killer’s manifesto in world history where the killer was at least considerate enough to care about grammar.

In the essay, Roof claims that the Trayvon Martin case “truly awakened me….How could the news be blowing up the Trayvon Martin case while hundreds of these black on White murders got ignored”? He avers that “Niggers are stupid and violent,” whites are “in fact superior,” and that America’s modern racial problems are due to “Jewish agitation of the black race.” He says that he considers Jews to be white, but that their “identity” is what leads to trouble. He suggests finding a way to “turn every Jew blue for 24 hours,” which would lead to a “mass awakening.”

And then comes what is essentially his declaration of war:

I have no choice. I am not in the position to, alone, go into the ghetto and fight.

I chose Charleston because it is most historic city in my state, and at one time had the highest ratio of blacks to Whites in the country.

We have no skinheads, no real KKK, no one doing anything but talking on the internet. Well someone has to have the bravery to take it to the real world, and I guess that has to be me.

Well, OK then. I suppose one can”t fault him for not walking the walk.

When I heard about last Wednesday’s spree, I thought of the 2010’s Hartford Distributors shooting, wherein Omar Thornton, a black former employee of a beer distribution company, shot eight white former coworkers to death before killing himself. Thornton’s white girlfriend would claim that he”d been taunted with racial epithets while at work, although even the nonwhite employees at the company denied that any such events ever occurred.