A Rape Hoax for Book Lovers 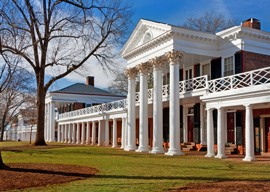 Numerous identity politics uproars, such as Ferguson, Trayvon, and Duke Lacrosse, have turned out to be humiliating fiascos for the national press when all the facts are finally toted up. Note that these were the mainstream media’s wars of choice, battlegrounds chosen to teach the public lessons.

What can we expect from the next crisis in the press’s pipeline, the purported fraternity initiation gang rape?

Jackie was just starting her freshman year at the University of Virginia when she was brutally assaulted by seven men at a frat party. When she tried to hold them accountable, a whole new kind of abuse began.

Here’s the tale that has been acclaimed across the country with barely any journalistic skepticism for the first 10 days.

A stone-cold sober coed named Jackie is lured by her date “Drew” to an upstairs room at the fraternity house. She is immediately tackled by one of the eight men waiting in the pitch darkness. Their toppling bodies crash through a glass table unaccountably left out in the middle of the rape room. Amidst the shattered glass, the young men beat her and hold her down on the floor. The shards grind into her bleeding back as she is methodically raped in the dark for three hours by seven young men, while her upperclassman date and another man coach them.

The frat boys egg on one reluctant pledge: “Don’t you want to be a brother?”

In other words, this is supposed to be some sort of fraternity initiation rite. (That fraternities at UVA hold their initiations in the spring, not in September, isn”t mentioned in the article.)

The last lad, whom Jackie somehow recognizes in the dark as a boy in her anthropology class, rapes her with a glass bottle.

“Wouldn”t the rapists get cut by the broken glass all over the floor, too? I guess they were such sex-crazed animals that they didn”t notice the glass cutting their hands and knees for the first three hours.”

What should we make of Erdely’s “brutal tableau“ of beer bottle rape amidst the shattered glass?

As a work of journalism, it’s most interesting for what it inadvertently reveals about the bizarre legends that seem plausible to American media consumers in 2014.

Some of the literary power of Erdely’s nightmarish retelling of poor Jackie’s saga stems from the writer’s use of glass, both broken and bottle, as an ominous multipurpose metaphor. Throughout “A Rape on Campus,” glass stands for fragility, bloodshed, loss of virginity, alcohol, littering, male brutishness, danger, violence”even a literal phallic symbol. Glass represents not the calm transparency of a window pane, but the occluded viciousness of the white conservative Southern male power structure.
For example:

The first weeks of freshman year are when students are most vulnerable to sexual assault. … Hundreds of women in crop tops and men in khaki shorts stagger between handsome fraternity houses, against a call-and-response soundtrack of “Whoo!” and breaking glass. “Do you know where Delta Sig is?” a girl slurs, sloshed. Behind her, one of her dozen or so friends stumbles into the street, sending a beer bottle shattering.

Strangely, just about the only people in America who don”t seem to have accepted at face value Jackie’s theory of a nine-man conspiracy to rape her are those portrayed in the Rolling Stone article as knowing the poor young woman well.

Much of this immense article is devoted to puzzling scenes in which Jackie’s friends and female mentors tell her to cheer up and get over it. If you read the article carefully, you”ll notice that almost everybody who knows Jackie closely treats her about the way you”d treat a friend who starts talking about having been abducted by aliens. You would try to find out what the real actual thing that happened to her was. But if she kept talking about alien rectal probing, you”d try to change the subject.

Morally, Sabrina Rubin Erdely and Rolling Stone should not have exploited an unsettled young woman.

Late in her first year at UVA, depressed and in danger of flunking out, Jackie talks to Dean Nicole Eramo, Chair of the Sexual Misconduct Board. This dean patiently explains to Jackie the three ways she can file charges, but Jackie can”t make up her mind. Eventually, Dean Eramo suggests she join a campus rape survivors” support group. There, Jackie makes new friends who appreciate her story (even though it’s more violent than their own).

In Erdely’s telling, Dean Eramo, a middle-aged lady, is a sinister figure, a sonderkommando who shields the rape culture by getting students to confide in her instead of exposing the vileness all about. But there’s a problem with the author’s interpretation: Jackie and numerous other young women love Dean Eramo. She listens. Jackie and others responded to the Rolling Stone hit piece against Eramo by writing a long letter to the college newspaper praising the dean.

My vague impression is that Jackie seems like a troubled soul who drew needed comfort from talking to listeners who were sympathetic. She doesn’t appear to have been in any hurry over the last couple of years to talk to people who might ask her tough questions about the validity of her allegations, such as police detectives or defense attorneys. That appears to have been prudent on her part.

Unfortunately, Rolling Stone was eager to use her for its own commercial and political purposes.

And so her story is now our latest national media crisis.

During her sophomore year, Jackie became prominent in the struggle on campus against rape culture. But the patriarchy struck back brutally last spring, using its favorite tool of violence, the glass bottle. Outside a bar at the Corner:

One man flung a bottle at Jackie that broke on the side of her face, leaving a blood-red bruise around her eye.

That’s horrifying … assuming it happened. Or are we deep into Gone Girl territory now? (There’s nothing in the article about anybody calling the police over this presumably open-and-shut case.) Erdely continues:

She e-mailed Eramo so they could discuss the attack”and discuss another matter, too, which was troubling Jackie a great deal. Through her ever expanding network, Jackie had come across something deeply disturbing: two other young women who, she says, confided that they, too, had recently been Phi Kappa Psi gang-rape victims.

A bruise still mottling her face, Jackie sat in Eramo’s office in May 2014 and told her about the two others. … (Neither woman was willing to talk to RS.)

Eramo had been listening to Jackie’s stories for a year at this point:

As Jackie wrapped up her story, she was disappointed by Eramo’s nonreaction. She”d expected shock, disgust, horror.

Erdely attributes this widespread ho-hum reaction among Jackie’s old friends and confidantes to a second massive conspiracy, this one to cover up the first conspiracy in order to protect that bastion of the right, UVA.

Erdely‘s explanation for why those who know Jackie best didn”t rush her to the hospital or call 911 or even pay much attention to her claims over the next two years is that the University of Virginia is an alien, hostile, conservative country club with an

… aura of preppy success, where throngs of toned, tanned and overwhelmingly blond students fanned across a landscape of neoclassical brick buildings.

The Rolling Stone writer is bothered by how UVA students look up to founder Thomas Jefferson (a notorious rapist of a black body, I might add).

Erdely finds offense in the campus honor code, by which students promise not to cheat on papers.

By the way, how conservative is UVA? In 2008, Barack Obama carried Charlottesville, home of UVA, by a sizable 11,600 votes. But Charlottesville is probably less extremely liberal than, say, Penn. So to Erdely, UVA is, basically, the Other.