A Road Test for Multiculturalism 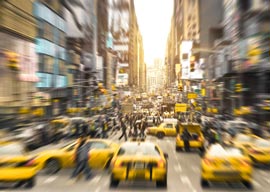 If you ever need to be reminded how superior the West is, just hop in a taxi. The drivers come from anywhere-but-here and pretty much all of them are ambassadors of suck. The days of the charming, loudmouth cabbie with the cigar stub and rude jokes have been replaced with rude jerks from Pakistan, Russia, Central America, and Africa. When they”re not driving like there’s a zombie apocalypse, they”re stinking up the cab, chatting on the phone, antagonizing customers, whining, and leaving bags of urine on the street. It’s not racist to be a Western chauvinist. I hate them all equally, especially the Russians. They are humorless ingrates who complain all the time like they didn”t just win the immigration lottery.

I had one the other day who must have been in his late 90s. I always ask, “How’s business?” to get the conversation going and he had nothing but complaints about all the fees he has to pay the company. I pulled out my calculator app and was shocked to see they total about $30,000 a year. “But what else can I do?” he shrugged with his tiny frame nearly devoured by a giant, leather seat (it was an SUV car service) “I am old and I don”t speak good English.” We kept going over the numbers and after multiplying his weekly wage by 50, I realized he makes $180,000 a year. Uh, you”re welcome, ÐÐ»ÐµÐºÑÐ°Ð½Ð´Ñ!

“You”re supposed to come to New York to get taken in by America not reject every aspect of its culture.”

I met another guy from that same car service who grossed $250,000 a year (my informal polling discovered the fancier car services make between $40 and $70 an hour). He did that by working every waking moment of his life. He started every day at 9AM and didn”t get back home until midnight. He did this seven days a week and had done so for years because, “Ees very hard but my girls need education.” Where, in Dubai? UT Health Science Center is $16k a year. This moron had denied his children a father so he could make five times the average American salary. What the hell are these assholes whining about? They”re rich!

Stupid is pretty much the best it gets these days. In New York, I recently walked up to my Ãber ride in the pouring rain and he shooed me away like I was a beggar. After checking with all the other cars and getting drenched, I went back to the first and explained that just because a female secretary books the car, doesn”t mean a woman will be showing up for the ride. He realized his mistake and told me it was my mistake as I got in the car. I completely lost it and screamed, “The customer is always right, you fool!” He met my volume with, “Dee customer ees not always right!” and we continued to scream at each other the entire ride. “You don”t get the fundamentals of Western civilization” I hollered, “and what’s worse, you don”t want to.” The anger never subsided and as he insisted he was right, I barked, “If you take a woman out to the best restaurant in town, have front row theater tickets, and she has a bad time, you screwed up! Nobody gets laid with your attitude!” He couldn”t get this through his thick skull because he is incompatible with America. That’s what you get when you institute a “What can our country do for you?” immigration policy. You”re supposed to come to New York to get taken in by America not reject every aspect of its culture.

I have never had a fight that loud and that long before and even cracked up a few times because it was so absurd. It was even kind of fun. What isn”t fun is the smell. Some airports have tried to issue smell tests and even told cab drivers to go home and change but they get accused of racism. My nose knows no color or creed. That’s my eyeball’s job. Despite being colorblind, my nose is often suffocated with body odor that fills the car like tear gas. My wife hates it when I bring it up but I”m not paying someone to fart in my face. I think what’s happening is they”re drinking coffee all night to stay awake and they don”t realize that without food, that much caffeine makes you digest yourself. I”ve tried explaining that it smells bad when you process fats but it rarely works. Many don”t even know what deodorant is. I”ve offered to go into drug stores and pay for their deodorant just to better humanity but these discussions are rarely that productive. It usually just comes down to insults and after decades of this same torture I”ve learned you need to be multicultural with your insults. In much of the third world, animals are a crucial part of being mean. It sounds absurd to us but “Your uncle is a donkey” will crush someone’s soul in Bangladesh. If we can”t make headway with the smell issue, when I get out of the taxi I like to say something like, “It is as though there was a goat in the car.” It usually elicits a mortified gasp and some pathetic retort like, “No, YOU are the goat.” Being called gay or female is also a great way to antagonize the annoying.