A Rolling Stone Gathers No Rape 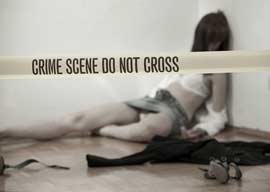 Despite what basic common sense would dictate, we are repeatedly spoon-fed the mantra that we live in a “rape culture.” And despite ample evidence to the contrary, we are told that women never lie about rape.

Despite the Tawana Brawley rape hoax and the Duke Lacrosse rape hoax and the fact that on any given day you can search the phrase “false rape” on Google News and dredge up countless stories of bitter, scorned, vindictive, psychotic women falsely accusing men of rape, the howling harpies of latter-day feminism and their gelded male worker elves continue to insist that false rape accusations are a patriarchal fiction.

That’s why the nuclear-reactor-level meltdown of that mossy old rancidly flatulent hippie rag Rolling Stone over an at least partially”and perhaps entirely”fraudulent gang-rape story at the University of Virginia is so exquisitely delicious.

The sprawling (9,000 words or so) Rolling Stone feature, “A Rape on Campus: A Brutal Assault and Struggle for Justice at UVA,” was published in mid-November but only began shattering and falling apart shard by shard before the whole world’s eyes last week.

“People don”t automatically disbelieve a woman who’s claimed to have been raped; they reflexively and blindly believe her.”

The article is a textbook case of putting the ideological cart before the factual horse. It is a mind-meltingly egregious example of journalistic malfeasance, of activists posing as reporters, facts be damned because by their own admission they didn”t even bother to corroborate the facts because they didn”t want to further traumatize the reputed victim.

The story’s author, Sabrina Rubin Erdely, once penned a Rolling Stone feature that sort of implied Michele Bachmann was to blame for an epidemic of gay teen suicides in Minnesota. Prior to “A Rape on Campus,” four of Erdely’s five previous articles for Rolling Stonewere pious defenses of the “transgendered,” those militant fairy-tale sprites who insist they”re what everyone knows they aren”t and what a simple chromosomal test would prove they aren”t.

Erdely claims to have applied the elbow grease and diligently searched for just the “right” college campus to do a story about rampant collegiate rape culture. She picked the U of VA, teeming as it does with what she somewhat scornfully refers to as “overwhelmingly blond students.”

The centerpiece of her article is a female student referred to as “Jackie,” who claims that she had attended a party on the night of September 28, 2012 at the Phi Kappa Psi fraternity with a frat boy named “Drew.” Without bothering to toss in an “alleged” or even a “Jackie says,” Erdely’s story treats Jackie’s rampagingly implausible narrative as indisputable fact.

According to Jackie, Drew led her upstairs into a “pitch-black” room, whereupon he and another male friend watched for three hours while seven men”Jackie had initially claimed to friends that it was five”brutally raped her amid shards from a glass table they”d broken at the inauguration of their assault. As Jackie’s story goes, one initiate who couldn”t achieve an erection raped her with a beer bottle instead. Jackie says she was told that gang rape was a time-honored initiation ceremony at the frat.

Jackie then wakes up alone in the room at 3AM and goes downstairs where the party is still raging yet no one seems to notice that she’s battered and blood-spattered, whereupon she takes a side exit out of the frat house that, as luck would have it, doesn”t even exist in real life.

With the fraternity still in sight, Jackie summons a group of friends, who despite the fact that she’s just been brutalized almost to death, discourage her from reporting the gang rape because it might make them all unpopular with the cool kids on campus.

(Later contacted by the Washington Post, one of these friends said that they had actually met up a mile from the frat house”not within sight of it”and that Jackie was not torn and bloody and that she”d only told him she”d been forced to blow a few of the frat boys. Last week as Jackie’s story began crumbling, several other reputed supporters of hers began distancing themselves from her, claiming they felt misled.)

Much of the article’s remainder is an extended indictment of the U of VA as utterly indifferent to the 900-pound Rape Gorilla that allegedly stalks its campus.

As one alleged fact after the other fell away like teeth out of a meth head’s mouth last week, Rolling Stone finally released a sort of half-assed retraction for not practicing due diligence and fact-checking all of the article’s wild allegations.