A Space to Destroy 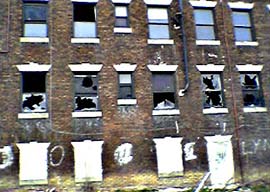 The smoke has cleared in Baltimore for now, and one of my favorite American cities is just a little bit less than it used to be.

I bear a lingering affection for Baltimore because it mirrors in many ways the Philadelphia of my youth. Both towns are so fundamentally shitty, the residents have developed a crass, resigned sense of humor unmatched anywhere else in the USA. Philly and Baltimore are a scant 100 miles away from one another and thus share that wretchedly mangled mid-Atlantic accent where every hard “o” sound is murdered. It’s impossible to sound intelligent when you have that accent. Both Philly and Baltimore are the only American metro areas I know of where restaurants regularly feature the culinary monstrosity known as scrapple on the breakfast menu. (I like to tell people that scrapple is made from the parts of the pig that were too disgusting to be made into sausage.) And once you get past the tourist spots, both towns are as hard as cement, mainly due to some of the most blighted and hostile black ghettos in the country. To me, Baltimore has always seemed like Philly’s little brother, but with a nasty case of the crabs.

I suppose it wasn”t always that way. Almost fifty years ago, country singer Bobby Bare appeared on The Porter Wagoner Show to croon “The Streets of Baltimore,” his dreamy paean to the town variously known as Charm City, Mobtown, and The Greatest City in America:

Her heart was filled with laughter
when she saw those city lights
And she said the prettiest place on Earth
Is Baltimore at night.

The prettiest place on Earth? Obviously that woman hadn”t traveled much. Even fifty years ago”prior to the 1968 riots that left huge permanent scars on the city”that notion was sort of a joke. In fact, I can”t ever imagine that this giant stinking pile of painted bricks ever quite qualified as “pretty.” Maybe it was pretty”relatively speaking”a hundred years ago when H. L. Mencken wrote for The Baltimore Sun. Compared to its current state of seemingly irretrievable dilapidation, perhaps it was a trifle more visually appealing in the mid-1800s when Edgar Allan Poe was cranking out his peerless horror stories.

But as long as I”ve been alive, Baltimore has been an eyesore. I was last there nearly a decade ago, and block for block it seemed to be pockmarked with more abandoned buildings than any major American city I”d ever seen.

Still, last week it got just a little big uglier.

Freddie Gray, like Michael Brown and Trayvon Martin before him, appears to have been a blundering fuckup. But as with the others, the blurry circumstances of his death were used by hordes of other blundering fuckups as an excuse to loot and beat and smash and destroy.

To those who”d refer to last week’s Baltimore riots as “unrest” or even an “uprising,” the sort of urban ne”er-do-wells who punched reporters and smashed police cars and looted grocery stores and burned buildings were merely reacting to the economic exploitation that capitalism had foisted upon them and the relentless brain-bludgeoning racism that has forced generations of them to squirm in pain under white supremacy’s pale, unforgiving thumb.

No one could be bothered to explain how the walking dead who occupy a terrifying quotient of Baltimore’s no-go zones were being economically exploited. Unless I”m missing something, such people typically don”t have many belongings worth stealing nor any job skills worth exploiting. Unlike feelings, dollars can be measured, and such types tend to drain more dollars from the public till than they provide.

And the already threadbare “white supremacy” narrative crumbles”at least to those who are willing to listen”when one considers that half of Baltimore’s 3,000 cops are black. It falls apart even more disastrously seeing as how the city’s mayor is a black woman. Baltimore’s police chief and city council president are also black. The Baltimore City State’s Attorney is a black woman, and last week when she filed criminal charges against six police officers that were in some way involved in Gray’s death, three of those officers turned out to be black. The most serious charge”that of “second-degree depraved-heart murder””was filed against a black male officer.