A Stick in the Eye for the Soft Invasion 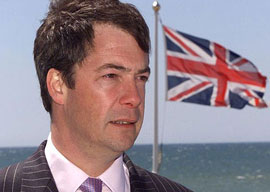 For the first time in 100 years, a British national election has been won by a party other than Conservative or Labor. Conservative: 24%; Labor: 25%; UKIP: 27%. It’s an historic result.

Let’s not get too excited. This isn”t the General Election, which decides the national government for the next five years or so. This is the election of our representatives to the European Parliament: that joke institution of faceless tax-and-spend bureaucrats who can issue 20,000-word directives on correct practices concerning hazelnuts. (No, I”m not making this up.)

Most people have traditionally taken little notice of the EU elections, since the European Union is so remote, incomprehensible, and boring. But this election has become a mighty protest vote, a cry of anger from the people, against the EU. And it’s the same story across Europe. The anti-EU, anti-immigration French National Front won 26% of the votes, the Danish People’s Party another 26%, Austria’s Freedom Party 20%.

The victors in Britain are UKIP”the UK Independence Party. They are led by the charismatic, beer-drinking, cigarette-smoking Nigel Farage, who likes to portray himself as a man of the people. He’s actually an ex-commodities broker, from a background as smart and privileged as that of most smooth-suited professional politicians nowadays. But he is in touch with what the plebes are thinking, an instinct that eludes most of his peers.

Farage does everything that politicians shouldn”t do. He dismissed a previous manifesto by his own party as “486 pages of drivel.” He refused to sack one of his members who referred to Africa as “Bongo-Bongo Land.” And he recently said that if he had to have a foreign family living next door, he would rather they were German than Romanian.

“We”re full up, and we”re fed up. The buses are full, the shops are crowded, our green and pleasant land is being concreted over rapidly thanks to the “housing crisis”: a crisis created by successive pro-immigration governments.”

Shock, horror! He was suggesting that not all foreigners are equal! The liberal lapdog media declared him finished”but people supported him all the more. They agreed that some foreigners are likely to be more civilized than others, but were too scared to say so out loud, for fear of hate crime charges from the thought police.

But people do have a hierarchy of preferences: always have and always will. They prefer people like them. Most English people would rather live next door to their own. They can converse over the garden fence in English, the wife isn”t hidden under a burqa, and they get the allusions to Monty Python sketches. So those who can afford it live in areas of Britain where this is likely to be the case.

If not English, Dutch or Danish neighbors would probably be OK”or German, despite one or two little misunderstandings over the past century. They behave much as English people would behave. This isn”t prejudice. Prejudice means pre-judging, without evidence. This is informed opinion. If the family is Romanian, they may well be gypsy too”or “Roma,” as we are now obliged to say. And they are factually more likely to steal. Romanians are now the fifth largest group of foreigners in our jails, squeezing in between Jamaicans and Pakistanis. The cost of our Eastern European prison population is now £73 million a year, kindly paid for by the British taxpayer whom they went to jail for robbing in the first place.
If our next-door neighbors are Somalian, Afghan, Nigerian, or Pakistani, they are statistically more likely to remove their wives” clitorises, to murder their daughters for being seen with a white English boy, to think that 9/11 or our own 7/7 bombings were a fine idea, or to behead a British soldier in a London street (see “Drummer Lee Rigby, death of”). Not all Muslims are terrorists, no; but almost all terrorists these days are Muslims.

The people of Britain do not feel, on the whole, that these new features of our national life have “enriched” us. And certain stripes in our happy-clappy multi-culti rainbow are directly at odds with each other. Our left-liberal establishment is pressing ahead with gay marriage, for instance: two gentlemen will walk up the aisle, and walk back down again as husband and wife. How is a traditional Muslim family supposed to “integrate,” to feel at home, in such a society? Have our leaders quite thought this one through?

UKIP has risen to the top because of all of this. Their triumph in the elections isn”t essentially anti-EU as such”although there are plenty of reasons to be anti-EU, for sure. To take an example: the European’s Union’s financial accounts have failed their annual audit for 18 years in succession. So many billions of pounds of European taxpayers” money go missing each year”into Mafia motorway scams, wind farm skims, and olive oil scandals”that the accounts don”t add up. The EU admits it “loses” around £100 billion a year, although it may be much more.

A vote against the EU is the only way a European voter today can vote against mass immigration, because the EU is all for it. Of all the dangerous pipe dreams of this this sclerotic, undemocratic, toxic socialist superstate, none has been more destructive than its Open Borders policy. “Henceforward there is neither Jew nor Greek, Pole nor Spaniard, Welshman nor Romanian gypsy, for ye are all one under EU directive!” And we can move into each other’s countries with instant benefits, free housing, and health care.

It’s a disaster. The flow of white English people to Bulgaria (annual GDP per capita around £4,000) is noticeably sluggish. The other way, it’s pretty lively. The population of Britain, a country much smaller than France or Germany, is approaching 70 million. We”re full up, and we”re fed up. The buses are full, the shops are crowded, our green and pleasant land is being concreted over rapidly thanks to the “housing crisis”: a crisis created by successive pro-immigration governments.

Our celebrated National Health Service we now refer to as the International Health Service, in our droll way. If you”re a white English native, and have law-abidingly paid your taxes for the past forty years, can you get an appointment to see your doctor? Yes, if you quietly take your place in the three-week-long queue behind the obese, wheezing Bulgars, the wall-eyed Estonians, the tubercular Turks and pregnant Nigerians …

Whoa there”surely not even the EU is as one-world and dumb as to think Nigeria is part of Europe? Well, not yet, no. But if a Nigerian, or Somalian, or Kurd can get into one country in the EU”like Malta, or Portugal”he or she can then walk straight into any other. And if a Nigerian lady gets on a plane in Lagos in an advanced state of pregnancy, and times it so her eighth or ninth little darling is delivered just as she reaches British soil, then the baby gets instant British citizenship. Brilliant!