A Timeline of Hate on Campus 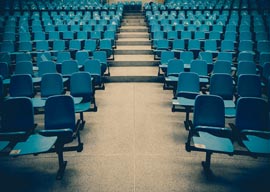 Finally, after at least a decade of white supremacy on campus, students of all colors are breaking free and screaming, “WE HAVE NOTHING TO LOSE BUT OUR CHAINS!” It took a lot of racism to ignite the unwashed masses of Ivy League students yearning to breathe free, but this is the week “Racial Discrimination Protests Ignite at Colleges Across the U.S.”

This revolution was born after innumerable attacks on visible minorities and everyone around them. A University of Missouri professor claimed on CNN that she”d been called the N-word “too many times to talk about.” I assume the context is the dean yelling something like “Hey, nigger, what are you doing in the snack room? Go teach your fucking class!” Maybe he has a whip, I don”t know.

As far as documented cases go, there aren”t that many. This is likely because”as it is with rape”we”re told most cases go unreported. Two African-American women of color at the Huffington Post have diligently gone through the cases, and at the University of Missouri alone we have: a student in 2004 accusing black students of vandalism; a cotton-ball incident in 2010; an insensitive flyer in 2012; and “just this year” alone, we have two”count them, two”incidents of swastika graffiti. One of them was even made of poo-poo! That’s almost a case every single two years! It sounds like being black on campus is almost as bad as being short, having a harelip, or having once accidentally farted very loudly in class.

Wait a minute, what the hell am I talking about? When did black people become such incredible pussies? I went through more oppression being a punk rocker. Nazi skinheads used to hospitalize us for wearing the wrong shoes. Someone is rude to people who look like you every 800 days? Those are chains? Let’s go over this timeline of hate and try to understand the unprecedented fragility of the kids today.

“On a Hate Monday that would make Garfield blush, the UM controversy exploded.”

Sept. 11, 2014
In a shocking example seemingly missed by the intrepid reporters at the Huffington Post, Payton Head, president of the Missouri Students Association and White House guest, claimed on Facebook that some rednecks in the back of a pickup yelled “nigger” at him. His claim turned into a diatribe about prejudice in which he explained that white students “are so privileged that you”ll never know what it feels like to be a hijab-wearing Muslim woman and be called a terrorist or a towel head.” It’s worth noting that MSA head Payton Head has never had a hijab on his head nor has he ever been called a towel head.

Oct. 10, 2015
Frustrated by the lack of action from Missouri University president Tim Wolfe, black student activists calling themselves Concerned Student 1950 (a reference to the first black students at the school) blocked his car and demanded he address their suffering (presumably to the backs of their heads). The group included Fresh Prince of Missouri Jonathan L. Butler, who is reportedly worth $20m.

Oct. 24, 2015
This is the day the poop swastika (or “scheisstika,” as John Derbyshire called it) was discovered.

Oct. 27, 2015
In a message apparently backed by Jonathan Holloway, Yale’s first black dean, the school’s Intercultural Affairs Committee sent out an email telling students it’s cultural appropriation to dress as anyone but themselves, even though Halloween is a 2,000-year-old white tradition where people dress up as anyone but themselves. This incident appears to be the spark that set off the campus hate fire across America.

Oct. 28, 2015
University of Louisville president James R. Ramsey had a Mexican-themed Halloween party that prompted outrage because people had sombreros on. He apologized for what the school paper described as “a completely wrongfully depicted culture,” and insisted, “We did not intend to cause harm or to be insensitive.” What a maricÃ³n.

This Halloween reached new levels of political correctness with “helpful” org charts telling white people what they can and can”t wear.

Oct. 30, 2015
The day before Halloween, Yale professor Nicholas Christakis and his early-education-expert wife, Erika, dared to question Holloway’s email and suggested we “reflect” on this “implied control.” She saw a lot of parallels with adult reactions and the way children behave. This did not go down well with the college kids.

Nov. 5, 2015
Nicholas Christakis, who also manages student housing, was attacked on campus by Jerelyn Luther, a black student who screamed, “Why the fuck did you accept the position?” and demanded, “You should step down!” Her home is worth $760,000.

Nov. 6, 2015
Greg Lukianoff literally wrote the book on free speech on campus. He was one of the people who filmed Christakis” confrontation and soon after held a talk at Yale to openly discuss the whole thing. Within minutes, an irate student tried to shut it down by screaming, “You people speak like you don”t know the history of the country that you pretend to love and you talk about burning Indian villages, which gets a lot of laughs.” The last part of this hysterical tirade was drowned out by uproarious laughter because it was a perfect example of a sentence being taken out of context. Lukianoff had said the reaction to Erika’s email was so intense, it was as though “she had actually wiped out an Indian village.” As the attendees left the talk, students spat on them.