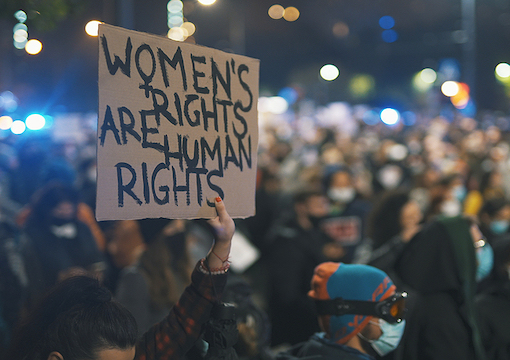 Sometimes you wish that a certain group of people were never taught a certain phrase. In 1997, when O.J. Simpson ran afoul of a civil trial, the geniuses in the press decided to teach ghetto L.A. the term “double jeopardy,” because provoking underclass blacks by making them think (falsely) that a civil trial following a criminal acquittal is “double jeopardy” is a great way to foment unrest.

So here’s my wish for the day: I wish no one had ever taught right-wingers the term “cui bono.” How I’ve come to hate that phrase, a favorite of conspiracy-minded rightists and libertarians. In essence, “cui bono” (“who benefits?”) is the main tool in the Lil’ Sherlock detective kits of amateur armchair sleuths who seek to uncover secret plots and nefarious dealings. The idea is, find who benefits from a thing, and you’ve found who caused the thing!

“For the GOP, the return of abortion is like an old friend showing up just when you need him.”

Years ago I wrote about how “cui bono” is one of the main reasons innocent people go to prison. Oftentimes, the “bonoing” is completely incidental to the crime (I cited the case of Sheila Bryan, who was falsely accused of killing her mother and sentenced to life solely because she was the mom’s insurance beneficiary. Turns out she was innocent; the “bono” was unrelated to the death).

Rightists love donning their sleuthin’ caps and using cui bono to trace an event to its evil plotters. “Obammer’s using that school shooting to promote new gun restrictions. Therefore, Obammer planned the school shooting!” “The Democrats are using Covid to take away our liberties. Therefore, the Democrats created Covid!” The latter is Tucker Carlson canon; he can no longer speak of Covid without adding, as if it’s an uncontested fact, that Fauci and “American bureaucrats” cooked up the disease themselves. Because BONO!

This is why the right is always two steps behind the left. And when I speak of “the left,” I don’t mean the moronic foot soldiers of BLM and Antifa. I mean the smart guys, the consultant class. As the right watches an event unfold and asks, “Who benefits?” the left watches that same event and asks, “How can I benefit?”

See the difference? Rightists are purely reactive. Something happens, and they say, “I’ll sleuth out who’s exploiting it.” Leftists are proactive. Something happens, and they say, “I’ll exploit it.” I can find you a thousand rightist bloggers who’ve carefully mapped out the “octopus” of George Soros money; where it goes, the harm it does. But I can’t get a single one of those fuckheads to help in the recall of Soros DA George Gascon, even though there’s so much that could be exploited to actually defeat “Mr. Octopus.”

Breitbart ran a half-dozen outrage pieces about Gascon’s decision to not contest the release of Sirhan Sirhan. Not one of them linked to the recall petition. Rightists complain; leftists effect change.

Soros, of course, is the master of exploiting. Now, sometimes he’ll actually cause a calamity (via, say, currency manipulation), but more often than not he simply watches world events and figures out how to profit from them. Soros didn’t cause the death of George Floyd. But he used it to install murderous pro-crime DAs and policies nationwide.

The left’s “bonoing” is not based on foreknowledge, but rather an instinctive ability to bono from stuff that just randomly happens.

That includes profiting from defeats.

The left did not want Judge Kavanaugh on SCOTUS. The left also did not want Ginsberg to die with just enough time for Republicans to squeeze one more justice onto the court before the election.

The left lost both of those fights, but not without a plan B for benefiting from the loss. Should the Texas abortion law result in a weakening or reversal of Roe—should it result in states having a freedom unseen since 1973 to restrict abortions—the left is gonna bono the shit out of that. Democrats are jizzing at the possibility of swing-state fights over abortion legality. Even though the American public is generally split (and has been for decades) on the abortion issue (roughly, the general consensus is, legal abortions but with restrictions), there’s damn-near unanimity (crossing racial, ethnic, gender, and income lines) regarding the need for an exception in cases of rape or incest.

And the Dems know that the GOP can’t control its newest Dick Mourdocks and Todd Akins—nutbags like Boebert and MTG. The Dems can’t wait for abortion to become a defining issue in 2024 (or even 2022), because they know that one or more members of the GOP straight-jacked squad will make a stupefyingly imbecilic comment about abortion and rape. It’s inevitable; I’d stake my house on it.

Lauren Boebert half-remembers something she read while getting her GED: “When Zeus raped women, the children became demigods! Rape is from God! Never abort demigods!”

As I said, inevitable.

The Dems need to take the focus off, well, everything—from Biden’s declining capacity to Harris’ incompetence to the border invasion, the Afghanistan debacle, inflation, etc. An election in which abortion is central, where the “rape exception” takes the spotlight, is their golden opportunity.

And as the Dems exploit public opinion, the right will do what it did during the Akin and Mourdock fiascos and try to overcome popular sentiment with sleuthing! Rightist blogger: “My investigation reveals that abortions due to rape rarely occur. Therefore, your emotional attachment to the ‘rape exception’ is invalid. Alter your emotional response!”

As always, the Dems will harness sentiment; the right will fight it.

And the Dems will win.

Now, it’s not just Democrats who hope that abortion dominates the next few election cycles. Con Inc. and the GOP establishment know that on this issue, they can win even by losing (i.e., if abortion costs them seats, there’s a greater victory).

One of the worst byproducts of the growth of the Cult of Trump (the MAGAs who worship the man, issues be damned) is that many people have forgotten that in 2016 Trump won on a focused and substantive platform: curb immigration. Stop the importation of low-IQ criminal detritus, and deport the detritus already here.

As Trump continually failed to follow through on his immigration pledges, the cultists who worship the man grew to be the only base he recognized, and the only base the media recognized, and what you had by 2020 was a bunch of acolytes who so loved the man they forgot what actually won him those swing states. Soon enough, the myth emerged that the magic resided in Trump and not his platform.

In fact, it was really quite a miracle that Trump prevailed in 2016. On paper, there was everything wrong with him as a candidate. And the GOP establishment, which of course never expected him to win, was hit with the bone-shattering realization that the issue of immigration restriction is so popular in vast swaths of the country, it could even carry a man like Trump to the White House.

This is a problem because Con Inc. loves unfettered immigration. So it’s vital that immigration not take center stage again (another way in which the MAGA personality cult inadvertently assists the Republican establishment: keep the attention on the man, not the 2016 message).

The GOP wants everyone on the right to forget how immigration won them their last big victory. And the best way to do that? Bring the doggy a beloved familiar chew toy to distract from the shoes you don’t want chomped.

For the GOP, the return of abortion is like an old friend showing up just when you need him.

If Roe’s overturned, in roughly one-third of the states there’ll be no change; either the legislatures are solidly pro-choice or the right to abortion is written into the state constitution. But there will be abortion battles in some of the most vital swing states. Non-college-educated whites—the group that carried Trump in 2016—are largely pro-life (education is a far greater predictor of abortion stance than gender). Abortion is exactly the issue to get those hicks and rednecks and Joe Sixpacks off the immigration scent.

Tossed back to the states, abortion will become a dominant issue in Ohio, Georgia, and Pennsylvania definitely, Michigan, Arizona, and Wisconsin most likely.

That’s exactly what Con Inc. wants: a return to the comfortable dynamics of the 1980s, when a pro-life Republican president could pass blanket amnesty, and where your most extreme party activists, like Operation Rescue, still spoke your language. You could manage them, they were friends. Unlike those vile America Firsters who care about demographics and population replacement. Their tongue is like Sanskrit to an establishment Republican; no familiarity at all.

Remember: These Con Inc. guys share DNA with those clever leftist consultants; they like being able to harness events for their benefit. That’s why 2016 was an earthquake for them. Trump summoned a mighty force—immigration disdain—that frightened them. There’s no détente with that force…it must be stopped. And Con Inc. realizes that if a river’s too strong to be dammed, you have to redirect it, give it a new course.

Abortion’s also a great way to beat back the flirtation with quasi-eugenics that accompanied the Trump 2016 agenda. Con Inc. can’t have people worrying about birth rates and bell curves, low IQs, high criminality, and what an overabundance of both does to a country.

Gotta lead them blue-collar shitkickers away from thinking about the nation’s genetic health. And what better way than to remind them how important it is to save every ghetto fetus with a recidivist criminal absentee dad, every third-world anchor fetus with functionally retarded parents, and every fetus with congenital or hereditary defects? Pro-life is damn near synonymous with dysgenic.

A few weeks ago pro-life darling and 2024 hopeful Kristi Noem was on Fox talking about abortion. Host Rachel Campos-Duffy has a daughter with Down syndrome, and Noem told her that “we need more” children like her daughter in America.

Pushing a message like “We need more Down syndrome babies!” is the perfect way to wean the right off any notions that the biological quality of immigrants matters. If “more Down syndrome!” is your literal rallying cry, if you’re saying that this would actually help the nation, how can you argue against trucking in tons of low-IQ immigrants?

Plus, “more Down syndrome in America” is exactly what the Chinese long to hear (they want us as genetically debilitated as possible). And heaven knows Con Inc. adores the Chinese.

So welcome back, abortion. I always loved the 1980s. I only wish that bringing back my flat stomach and well-defined jawline were as easy as resuscitating the decade’s political dynamics.