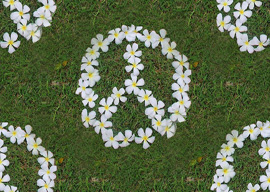 Despite the fact that we’ve given peace several chances only to be repeatedly disappointed, there’s always some wide-eyed new group willing to give peace yet another chance. Hence we have Pennies for Peace and Pinwheels for Peace, the latter a movement where participants “imagine…whirled peace!”

How might pinwheels bring peace, you ask? Annually, on the International Day of Peace, pinwheel peaceniks worldwide “plant” colorful whirling art forms in various and sundry breezy locations. The idea is that the “spinning of the pinwheels in the wind spread[s] thoughts and feelings about peace throughout the country and the world!”

In like manner, this past September airy-headed nonconformists from every corner of the Earth joined together to take a stab at global amity by participating in a communal event called Yoga for Peace.

According to Y4P organizers, “Yoga for Peace is the symbol of the paradigmatic shift in consciousness of the world” where, in unison, “participants…move to powerful drum beats while completing an invigorating practice of 108 sun salutations, or mala in Sanskrit. Upon completion of the mala, participants rested in savasana, a lying meditation, to form a human mandala, or peace wheel”—not to be confused with a pinwheel.

“Despite the fact that we’ve given peace several chances only to be repeatedly disappointed, there’s always some wide-eyed new group willing to give peace yet another chance.”

While yoga and colorful paper attached to a stick hold great potential to make the world a better place, probably the most creative effort thus far seeking to marshal mankind toward planetary accord unfolded in the most unlikely of places—Mexico.

Who would have thought that 300 professional clowns from a country notorious for drug cartels, gun-running, beheadings, border-patrol shootings, and illegal border crossings would propose a “15-minute non-stop laugh-a-thon” as their personal contribution toward making the world a friendlier, more loving place?

Mexican clowns, joined by fellow Central American payasos, gathered in Mexico City “for a four-day convention to trade jokes and hone skills like making balloon figures.” One would guess that the jesters probably shared gallows humor like: “What do you call 15 decapitated men outside an Acapulco mall?” Or, “How many dead mayors does it take to discourage anyone else from even considering a life in Mexican law enforcement?”

The event’s highlight was when the entourage gathered at Mexico City’s Mother’s Monument under a sign that said: “Clowns for Peace, A World Without Violence.”

Mother’s Monument appeals to peace-lovers everywhere. If a similar statue were ever to be erected on US soil, it would beautifully memorialize anchor babies’ ability to peacefully usher in amnesty for all the illegal Mexican mothers who throughout the years chose to flee the place where they hold the clown convention.

Nevertheless it was there beneath the image of Madre y el Niño that Mexican clowns gathered to pose for a group snapshot and then immediately set about the job of “laughing, tee-heeing and guffawing for…15 minutes.”

Much like those who spin pinwheels or waft their kundalini kindness through the universe, the clowns were convinced that a “world with more laughter will have less time or appetite for violence,” even if only for a quarter of an hour.

So as the drug war rages in Mexico, the Obama Administration’s Fast and Furious guns-to-cartels scandal heats up in the US, and the world careens toward a catastrophic end, it’s good to know there is a chortling group of devoted Mexicans who realize that peace is attainable through lotus positions, voluntary hyperventilation, and unbridled glee.

By the way, only a day after Mexico’s clown convention for peace, a bloody and violent end befell a clown known as the Mad Dog of the Middle East.