District 9, a violent science fiction movie set in a Johannesburg slum inhabited by 1.8 million feckless refugee space aliens, is the critical and commercial ($37 million opening weekend) hit of the moment.

Yet, few Americans (except the black critic Armond White, who has made himself wildly unpopular with fanboys of District 9 by pointing out the film’s strikingly caustic portrayal of black Africans) seem to grasp writer-director Neill Blomkamp’s subversive perspective, even though the exiled Afrikaner keeps giving interviews more or less spelling it out.

The American press constantly refers to District 9 as an “apartheid allegory,” but the 29-year-old Blomkamp was ten when Nelson Mandela was released. Blomkamp’s press statements can hardly be more explicit that the movie is largely a post-apartheid parable about illegal immigration and Malthusian despair.

In fact, Blomkamp is personally a victim of the gradual ethnic cleansing of southern Africa. Rampant crime under the new black government drove his family from Johannesburg to British Columbia in 1997.

But Americans just don”t get it because they haven”t paid attention to South Africa since 1994, when Nelson Mandela was elected President and then They All Lived Happily Ever After. Blomkamp told the Milwaukee Journal Sentinel, “Everybody in North America thinks of South Africa for white oppression of the black majority.” Yet, 15 years later, “what we”re not familiar with is this screwed-up Johannesburg setting.”

Just as 1981’s Road Warrior, with Mel Gibson as Mad Max, memorably re-imagined the defining Australian experience of living on an empty continent, District 9 symbolizes the lesson of Afrikaans history: on an increasingly full continent, the weak can eventually triumph over the strong by outbreeding them.

Much of District 9 is a video game-style shoot-“em-up complete with the predictable teaming up of the rebel human hero and the single smart, nice alien hero (the Mandela stand-in) to battle the evil corporation.

Nonetheless, what gives the film its distinctive ferocity is its bitter Malthusian wisdom distilled from the Afrikaner diaspora. History may be written by the winners, but some of the most bracing fiction”for example, Disgrace

, the 1999 novel about gang rape in the new South Africa by J.M. Coetzee, the Nobel laureate who fled to Australia in 2002″is written by history’s losers, such as the Afrikaners.

They ruled over the Cape of Good Hope’s yellow-brown Bushmen and Hottentots in the 17th and 18th Centuries, but then lost control to the British Empire in 1806. Trekking inland in hopes of freedom from the English, the Boers defeated and enslaved blacks fleeing south from the rising Zulu power to the northeast. The British conquered the Boer Republics” guerillas in 1901 by rounding up the Afrikaner women and children into concentration camps, where many died of disease. Nevertheless, the Afrikaners, with their big farm families, finally overcame the wealthier English-speaking whites at the ballot box in 1948 and formalized a system sometimes described as fascism for the blacks, capitalism for the English and the Jews, and socialism

District 9 incorporates much obscure Afrikaans lore. For example, the protagonist, a well-organized but obtuse bureaucrat who looks and acts much like Steve Carell in the sit-com The Office, is named Van der Merwe. That’s the traditional moniker for the Afrikaner butt of South Africa’s version of Polish jokes.

When Van der Merwe goes renegade, he’s hunted by a merciless mercenary, played by David James, named Koobus Venter. The message seems to be: Okay, we Afrikaners are dumb and evil, just like everybody says, but we do make conscientious bureaucrats and hellacious mercenaries. 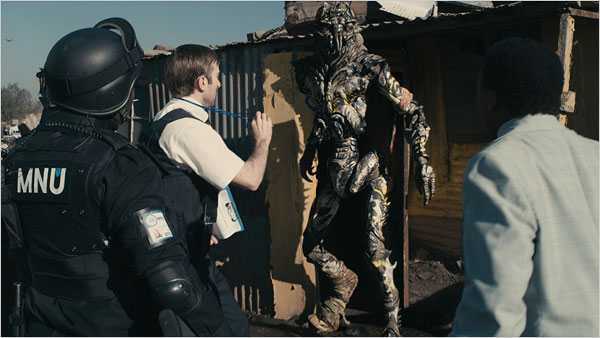 After the fall of the Berlin Wall, in November 1989, insured that a black government wouldn”t be so Soviet-beholden as to immediately kill the capitalist goose that lays the golden (and diamond) eggs, the Afrikaans elite decided, within three months, to do a deal with the 71-year-old Nelson Mandela while that statesman was still alive.

The system that emerged has been fine for those whites rich enough to afford ample private security, but unsurprisingly bad for the Afrikaans working class.

Uncertain whether the mineral-rich country will continue to lurch onward or will collapse like Zimbabwe after 20 years of black rule, much of South Africa’s skilled white middle class has departed for safer havens. For instance, Blomkamp, the son of an engineer, explained in an interview why his family moved to Vancouver when he was 17:

I”ve got a younger brother and sisters, and South Africa was pretty dodgy in the late “90s, so”actually, it’s dodgy now. It”ll just be continuously dodgy, but we moved so that they could not be in a state of violence all the time.

Exiled at roughly the same age as Vladimir Nabokov, when an adolescent can expect to have his native landscape permanently imprinted on his imagination, the displaced Blomkamp dwelled fancifully on his lost homeland. Amidst the beauties of Vancouver in summer, he meditated on the bleakness of the high veldt in the parched winter. Eventually, his dream/nightmare of Johannesburg shantytowns and razor wire-protected garden suburbs merged with his other obsession, science fiction:

In my opinion, the film doesn”t exist without Joburg. … [W]hen I got to Canada … I started to get more and more and more interested in Johannesburg, which must have been because I grew up there, but separate to that, it became this insane sociopolitical interest of mine. I actually think Johannesburg represents the future. … So the whole film grew out of a love-hate relationship with Johannesburg, really.

In District 9‘s backstory, a giant spaceship halted in the sky over Johannesburg in 1981. When humans finally opened it, they found malnourished, aimless 7-foot tall insects/crustaceans who look like a cross between the Bugs in Robert Heinlein’s Starship Troopers

Despite the interstellar technology that has brought them here, they seem kind of, well, dim.

Why are the “prawns” so lazy, disorganized, and prone to petty crime? The screenplay hints that, like the obedient Warrior Bugs in Starship Troopers who are useless without the specialized Brain Bugs, they are social insects. As Blomkamp spells out in an interview, “… the elite population of their society has died, which are really the decision-makers. You”re left with a bunch of drones …”

On the other hand, it’s also plausible that this could be the alien equivalent of the English convict ship that arrived in Australia’s Botany Bay in 1787. Or the denizens of “District 9″ could be analogous to the public housing tenants who”as Cabrini Green in Chicago’s Gold Coast was being torn down and replaced with luxury townhomes for yuppies”were dispatched with Section 8 rental vouchers to cheaper Illinois locations such as Bloomington and Champaign, much to the dismay of parents of small town public schoolchildren.

As a humanitarian gesture, the naÃ¯ve South Africans took the non-humans in. Nevertheless, the refugees” Idiocracy-like surliness and dumpster-diving shiftlessness led to public complaints, especially from blacks who had to deal with the newcomers on the street more than did wealthy whites in gated communities. So, the “prawns” were increasingly confined to the Soweto-like District 9 in Johannesburg’s slums.

What little enterprise is found in the alien township is generated by humans: cannibalistic, voodoo-practicing Nigerian gangsters who barter cans of (apparently addictive) cat food for the high-tech alien weaponry that the prawns are too directionless to use effectively. Salon interviewer Andrew O”Hehir was less clueless that most Americans in his interview with Blomkamp:

O”Hehir: You know, these images are pretty uncomfortable, especially for Americans who tend to be so careful in public discussions of race: Here’s a white guy from South Africa making a movie with scary, murderous black African villains.

Blomkamp: Sure, I”m totally aware of that. … Unfortunately, that’s the reality of it, and it doesn”t matter how politically correct or politically incorrect you are. The bottom line is that there are huge Nigerian crime syndicates in Johannesburg. I wanted the film to feel real, to feel grounded, and I was going to incorporate as much of contemporary South Africa as I wanted to, and that’s just how it is.

One of the purposes of Blomkamp’s film is to show black South Africans saying the same intolerant things that his own people were universally condemned for saying: “I wanted these impoverished black citizens of South Africa to have this disdain for another group.” Blomkamp’s six minute short from 2005 Alive in Joburg that served as a test run for District 9 has fun depicting black South Africans denouncing the newcomers in huge protest marches for bringing rape and murder to Johannesburg.

Another part of recent South African history that isn’t world news is that the collapse of Zimbabwe has introduced millions of illegal Zimbabwean immigrants into South African cities. … Now you have this powder-keg situation, with black against black … [W]e woke up one morning to find out that Johannesburg was eating itself alive. Impoverished South Africans had started murdering impoverished Zimbabweans, necklacing them and burning them and chopping them up.

In 2009, 28 years after the aliens” arrival, South Africa’s majority rule government has bent to voter demands and decided to relocate the prawns out of Joburg to District 10 (actually, a concentration camp). At this point, the courage of Blomkamp and his producer, Peter Jackson (director of the great Lord of the Rings trilogy and the self-indulgent King Kong) falters. Rather than have the ethnic cleansing carried out directly by South Africa’s sainted black government, Blomkamp and Jackson have the state delegate it to the usual malign Halliburtony-Blackwaterish corporation that we”re so familiar with from endless movies. (Blomkamp gives it the particularly lame name “Multi-National United.”)

Much of the plot proceeds on “Why can”t we all just get along” autopilot, but District 9 is ultimately a Malthusian fable. Blomkamp explains:

Q.: And you say [Johannesburg is] the future of the world? Why?
A: Well, in my opinion, you have out-of-control population growth … “we are heading for the biggest train wreck our civilization has ever come across ever. If your population curve is on an exponential growth, and the resources are on an exponential decline, what happens first is you get … rich pockets of gated communities with security guards outside them, and you get more and more poverty outside that area. … and people start having resource wars over water and food and agriculture and arable land, and then you have Joburg in 2050. …
Q.: So District 9 is a warning about a lot more than apartheid.
A.: Yeah …

A screen title at the end of the movie reveals that since the events depicted, the number of aliens (who are, by the way, bigger and hungrier than humans) has grown to 2.5 million. That’s up from 1.8 million just three years before.

Blomkamp may not have chosen those numbers randomly. At this 11.5 percent annual growth rate, the number of aliens on Earth crosses the 100,000,000,000 mark in exactly 100 years.