All Hail the Cult of Black Suffering 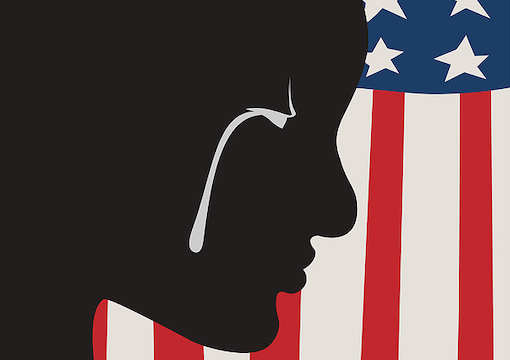 As the grotesque spectacle that is Election 2020 drags its fetid carcass down the home stretch, leaving behind a snail trail of despair and humiliation, I’m plagued by one nagging question: Is anybody buying this? Has there ever been a less honest presidential election in this nation’s history? I know that’s saying a lot, because politics is by its nature dishonest. But 2020 dishonesty is of a special vintage. The main players in this year’s election are paying tribute to an ideology we all know they don’t actually embrace.

It’s as if the entire electoral system has been taken over by a cult, one that’s made the leap from standard cult dynamics (everyone in the compound is a believer) to the dynamics that occur when a cultish clique becomes the establishment (the true believers are a small minority who enforce mass compliance via control of the state apparatus). When a cult takes over, so does its language. So does its reality. There can be debate, sure, but only within the confines of the cult’s worldview. You can say “Reverend Moon is the Messiah, and I follow him,” or you can say “Reverend Moon is the Messiah, and I reject him.” But you cannot say “Reverend Moon is not the Messiah.” That’s a denial of the cult’s reality.

This election has been commandeered by the cult of black suffering. Blacks are oppressed at every turn by “white privilege.” Blacks are being machine-gunned in the streets by Nazi cops. Blacks are being lynched on every corner by “white supremacists.” The criminal justice system must be dismantled to end black suffering. White supremacy must be denounced wherever it lurks, which is everywhere whites exist. Whites must bow, scrape, and renounce all fellow whites who don’t follow suit. And if black criminality even exists, it’s only because whites “cause” it with their racism.

Every major candidate in this year’s presidential circus has accepted those precepts as reality, even though those same candidates know the reality is false.

Look at Biden. He has a forty-year history of being a realist regarding black criminality and the need to combat it in the most unsentimental and brutal manner possible. Yet today, Biden parrots the cult’s dogma because every elected official has to. At least if they want the support of either major party and the media.

“Has there ever been a less honest presidential election in this nation’s history?”

Kamala Harris? She’s probably imprisoned more blacks than P.W. Botha. As the L.A. Times noted during the primary, Harris has “27 years as a prosecutor enforcing laws that sent African Americans to prison.” Harris put blacks away for serious crimes. She put blacks away for minor crimes. She’s laughed at how merciless she was when she imprisoned black parents for their children’s truancy.

And Trump? This is the guy who, back in 1989, wanted the Central Park thugs to “suffer and die” for their crimes. Trump’s attitude toward street criminals was unambiguous: “their civil liberties end when an attack on our safety begins.” Yet now, here’s that same Donald Trump freeing black criminals in droves while promoting a $500 billion “Platinum Plan” abscessing with criminal justice “reform,” black prison inmate “clemency and pardons,” and a promise to prosecute the real terrorists who are destroying our cities: the KKK!

The irony is that, at heart, Trump might be the least racist of the three, which is probably why he’s proven so susceptible to the cult’s poison.

Beyond irony, what makes the situation downright farcical is that you have these three panderers betraying everything they know to be true, and for what? A bloc of voters that’s not in play. Biden/Harris will win the black vote regardless. Trump will lose it regardless. So none of this is based on election strategy. The cult simply owns the system now. And if you want to live, work, and prosper within that system, you must speak the cult’s language.

If a law-and-order PAC were to run the Willie Horton ad today, it would be condemned by all candidates from both parties. Republicans and Democrats alike would denounce it as “racist” and “stigmatizing.” And all sides would join together to condemn the real danger to America: white supremacists.

Having been denounced myself, indeed, having been arguably one of the first major cases of a conservative “canceled” by former allies in a media freak show that burned bright and flamed out quickly (because the supposed “offense,” the “crime” that merited cancellation, was overblown from the start), I’m in a unique position to speak about these things. I get why Trump denounced an organization that had done him, his base, and America in general no harm. People—good people—can be pressured into denouncing a friend because they do the math in their head and decide that it’s justifiable in the long run to sacrifice one innocent person (or group) to save a cause.

When I was “canceled” in 2013, I had a good fifty or sixty friends make that exact compromise. And since then most have come to regret their actions, because they learned that you don’t compromise with the devil. Or more accurately, the devil doesn’t compromise with you. If the devil offers you a “fair deal,” the devil is lying. None of the “friends” who denounced me in 2013 reaped any of the rewards they were promised. The left cut them no slack; no brownie points were given. It was all for nothing.

Trump’s denunciation of the Proud Boys will be for nothing. If he loses in November, he’ll have thrown a bunch of good people under the bus for no reason. But even if he wins, it’ll be a hollow victory, because he’ll have won by embracing the cult’s theology, further enshrining it as the governing theology of the land. He’ll have won on the cult’s terms, having adopted its language and reality as his own.

I’ve written previously of my personal debt to the Proud Boys after they kept Ann Coulter and me (and 200 West L.A. conservatives) safe from Antifa during a 2018 event I organized. I know the Proud Boys, and I know why they’re needed. As leftist mayors and governors continue to scale back police protection, as “progressive prosecutors” keep redefining “arrestable offense” (looting? No. Rioting? No. Using a firearm in self-defense? Yes! Holding a firearm when a violent mob is on your property? Yes!), the Proud Boys are a necessary counterweight to the mobs that have been granted near-total immunity. They are our last line of defense.

Well, they were. By denouncing the Proud Boys, Trump has effectively denounced anyone who might use them in the future. Mere weeks after Trump betrayed the Proud Boys, a Denver TV news station brought an Antifa thug to a Patriot Rally to act as an official (unlicensed, illegal) “security guard.” The thug murdered a Trump supporter. The cult gets to have its armed enforcers; the rest of us get neither cops nor private security. And Trump, who could have balked, caved. From now on, anyone with any connection to the Proud Boys will be tarred as a “white supremacist,” because the media will be able to preface every story with “even Trump…”

“Even Trump admits they’re white supremacists. Even Trump denounces them.”

That’s my point about how Trump’s victory would still be a loss, because he’ll have won by playing by the cult’s rules. On the Proud Boys, on criminal justice, on black crime, on “reparations,” on the very idea that “white supremacy” is a menace on par with BLM and Antifa. Long after Trump is out of office, be it next year or in four more, the rest of us will still be living under the “reality” that Trump affirmed.

And we’ll all have to speak the cult’s language.

A perfect example of this is the current debate over school reopenings—in-person instruction vs. online. In the past month there have been dozens of op-eds and articles covering this topic, and every one of them has covered it from the perspective of black suffering.

“In-person schooling must not begin immediately! It will put black children at greater risk of COVID exposure. The push to reopen schools is coming from wealthy whites who have healthcare access that blacks don’t.”

Similarly, last week rightists celebrated the news that Trump had appointed black conservative Larry Elder (one of the people who denounced me in 2013, by the way) to the “Commission on the Social Status of Black Men and Boys.” The Commission is the ungodly creation of Marco Rubio, Frederica Wilson, Cory Booker, and Kamala Harris (among others). Its mandate is to study ways to “end the racism” that “victimizes” black men and boys. The Commission’s definition of “racism” includes three-strikes laws, bail, welfare reform, and police brutality.

Conservatives cheered the Elder appointment. “Yay! Now we’ll have one of ours on the Commission!”

This is why the right gets steamrolled: too many imbeciles who don’t realize that the problem is not that the Commission doesn’t have a “conservative appointee.” The problem is that the Commission exists in the first place. Oh great, a “conservative” will be a member. Big shit. That “conservative” will still have to operate under the cult’s terms. Larry Elder can rant and rave all he wants as a member, but he’s ranting and raving in a taxpayer-funded temple to the cult’s ideology. That the temple stands is the problem. Engaging it just gives it legitimacy. It should be knocked down.

It should never have been built.

By the way, Trump’s the one who signed it into existence. Let’s see what that buys him on Nov. 3 (spoiler: nothing).

Because while you might be on pins and needles about the election, the cult isn’t.

No need to be nervous when you win no matter the outcome.