All the News Their Bias Allows 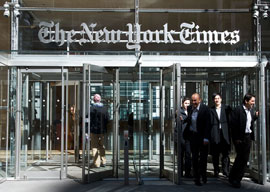 One of the great but perverse pleasures of my life when I”m in New York City is to read The New York Times. It’s perverse because no paper north of Saudi Arabia lies quite as blatantly as the Times does. Its lying is based on omission rather than invention and by the use of the kind of selectivity on news reporting that would earn a Soviet-era Pravda newshound the Stalin Prize. Excluding facts, indeed stories, which do not fall within the purview of its viewpoint is the paper’s norm rather than the exception. “All the News Our Bias Allows” should be its motto and on its masthead, but even there, the Times is spinning the facts: “All the News That’s Fit to Print” is the first big lie one encounters on page one.

If a Martian were to read the Times for the first time, he, she, or it would most likely think that America is a country with a tiny white population of tyrannical and cruel slave holders, and the rest is a large majority of blacks and Hispanics who serve under horrendous conditions imposed by their white masters.

“No paper north of Saudi Arabia lies quite as blatantly as the Times does.”

As I write this, a horrible carjacking took place in New Jersey. A white lawyer was murdered as his wife looked on when he refused to give his car keys to two black thugs. The thugs took the car for a joyride and dumped it nearby. After a large bounty was offered, four black hoodlums were arrested. During the manhunt, the Times didn”t mention that the perpetrators were black, nor that they had long rap sheets for criminal activities.

In an earlier case, the fact that a perpetrator of a foul crime against a defenseless family was a Guinean with a very long criminal record was again shielded by the Times because he was black. It was left to the tabloid New York Post to ring the bell and tell us peasants that the Guinean was a career criminal.

My favorite, however, is the book-length series the Times bored us with the week before Christmas trying hard to nip at our heartstrings with the case of a homeless 12-year-old black girl, featured prominently every day on page one, by the name of Dasani. Here’s what the Times left out while it hinted very strongly that rich America has turned its back on poor children such as Dasani. First and foremost, the girl’s parents spend $13,464 per annum given to them by a grateful nation as a cash-benefit income, with most if not all of it going for drugs”not the kind you and I buy at the pharmacist, but the type sold by dealers on street corners, mainly crack cocaine. A $49,000 inheritance in 2008 went for the same purpose. Another 15,000 smackers are given to the parents in food benefits and from private charities. Dasani’s parents have another seven children and they all lived together in order to raise the benefits, which then go for cocaine.