Andrew Yang and the Post-Nationalist Future 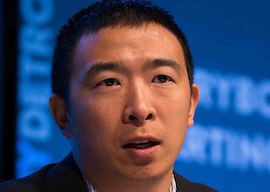 The internet underworld that famously boosted Trump in 2016 appears to be unified for the first time since. This time everyone from the meme-makers of 4chan, to the “America First” crowd, to explicit white nationalists is marching to the beat of a new, unlikely populist champion: Asian-American entrepreneur and 2020 Democratic presidential candidate Andrew Yang. What does the phenomenon of the Trump-to-Yang supporter tell us? Beyond pointing out the obvious, that NEETS and gamers really want $1,000 a month, the youthful “Yanggang” may be the harbinger of a political paradigm shift to follow the demise of Trumpism, and the closing possibility of any recognizably American nationalism.

The transfer of enthusiasm from Trump to Yang makes sense in the current political moment. It is now commonly accepted that Trump has strayed far from the path: that his appeal derived largely from talking points and promises, and that in 2019, after two underwhelming years of presidency, it is foolish to believe his “Make America Great Again” vision will ever materialize. Yang, in contrast, derives his campaign not so much from big talk as from years of researching the changing social, economic, and technological conditions of the United States, and conceiving detailed policies to match. Many of his campaign promises could be interpreted as futuristic, forward-looking—I hesitate to use the loaded term “progressive”—solutions to the same problems highlighted by Trump. Where Trump promised to restrict immigration and bring jobs back to America, Yang deemphasizes immigration and jobs altogether. He highlights instead the reality that automation is a prime culprit in American job loss and presents a plan for how the wealth generated by this massive, ongoing technological revolution could be harnessed to put $1,000 per month in the pocket of every American adult.

And maybe Yang is correct. Maybe universal basic income really is the most expedient solution to the most pressing issues facing average Americans: the sex recession, declining birth rates, the opioid crisis, college debt, rising levels of depression, alcoholism, and suicide. Most striking of all is that Yang seems to care about these exact issues, having boldly addressed all of them by name. “Deaths now outnumber births among white people in more than half the states in the country,” he tweeted on Feb. 15, “[m]uch of this is low birth rates and white men dying from substance abuse and suicide. Our life expectancy has declined for 3 years. We need to do much more.” Elsewhere, he’s tweeted about America being on track to become majority minority by 2045, and how tribalism is part of human nature. It seems that no matter what his ultimate views are, Yang is based in real statistics and driven to find real solutions. He seems, however confoundingly, to genuinely care about all factions of American society, and has no appetite for moralistic or ideological tirades against white racism. As a Democrat in 2019, this makes him a unicorn.

“The transfer of enthusiasm from Trump to Yang makes sense in the current political moment.”

Nationalism as we’ve traditionally understood it, and as Trump represented it, involves a nation or people unifying around common ideas and identity. Dropping Trump for Yang is, for many, a recognition that the formulation of such ideas and identity has become impossible in America, and that a radically new approach is necessary. Yang’s vision eschews both reactionary nationalism and revolutionary socialism, and instead promises to keep things more or less on their current trajectory but tweak the rules so that human welfare is placed first and foremost. His vision is explicitly capitalist, and strongly emphasizes individual freedom and choice. He maintains centrist positions on such issues as guns and immigration, and in recent Q&A’s has allegedly indicated that he recognizes corporate censorship as the serious problem it is. His policies reflect a distaste for both authoritarianism and bureaucracy, and I would posit that their basic flavor is populist-libertarian.

Not everyone on the right is so easily wooed, however. Some have been critical of Yang’s tone in a recent video in which the candidate, while speaking to an Asian-American audience, warns of a coming cold war between the U.S. and China, and how current conditions of demographic change and economic decline could lead to white-on-Asian hate crimes. The comments are insightful and reflect Yang’s hard-realist understanding of human nature, but they do call his motivations into question. After all, his promise of universal basic income invites us into a state of relative acceptance of the machinations of global economy and government: to no longer challenge its legitimacy, in exchange for a cut of its accumulated wealth. Is Yang just trying to make the world a safer place for the smart Asian guys like himself who are on track to inherit it? Is he, in fact, lubing the American people up for submission to the Chinese century? These possibilities are not necessarily mutually exclusive with Yang’s vision being the best option for America, or with him sincerely caring about the well-being of Americans, but they are necessary to consider.

If Yang’s vision were to be successfully implemented, rightists of the future could focus squarely on issues of freedom of speech and association, and peacefully create their own microcommunities and neo-tribes within a globalized, technologized, economic order. Is the way we’ve been thinking about nationalism an obsolete holdover from the 20th century? Should we give up on the idea of seeing our cultural identity reflected in our government? Andrew Yang’s campaign inspires these types of questions.

There’s a notion one sometimes hears on both the libertarian right and the socialist left that identity politics are always bad, even ruinous. Very often such views ignore human nature, and the inevitability of tribal conflict given certain social conditions, but Andrew Yang’s campaign has me more sympathetic to the blanket dismissal of identity politics than I have been in years. It’s not the identity part I’m ready to leave behind—it’s the politics. Such politics have produced utter gridlock in America, with an implicitly pro-white, pro-normative camp on one side, the coalition of the fringes on the other, and confusion all around about where the hell Jews are supposed to fit into it. 2020 voters would be very much ready to embrace Yang’s identity-neutral “not left, not right, forward” message. His goal seems to be to find solutions to the problems that have given identity politics such vicious fangs in the 2010s, thereby allowing individuals the space and means to make informed and rational decisions about what steps to take next. That’s something we should all be able to get behind, left, right, and center.