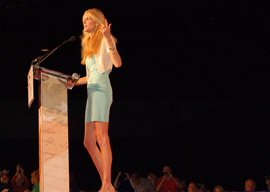 When Ann Coulter told me she was going to be debating Sally Kohn, my first reaction was “That isn”t fair.” Some friends decided we would make signs that said “Cruel and Unusual Punishment” and “Leave Sally Alone!” with pictures of a Sally sheep being fed to an Ann wolf. Then we found out the stage was going to be polluted with a superfluous moderator and two token black women. It’s a shame because I looked into it and it turns out Sally isn”t the 100% retard I thought she was. Sure, she drags out the same old liberal tropes such as “Last time I checked PC was just about treating people with respect,” but she also has substance. She’s looked into things and can actually discuss bills that have been passed and bad moves Congress has made. To see her on stage with Ann wouldn”t have been the complete annihilation I had imagined. It would be more like when Mike Tyson knocked out Trevor Berbick in the second round back in 1986. Trevor got some good punches in.

Unfortunately, women were involved and that means diversity, multiculturalism, unnecessary blackness, and a female moderator who has no idea what she’s doing. The title of the debate was “Is conservatism hostile toward women?” and instead of it being a tidy match with Sally vs. Ann, we got two black women who were clearly only there for diversity and bumbling Washington Post columnist Kathleen Parker who called herself Switzerland and moderated, cleaning her glasses, talking about herself, accusing Ann of defending the KKK, and being so incredibly biased an audience member yelled out, “What happened to Switzerland?”

The black woman on the right was Dr. Carol Swain, who is all facts and substance and zero charm. She knowingly plants bombs such as “Obama has no respect for the rule of law,” then sits back smiling when it explodes. She has the diplomacy of a skinhead. Conversely, we had Dr. Janus Adams, who was all charm and diplomacy and zero substance. Swain began the debate with a fifteen-minute diatribe about her entire life that tortured everyone expecting a debate”which was everyone. Janus (seriously, why replace a perfectly good “anice” with “anus”?) shot back with a wandering defense of her decision to send her kids to private school like anyone gave a shit.

Sally tried to step in with a few decent points. She said she doesn”t want her daughter to hear the kind of language Trump uses. “He’s not presidential,” we keep hearing. Hillary brings this up too and it’s a strange stance to take in a world where we have to hide the newspaper from our kids. Today’s New York Post is yesterday’s Playboy.

The real answer to the debate’s question is “No.” Conservatives have a disproportionate amount of respect for the idea of a housewife and a mom. They aren”t impressed by the female executive who shuns motherhood or leaves her kids at daycare all day. We don”t see the advantages of incentivizing single mothers by giving them welfare checks if they dump they baby daddy. The left claims they support feminism, but what they really support is taking away every gift and natural talent a woman has and forcing her to compete with men. In other words, feminism is about turning women into crappy men. A feminist would go up to Superman and tell him he should pursue journalism as Clark Kent. Now, us right-wingers would never deny Clark the right to work at the Daily Planet. We don”t advocate Sharia law, but we don”t see the need to tear women out of the home, deny them their superpowers, and cram them into a cubicle like it’s some kind of reward.

Ann began to tackle this subject by exclaiming, “Conservatives are the ones who see women as sentient.” Great. That’s what I”m screaming. Then she hijacked the debacle and made it about Trump. I wish she had hijacked it and made it all about the “Can women have it all?” question. It’s a debate that has tomes of data on both sides. Most recently the have-it-alls were struck with a blow when we learned just how damaging daycare is. There are some who have pulled it off, however. Former New York Times executive editor Jill Abramson and foreign-policy consultant KT McFarland come to mind.

Coulter wasn”t having it. The debate was a cacophony of caterwauling, with Janus, Parker, and Swain ranting while Kohn tried to get a word in edgewise. Ann was clearly the adult in the room, but she doesn”t really care about housewives and what women want. I don”t think she really cares about women’s issues. So she picked up the pieces and made the whole thing about the subject of her new book: Trump. Fine. At least we have some sense of direction.