Another Kind of Sanctuary 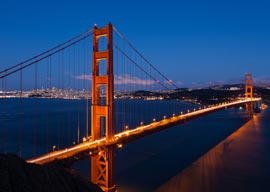 It’s a shame how tragedy ignites the public’s attention span. But “If it bleeds, it leads” works for a reason, so we might as well accept it.

The terrible and unfortunate murder of 32-year-old Californian Kate Steinle by illegal immigrant Juan Francisco Lopez-Sanchez has brought the issue of “sanctuary cities” up in the news. The death of Ms. Steinle was, if anything, an unnecessary murder. She was killed by a serial felon who had been deported from the U.S. five times.

The city where the brutal death occurred, San Francisco, has a long-standing “sanctuary” policy that limits how much city officials cooperate with federal immigration authorities. Essentially, the city acts as a shield against national deportation laws”thus the term “sanctuary city.”

San Francisco is just one of several cities in the country that don”t honor requests for deportation of alien residents by the federal government. According to the Center for Immigration Studies, at least 276 “sanctuary cities” in the U.S. have released “over 8,000 illegal immigrants with criminal records or facing charges free despite federal requests that they be turned over to Immigration and Customs Enforcement for deportation.” This occurred over a period of eight months. Many of the illegal aliens released are rearrested with new charges.

The death of Steinle has fired up conservatives looking to enforce current immigration laws on those here illegally. Republicans in Congress have proposed multiple bills to crack down on sanctuary cities. Texas senator and presidential candidate Ted Cruz argued that cities resistant to federal law exacerbate crime domestically. Even liberal pols got in on the action. Hillary Clinton and Dianne Feinstein told the press they want to crack down on sanctuary cities, denying them the right to local governance. Everybody’s favorite loudmouth maverick, Donald Trump, the only man fit to run the circus known as government, wants to shut such cities down too.

The Donald should be wary of demonizing sanctuary cities. That goes double for conservatives alarmed over how far Leviathan’s tentacles are reaching into local communities. Sanctuary cities may end up being the last refuge of anyone unwilling to submit to the new liberal order in America. Trump’s much-maligned crusade against illegal immigration is backed by a hard truth: People illegally immigrating to freer countries are, on the average, more predisposed to committing other crimes. This isn”t a racist supposition; it’s based on logic. Individuals who break some laws are more likely to break others.

Understandably, the concept of cities ignoring the rules has incensed law-and-order conservatives. But they should take a step back and think through the issue. From a limited-government standpoint, doesn”t more local autonomy make sense? Aren”t decisions made at the local level better than those at the state or federal level? By slamming sanctuary cities, conservatives are wasting a great opportunity. Wouldn”t the country be better off if San Francisco became its own communist republic and left the rest of us be? Let them have their sanctuary, and the accompanying lawlessness it engenders. It’s their problem to deal with, not America’s (or, by extension, my wallet’s).

Conservatives could even start championing their own sanctuary cities. El Rushbo has it right: If liberals are going to have cities where they flout the law, conservatives should have them too. Think of them like conclaves of what Rod Dreher calls the “Benedict Option.” If liberals can have communities that welcome illegal immigration, open drug use, and sodomy, why can”t conservatives have communities that uphold traditional marriage, ban destructive substance abuse, and maintain a faith-based culture? If ISIS can do it, so can we.