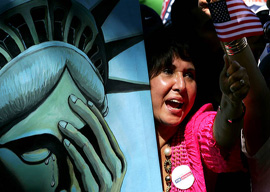 Once more unto the breach, dear friends, once more. As in days of old, business and political elites are gathering in treason to give amnesty to millions of illegal immigrants, for reasons various and malign: to keep down wages (businessmen), to enlist new voters (Democrats), and from sheer delusional stupidity (Republicans). Once again it will be up to ordinary patriotic citizens to jam the congressional switchboards, clog the mailboxes, and strike fear into the hearts of the ruling classes. SÃ­ se puede!

A handy checklist of anti-amnesty arguments appeared in the Chicago Tribune the other day. The writer declares himself a liberal, but the current amnesty proposals are too much even for him. It probably helps that he is “a former foreign service officer who has issued thousands of visas to immigrants.” Like soldiers, cops, and medical people, visa officers deal close up and personal, every working day, with the raw stuff of life. These are the people who muck out the stables for the Four Horsemen. That doesn”t commit them to any particular political or religious position, but it does cover their temperamental inclinations with a hard glaze of realism.

“Like soldiers, cops, and medical people, visa officers deal close up and personal, every working day, with the raw stuff of life.”

Well, here’s this ex-visa officer in the Tribune with a checklist of ten reasons why amnesty for illegals is a bad idea. I don”t think I”ve ever seen this done so succinctly. He manages the whole thing in less than 900 words”an average of 90 words per argument.

The Tribune piece is a very handy document for anyone planning to join the fight against amnesty, if only at the level of enlightening friends, colleagues, and family members. You could print it off, laminate it, and carry it around with you. Much less bothersome in the long run would be to memorize those points.

I say that blithely, having been blessed with the older style of English education in which you were forced to memorize reams of stuff. It started early: Aged six or seven, in fair weather we were lined up by classes in the playground of Far Cotton County Primary School and marched off to our lessons chanting the multiplication tables: “One seven is seven, two sevens are fourteen….” Modern educationists probably regard this as creativity-killing, if not actually fascist, but it’s surprising how much of it is still with you decades later. The only downside is that when, at a social event, you meet a person of the same pedagogical background, the two of you tend to fall into competitive recitation of memorized poetry while younger members of the company drift away rolling eyes and making pistol-to-head gestures.

There are tricks to aid memorization. For three or four centuries English schoolkids learned the handy mnemonic: “A black Negress was my aunt; that’s her house behind the barn.” The initial letters there key to the major battle of the Wars of the Roses: First St. Alban’s, Blore Heath, Northampton, Wakefield, Mortimer’s Cross, Second St. Alban’s, Towton, Hedgeley Moor, Hexham, Barnet, Tewkesbury, Bosworth Field. I”m guessing that particular mnemonic is not much taught nowadays.

The last of those battles shows up in another favorite school mnemonic: “Richard of York gave battle in vain.” The initials there give the colors of the light spectrum. For pupils who thought there was far too much mnemonic fixating on the Wars of the Roses, an alternative was offered: “Real old yokels gorge beef in volumes.” My American-raised kids were given nothing to help their infant faculties but the lame, meaningless “Roy G. Biv.” Ptui, I spit.

Anyway, I”ve been trying to reduce the Tribune guy’s arguments to some easily remembered form. The first step is to boil each of his ten points down to a single word. How about this?