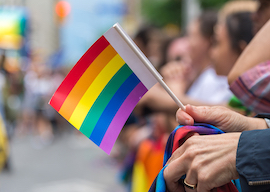 “My religion defines who I am. And I’ve been a practicing Catholic my whole life,” said Vice President Joe Biden in 2012. “I accept my church’s position on abortion as … doctrine. Life begins at conception. … I just refuse to impose that on others.”

For four decades, Biden backed the Hyde Amendment, which prohibits the use of the tax dollars of Joe’s fellow Catholics to pay for what they view as the killing of the innocent unborn.

Last week, Joe flipped. He now backs the repeal of the Hyde Amendment.

Ilyse Hogue of NARAL Pro-Choice America welcomed home the prodigal son: “We’re pleased that Joe Biden has joined the rest of the 2020 Democratic field in coalescing around the Party’s core values — support for abortion rights.”

But when did the right to an abortion — a crime in many states before 1973 — become a “core value” of the Democratic Party?

And what are these “values” of which politicians incessantly talk?

Are they immutable? Or do they change with the changing times?

Last month, Disney CEO Bob Iger said his company may cease filming in Georgia if its new anti-abortion law takes effect: “If (the bill) becomes law, I don’t see how it’s practical for us to continue to shoot there.”

The Georgia law outlaws almost all abortions, once a heartbeat is detected, some six to eight weeks into pregnancy. It reflects the Christian conservative values of millions of Georgians.

To Iger and Hollywood, however, Georgia’s law radically restricts the “reproductive rights” of women, and is a moral outrage.

What we have here is a clash of values.

“What one side believes is preserving the God-given right to life for the unborn, the other regards as an assault on the rights of women.”

What one side believes is preserving the God-given right to life for the unborn, the other regards as an assault on the rights of women.

The clash raises questions that go beyond our culture war to what America should stand for in the world.

“American interests and American values are inseparable,” Pete Buttigieg told Rachel Maddow. Secretary of State Mike Pompeo told the Claremont Institute: “We have had too little courage to confront regimes squarely opposed to our interests and our values.”

Are Pompeo and Mayor Pete talking about the same values?

In a 2011 speech to the U.N., Secretary of State Hillary Clinton said, “Gay rights are human rights,” and she approved of U.S. embassies flying the rainbow flag during Pride Month.

This year, Mike Pompeo told the U.S. embassy in Brazil not to fly the rainbow flag. He explained his concept of his moral duty to the Christian Broadcasting Network, “The task I have is informed by my understanding of my faith, my belief in Jesus Christ as the Savior.”

The Christian values Pompeo espouses on abortion and gay rights are in conflict with what progressives now call human rights.

And the world mirrors the American divide.

There are gay pride parades in Jerusalem and Tel Aviv, but none in Riyadh and Mecca. In Brunei, homosexuality can get you killed.

To many Americans, diversity — racial, ethnic, cultural, religious — is our greatest strength.

Yet Poland and Hungary are proudly ethnonationalist. South Korea and Japan fiercely resist the racial and ethnic diversity immigration would bring. Catalans and Scots in this century, like Quebecois in the last, seek to secede from nations to which they have belonged for centuries.

Are ethnonationalist nations less righteous than diverse nations likes ours? And if diversity is an American value, is it really a universal value?

Consider the treasured rights of our First Amendment — freedom of speech, religion and the press.

These nations reject an equality of all faiths, believing instead in the primacy of their own majority faith. They reject our wall of separation between religion and state. Our values and their values conflict.

What makes ours right and theirs wrong? Why should our views and values prevail in what are, after all, their countries?

Under our Constitution, many practices are protected — abortion, blasphemy, pornography, flag-burning, trashing religious beliefs — that other nations regard as symptoms of a disintegrating society.

When Hillary Clinton said half of all Trump supporters could be put into a “basket of deplorables” for being “racist, sexist, homophobic, xenophobic, Islamophobic,” she was conceding that many Trump’s supporters detest many progressive values.

True, but in the era of Trump, why should her liberal values be the values America champions abroad?

With secularism’s triumph, we Americans have no common religion, no common faith, no common font of moral truth. We disagree on what is right and wrong, moral and immoral.

Without an agreed-upon higher authority, values become matters of opinion. And ours are in conflict and irreconcilable.

Understood. But how, then, do we remain one nation and one people?