Are Democrats Ceding the Center to Trump? 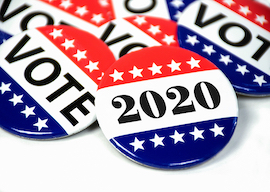 Since the Democratic debates in June, the tide seems to have receded for the party and its presidential hopefuls.

The other top-tier candidates — Sens. Bernie Sanders, Kamala Harris and Elizabeth Warren, and Mayor Pete Buttigieg — are running even with Trump, a measurable drop. A Washington Post-ABC poll just found Trump at 47% approval, a new high for his presidency.

Apparently, the more the nation sees of the alternatives to Trump the Democrats have on offer, the better The Donald looks. For Democrats, this is not good, not good at all.

For while Trump has run a daily gauntlet of dreadful media for two years, these Democrats have had only one debate and a few weeks of close coverage.

Between now and the New Hampshire primary, they will be going after one another and receiving a far more thorough vetting by a media in constant search of failings and flaws, especially of front-runners.

Traditionally, all candidates suffer attrition as the primaries come closer. For it is then that their lagging rivals become more desperate in their attacks and the media coverage becomes more intense.

Other problems have now arisen for the Democrats because of the issues that have come to the fore: race, radicalism and the border.
None looks like a winning Democratic issue in November 2020.

“If the 2020 campaign becomes a conversation about reparations for slavery and the bussing of white kids from the suburbs into inner-city schools to achieve greater integration, the Democrats will be in a world of hurt.”

The race issue surfaced in the debate when Biden was called out by Harris for his professed friendships with segregationist senators like Herman Talmadge and James O. Eastland, and for Joe’s impassioned public resistance to the court-ordered bussing of black and white children for racial balance in the public schools of the 1970s.

Harris defended bussing as a necessary remedy to segregation and added that, as a “little girl,” she had been a beneficiary.

If your friends like Eastland had their way, said Harris, I would not be here in the Senate. For days, the issue dogged Biden, who, last weekend, apologized for any “hurt” he caused.

Biden seems to have recovered most of the ground lost from Harris’ attack. But that this racially charged issue threw him on the defensive for weeks assures it will be raised again by opponents to trip up the front-runner.

Another issue certain to come up in future debates, and in the South Carolina primary where 61% of the Democratic vote is African American, is reparations for slavery.

Several candidates have already endorsed a commission to study reparations, and Biden and every other candidate will have to take a stand.

Yet, recent polls show that Americans, by 2-1, are opposed to paying reparations for a system of slavery that was abolished 150 years ago.

Bottom line: If the 2020 campaign becomes a conversation about reparations for slavery and the bussing of white kids from the suburbs into inner-city schools to achieve greater integration, the Democrats will be in a world of hurt.

On border security, indispensable to Trump in 2016, Democrats in the debates came out for ending criminal detention of people invading our country and for providing free health care for migrants who successfully break into the USA.

Detesting ICE as they do, and supporting sanctuary cities, left-wing Democrats routinely describe the Border Patrol as neo-fascists who run “concentration camps” where migrant children are forced to drink toilet water. The Democrats are becoming an open borders party.

What is their solution to the hundreds of thousands of migrants who annually arrive at our borders? Foreign aid. They want to create a Marshall Plan for Honduras, Guatemala and El Salvador so refugees will stay home rather than come to the USA for the health care Democrats will provide at taxpayer expense.

Among other ideas advocated by leading Democratic candidates:
Free college for all, cancellation of all student loan debt, Medicare for All, an end to private health insurance and the companies that provide it, the abolition of the Electoral College, expansion of the Supreme Court to 15 justices, the abolition of ICE, a phase-out all fossil fuels for a carbon neutral country, and repeal of all Trump tax cuts.

What is causing the moderate Democrats to adopt what they used to regard as radical positions? The party base, which votes in primaries and is further left than it has ever been.

Also pulling the party leftward is Alexandria Ocasio-Cortez and her sisters in Congress who receive extensive and indulgent media coverage and have a powerful following among millennials.

What the Democratic Party is risking today — and what many of its leaders recognize — is that it will be pulled so far outside the mainstream of American politics in the nomination battle, that its nominee will not be able to make it back close enough to the center to win.

If the Democratic Party, as its alternative to Trump, decides to run on this radical new agenda, America will punish that hubris with a second term for Trump.