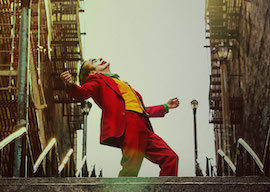 Joker is a clever and memorable (although not terribly original or enjoyable) R-rated art-house drama in the tradition of Taxi Driver and The King of Comedy masquerading as yet another comic book movie. Bizarre as it would have seemed in 1976, playing Batman’s maniacal archenemy has become for movie stars what portraying Richard III is for Shakespearean actors: the ultimate test of their villain chops. Joaquin Phoenix joins Jack Nicholson and the late Heath Ledger as impressive Jokers.

The 19th-century Romantics conceived of madness, such as in Donizetti’s opera Lucia di Lammermoor, as an excess of emotion and personality. Actor Dustin Hoffman, who’d once had a day job as an attendant at the New York state mental hospital, introduced in The Graduate and Rain Man a new alternative: the mentally challenged as depressed, obsessive-compulsive, and on the spectrum.

Phoenix’s performance is a throwback to the old operatic style, with no attempt to conform to current DSM-5 categories. This is reasonably in sync with the roots of the character: The 1930s comic book authors had modeled their grinning Joker on the makeup worn by Conrad Veidt in the 1928 Expressionist Weimar-American silent film The Man Who Laughs. In turn, that was based on Victor Hugo’s 1869 Romantic novel. Hugo’s main character is secretly an aristocrat’s son sold to child abusers who twisted his face into a permanent smile to display him in a freak show. Faint echoes of this show up in Joker.

Phoenix, who played the Emperor Commodus in Gladiator and Johnny Cash in Walk the Line, is a stupendous actor. On the other hand, he is in every single scene (to keep uncertain what is happening in reality versus just inside his head) of this slow-paced two-hour film, which is a little too much of a good thing.

By the end, Phoenix starts tossing in effeminate gay mannerisms, presumably out of boredom, much as the eccentric star once sidelined his career to troll the public with the performance-art prank of giving up acting for rapping.

Why do comic book movies dominate the box office? (Joker opened with an October record $96 million, which is a huge number for a mid-budget movie with few special effects.)

With the shift in pop cultural hegemony from Old Americans to Ellis Island Americans, movies based on comic book superheroes, most of whom were dreamed up by American Jews from the 1930s into the 1960s, now fill the role once played by Westerns as Hollywood’s bread-and-butter genre. Writer-director Todd Phillips, who previously made comedies of masculine excess such as The Hangover and War Dogs, dreamed up a story that ingeniously merges the DC Universe, the Scorsese-verse, and the Trumpian present.

“Writer-director Todd Phillips dreamed up a story that ingeniously merges the DC Universe, the Scorsese-verse, and the Trumpian present.”

Of course, owing to the boyish preposterousness of the source material, it’s harder to make a really good movie out of a comic book than out of a cowboy tale. Phillips tries by eliminating all the superpowers. In this origin story, Phoenix’s Arthur Fleck isn’t a criminal mastermind; he’s a low-IQ delusional loser like the Robert De Niro characters Travis Bickle (who was partly based on the guy who shot governor George Wallace in 1972) and Rupert Pupkin.

Joker is set in 1981 (judging by Brian De Palma’s Blow Out playing in a movie theater), the year that Taxi Driver addict John Hinckley Jr. tried to impress Jodie Foster the way Bickle had tried to woo Cybill Shepherd: via political assassination. Of course, that Ronald Reagan had been a movie star himself made this whole history even more surreal-sounding.

As usually happens to the Joker in the comic books, Hinckley was found not guilty by reason of insanity. This led to an uproar among the citizenry and some tightening of the laws, an early milestone in the arduous retaking of the streets, most notably in New York (the real-life Gotham City), where liberal governance had unleashed crime in the later 1960s.

In response to the Bickle-Hinckley controversy, Scorsese made The King of Comedy in 1983 to mock talentless nobodies who take showbiz too seriously.

In Joker, Arthur has recently been released from Arkham Asylum. But Reagan-era budget cuts are slashing social services for the deinstitutionalized. Gotham City (i.e., New York) is also suffering a garbage strike, and street crime is pervasive.

Arthur’s one hope is to become a comedian and do his jokes on the Murray Franklin late-night show. (“But to be a comedian, don’t you have to be funny?” asks his mother.) In Joker, De Niro moves over to Jerry Lewis’ role as the talk-show host whom the unfunny aspiring comedian wants to impress.

Meanwhile, Arthur is working for a rent-a-clown agency as a Human Sign when a gang of Puerto Rican-looking adolescents steal his sign, then beat him up when he chases them into an alley. His boss docks his pay for the cost of the sign.

For self-protection, Arthur starts carrying a gun. When bullied one night on the subway for wearing his clown makeup by three drunken white yuppies, junior executives of Wayne Enterprises, he goes all Bernie Goetz on them. The killings inspire a leftist populist Eat the Rich wave of enthusiasm for the mysterious killer.

Billionaire mayoral candidate Thomas Wayne, father of 9-year-old Bruce, denounces the anti-law-and-order crowd as “clowns.” (Alec Baldwin, who plays Donald Trump on Saturday Night Live, was originally supposed to play the elder Wayne but had to drop out. An actor who looks like Baldwin replaced him to keep up the Trump implications.)

In response, the rabble of punks on the streets, seemingly recruited from Walter Hill’s 1979 movie The Warriors, takes to rioting in clown masks.

I imagine that’s a riff on both Antifa and the Pussy Hat protests. The screenwriters, Phillips and Scott Silver, worked hard, so there are numerous references for viewers to untangle to both current and four-decade-old events.

Left unresolved is whether the pathetic Arthur somehow evolves into the master criminal of the comic books. Or perhaps Arthur is a malign version of Peter Sellers’ simpleminded cipher Chauncey Gardiner from the 1979 film Being There?

Like Westerns, movies about crime-fighting superheroes tend to be inherently right-wing. Granted, Superman was usually associated with FDR’s cheerful liberalism, but Batman was always a reactionary proponent of order. Thus, the conservative director Christopher Nolan made a formidable Batman trilogy in 2005–2012.

Way back then before the Great Awokening, critics simply assumed that anybody as talented as Nolan must of course be liberal, so they didn’t give The Dark Knight a very hard time. But these days, reviewers worry that gifted white men like Phoenix and Phillips, no matter how generous their leftist campaign contributions, must actually be Secret Nazis. If they weren’t racists, why would they humiliate Women of Color by making a good movie?

Thus, Joker has gotten berserk negative reviews, noteworthy for their incoherence and anger at the film’s evenhanded politics. The New York Times film critic, for example, lamely argued that the film is “not interesting enough to argue about,” even though Joker is more fun to debate than to sit through.

The New Yorker, in contrast, was enraged by the lack of racial animus in Joker: By portraying individuals of different races as a mix of good and bad, Joker undermines The Narrative that whiteness is the root of all evil.

Phillips was born in Brooklyn in the early 1970s, but then his family white-flighted out to Long Island. My guess is that Phillips is an old-fashioned Jewish liberal being driven to the center by the ongoing revolt of the humorless who feel themselves oppressed by the existence of men with a sense of humor.