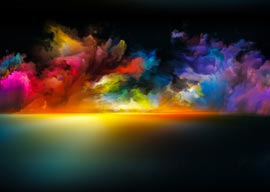 Generally I don”t remember my dreams, and to judge by the few that I do remember I am rather glad that I don”t. Nor do I believe, pace Freud, that they are the royal road to the unconscious, still less that they are auguries of the future. On the contrary, I think that they are the effect on the brain of the digestive products of heavy meals taken too late at night. However, I have to admit that this opinion may be the consequence of selection bias: the few dreams that I remember tend to be those that follow such heavy meals. Physiologists tell us that we all dream every night, and so these dreams may not be representative of all my dreams.

In general, the dreams that I remember are unpleasant without giving quite the full horror-film nightmare treatment. For example, the other night I dreamt that I was at Baker Street Underground Station in London. Why I was there my dream did not vouchsafe me: someone to whom I told it afterward pointed out that I had been wearing my deerstalker hat that weekend, and of course Sherlock Holmes lived at number 221B Baker Street.

Furthermore, I was accosted (in my dream) by a tall upper-class man of Sherlockian bodily habitus who, however, was drunk, which as far as I am aware Holmes never was in all the canon of his exploits. And for some reason this pseudo-Holmes insisted on speaking to me, putting his face right up to mine and talking the most terrible incoherent drunken nonsense. (I could smell his stale alcohol breath in my dream.) By his insistence he prevented a friend of mine, who edits a magazine for which I write on occasion and who had come to Baker Street to meet me, from speaking to me. He, my friend, wanted to explain Gaullist economics to me, in which the figure of 5 per cent was very important, though 5 per cent of what the dream also did not vouchsafe me. The budget deficit? The interest or unemployment rate? I cannot say; but in any case my friend had very little chance to explain himself because of the almost jealous ravings of the drunken man, who refused all my hints that I wanted him to go away.

“You know immediately when you have said something ridiculous: your words extinguish themselves as you utter them, as if spoken through cotton wool.”

I was polite even in my dream: or was it pusillanimous? I didn”t so much as raise my voice to him. Even asleep I wondered whether this was pusillanimity rather than politeness. I don”t in the least mind upsetting people by what I write, but when confronted by someone in person, even someone whom I dislike, with whom I disagree profoundly and to whose views I have a profound aversion, I suddenly become anodyne and emollient. I can pour scorn on any number of writers, but not upon a single individual in person. In a way this is not surprising: I have never had any problem with public speaking. It is speaking in private that I find difficult.

Suddenly the Baker Street drunk vomited copiously and I just managed to avoid the stream. Abandoning my friend without a moment’s thought for his situation, I ran down the stairs and caught the first train I encountered, without the least thought of where it was going. And then I woke.

By an association of ideas, I began at once to think of Nottingham. I had had something like a nightmare and Nottingham is also something like a nightmare, one of the many dreadful provincial cities of England. I once stayed there for a couple of weeks in a dismal house. Admittedly I found a good and very cheap Jamaican restaurant nearby; the buses were excellent, and there was a nice Victorian cemetery with a charming caretaker. When I asked him whether he liked working there he said that he did because the residents were so well-behaved.

But otherwise it (the city) was horrible. Thanks to modern architects and town planners it is the visual equivalent of white noise, with buildings of such monstrous ugliness that they are a form of visual torture. Of course corrupt and stupid councillors are to blame for this, but it is too late now for recrimination: the city is dreadful beyond all possibility of redemption.

I was standing at a bus stop one day during my brief sojourn there when three pupils (or students, as they would now no doubt be called), just out of school, approached. They were throwing their disgusting fast food at each other and some of it landed at my feet. I asked the fattish boy who had thrown it to pick it up, politely and without anger, but he turned on me at once and said, “Have you f….ng lost the plot or something? F…..g pick it up yourself.”

In a just world I would have grabbed him by the collar, forced him to the ground, and made him lick it up, but if I had done that I should probably still be in prison. Instead, I said (my pusillanimity being the association of Nottingham with my dream), “What would your mother say if she heard you?”

Probably “Well done.” The chances were good that she was a slut or a slattern with three children by nineteen different men, the state now being father, financially speaking, to the child. So my words were about as effective as a NATO bombing campaign. You know immediately when you have said something ridiculous: your words extinguish themselves as you utter them, as if spoken through cotton wool.

But the stillborn words took me back in my mind a few years. My brother’s father-in-law, the mildest-mannered of men, owned some flats, and one of his tenants hadn”t paid his rent for months. My brother’s father-in-law, who wanted to pay him a visit, thought that I might be an aid to extracting it from him, two mild-mannered people being more formidable, in his opinion, than one.