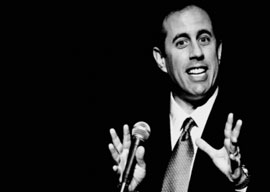 Call me a cockeyed optimist, but I took heart from the micro-fuss over Jerry Seinfeld’s push-back against PC bullying the other day. In case you missed it, Seinfeld was being interviewed on TV about his recent comedy series. “I have noticed that most of the guests [i.e., on Seinfeld’s series] are mostly white males,” murmured the hipster interviewer, deftly unsheathing his stiletto.

Seinfeld kicked it out of his hand. Pointing out at the studio audience, he scoffed: “Take a look over here, Peter. Whaddya see? A lotta Whitey!” The hipster guy didn’t know whether to sneeze or wind his watch.

It wasn’t precisely my dream scenario, which is of some white celebrity being asked, “Are you racist?” and replying: “Yes. What’s it to ya?” As a break from the bland orthodoxy of talk TV, though, it sure was refreshing and heartening. Incidents such as this are steps, if only baby steps, away from the silly counterfactual cant that we call political correctness (PC) and toward realism about human nature.

“With the swelling flow of news from the sciences and rising cynicism among the young, the citadel of PC may yet crumble and be washed away.”

I think”I hope“I detected an undercurrent of cynicism in Seinfeld’s responses. Cynicism is the lethal enemy of ideology. Eugene Girin told me once that by the time the USSR began to fall apart in the 1980s, you couldn’t find any citizen who was not a cynic. Even if I’m wrong about Seinfeld, his remarks were of a kind to put cynically un-PC thoughts into young viewers’ heads”God’s work, as far as I’m concerned.

There is particular encouragement in Seinfeld’s being Jewish. Any time I talk about the prospect of our elites turning race realist, someone responds with: “That’s all well and good, but you’ll never get the Jews onboard.”

I acknowledge the problem. Steve Sailer describes political correctness as “a war on noticing””on noticing human group differences, that is. This has fit neatly with Jewish obsessions. The last few generations of Jews in the West have seen it as a key ethnic interest not to be noticed. In the debates that followed the publication of The Bell Curve twenty years ago, Jewish lit-crit panjandrum Leon Wieseltier declared himself “repelled” by the book’s recording the fact of high mean Ashkenazi intelligence”a fact that is as plain as a sunrise and obvious to everyone. Eek! Somebody noticed!

Jews have thus been prominent in enforcing PC orthodoxy on the straightforward calculation that if noticing is outlawed, Jews won’t be noticed. This is why the sacred texts of PC have Jewish authors, and heretic-hunters and their organizations are disproportionately Jewish.

This might change, though, as the causes of Jewish insecurity fade. The real horrors of modern Christian anti-Semitism are receding into the past. No Jew now alive can remember the Kishinev pogrom; the youngest Holocaust survivors are in their seventies. It is hard to believe any American Jew today feels threatened by his Gentile neighbors, and as the stimulus dies, so does the response. European Jews are another matter: but the threat there is from immigrant Muslims, while political correctness is oriented toward tolerance for Islam, so the natural vector of the Jewish response is anti-PC.

I thus have some hopes for the new generation of Jews. For years I have been patiently explaining to race-realist friends who grumble about Jewish enforcers of orthodoxy that no social movement in the West will get anywhere unless it can recruit some smart Jews. Jews are the word people par excellence. To publicize, convert, propagandize, and litigate, you need Jews.