Ballad of a Marked Man 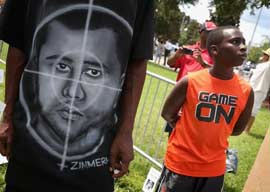 George Zimmerman is now a free man. He is free to be stalked, threatened, harassed, persecuted, and possibly killed at the hands of the perpetual malcontents who are sorely displeased with his acquittal late Saturday night.

But he is not free to sleep soundly”not now, nor possibly for the rest of his life. Like O. J. Simpson after his murder acquittal, he is likely to face big-money civil suits from Trayvon Martin’s family members. And like the LAPD officers who were originally acquitted on charges of using excessive force against Rodney King, he is now vulnerable to a federal civil-rights prosecution. In fact, the Justice Department is investigating precisely that possibility, despite the fact that an FBI investigation found no evidence that Zimmerman is “racist,” as if such a thing can actually be proved.

As of late Sunday night, the oft-threatened post-acquittal riots have yet to manifest themselves, save for a predictable spate of window-smashing, trashcan-tossing, spray-painted death threats, and flag-burning in Oakland, a town which should really just burn itself to the ground and get it over with. But the week is still young…and it is the middle of summer, after all. (Update: Violence has been reported between protesters and police in”where else?”Los Angeles.)

“These people will not let go of the script that’s been welded into their stupid minds.”

Zimmerman is “going to be looking around his shoulder for the rest of his life,” his brother Robert told butt-sniffing noodlehead Piers Morgan on CNN shortly after the verdict was announced. “I don’t know if he’ll carry a gun now, but I would think he has more reasons to than before….They express they’re trying to kill him, all the time, every day, on my Twitter feed, on the Internet.”

“He has to be very cautious and protective of his safety because there is still a fringe element who have said, at least in tweets and everything else, that they want revenge,” said Zimmerman’s defense attorney Mark O’Mara.

The threats are not only being aimed at Zimmerman. The six jury members“all of whom were female and five of whom were white”are also being targeted. So are “crackers” in general. Mexicans, too.

Obviously, the most important thing we can learn from the verdict is how celebrities feel about it. Miley Cyrus is not happy. Neither is Katy Perry. Nor are many other musicians.

Pro athletes also feel compelled to vent their spleens about this grievous miscarriage of justice. New York Giants wide receiver Victor Cruz tweeted that “Zimmerman doesn’t last a year before the hood catches up to him.” Atlanta Falcons wide receiver Roddy White (he’s black) said that all six jurors should kill themselves.

I believe it was MLK who said something along the lines of “a perceived injustice anywhere leads to nauseatingly misguided sanctimony everywhere.” The flaming quills of the progressive press corps”you know, the ones who initially whipped this everyday killing into a national moral outrage and potential race war”were frantically scribbling about this wretched injustice shortly after the verdict.