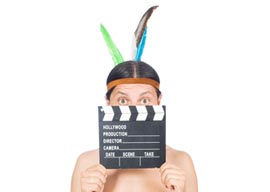 We all know how virulent political correctness has become. In fact, to cite another tedious clichÃ©, it’s been “going mad” (exclamation point optional unless you”re a Daily Mail commenter) since, by my count, around 1993.

)  “ or all three (Tropic Thunder) “ movies have been released in the 40+ years since Blazing Saddles broke box office records.

From the sounds of it, Adam Sandler is trying to “make Blazing Saddles today.” The Ridiculous Six is described as “a broad satire of Western movies and the stereotypes they popularized.”

How “broad” are we talking, Kimosabe? Well, here are a few admittedly tiny snippets of the Sandler screenplay:

A Native woman named “Sits-on-Face” “squats down behind the teepee and pees, while smoking a peace pipe.”

“Do I dare detect the slenderest streak of resistance to the “identity politics” tantrum-throwing that’s been such a successful leftwing tactic, especially in show biz, for so long?”

Then a white male character says to her, “Say honey: how “bout after this, we go someplace and I put my peepee in your teepee?”

Another Native woman character is named “Beaver’s Breath,” and reportedly, that was the last blade of sweetgrass as far as the film’s extras were concerned.

A dozen of them walked off the set a few days ago, the movie’s “cultural consultant” leading the way, a tiny Trail of Tears.

Hey, one of the extras was crying, ok? At least, that’s what she told a reporter, adding:

“When I began doing this film, I had an uneasy feeling inside of me and I felt so conflicted. I talked to a former instructor at Dartmouth and he told me to take this as finally experiencing stereotyping first hand. We talked to the producers about our concerns. They just told us, ‘If you guys are so sensitive, you should leave.’”

Another extra complained, “Nothing has changed. We are still just Hollywood Indians.”

(Actually, no. “Hollywood Indians“ were mostly played by Italians and Jews “ and Italians by Jews, until the Godfather, but we”ll get to that in a moment…)

Weirdly, “walking out in a huff” was some kind of show biz “thing” last week.

Robert Downey, Jr. split an interview after he was questioned about “his drug addiction and time in jail, as well as his political views.”

Then a bunch of black actors ran away from a stage production called “Ferguson,” after they realized it wasn”t a passion play with Michael Brown standing in (without his hands up, though) for Jesus.

Had any of these geniuses thought to Google the playwright’s name, they”d have discovered within seconds that Phelim McAleer is the savvy rightwing provocateur behind prog-poking documentaries like FrackNation.

And his Ferguson “script” is made up almost entirely of verbatim transcripts from grand jury testimony in which witness after pro-Brown witness was discredited.

“The Ferguson cast are walking out because I wouldn’t change the script to attack the police and because of my “conservative” politics.”

Which reminds me: both Adam Sandler and Robert Downey, Jr. always make it onto those lists of “Hollywood conservatives” “ which now have to be updated to include Bruce Jenner, who came out as a Republican during his big sit-down with Diane Sawyer. (She didn”t walk out at that point, but looked like she wanted to…)

Anyhow, regarding the “don”t let the wigwam flap hit you on the way out” attitude displayed by Sandler’s people and then McAleer:

Do I dare detect the slenderest streak of resistance to the “identity politics” tantrum-throwing that’s been such a successful leftwing tactic, especially in show biz, for so long?