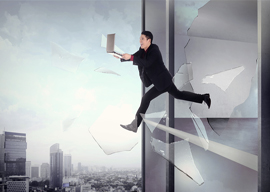 Poor Bill O”Reilly…taken down by a combination of corporate cowardice, female coworkers, and his own boorishness. It’s an ignominious end to the career of a highly successful opinion warrior. Like Stonewall Jackson being ventilated by his own boys, O”Reilly wasn”t Derbyshire”d for his opinions, but Cosby”d for his conduct. The day Bill got canned, I posted on social media that the curmudgeonly wordsmith would still be on TV had he taken to heart one final “word of the day”: In all matters involving high-profile men and their female colleagues, it pays to be “Pencive” [adj. Pence-ive]. Earlier this month, people laughed at Mike Pence when it was revealed (or rather recalled) that he refuses to be in the company of women if his wife is not present. “American Taliban!” the lefties yelled. But in fact Pence’s method is far from madness; it’s the smart thing to do. Because these days, any dude with something to lose (especially dudes who are right-of-center) who finds himself in a “he said/she said” dispute regarding “sexual harassment” charges will quickly learn that “she said” is the paper to the “he said” rock.

In the current year, it’s the men who need the chaperones.

To be clear, I”m not saying that all or even most of O”Reilly’s accusers (and settlement recipients) were lying or undeserving of compensation. But the one who was jitterbugging through the media circuit last week, Perquita Burgess, is more full of crap than my uncle’s colostomy bag. Perquita, who is black (I feel the need to point that out because her name gives absolutely no indication of her race), claims that O”Reilly “grunted” at her and called her “hot chocolate” while simultaneously “leering” at her and “not looking” at her, an impressive feat for anyone who’s not Orthrus. She also claimed that she “felt” that O”Reilly was looking at her cleavage, so apparently she’s an empath, or O”Reilly has heat vision, or maybe both. Here we have O”Reilly leering at someone while not looking at them, and being accused of staring at cleavage not because it was witnessed but because it was “felt.” I”m surprised O”Reilly wasn”t also accused of cursing the harvest and mesmerizing the milliner’s wife.

Appearing on the daytime TV henhouse The View, Perquita’s attorney Lisa Bloom brazenly admitted that her client’s claims were part of a “legal strategy to bring [O”Reilly] down.”

“In the current year, it’s the men who need the chaperones.”

Again, I”m not claiming that O”Reilly never came on to some of his female colleagues. His loutishness was well-known to those of us who hovered around establishment GOP circles during the Obama years. But the tales told by “Perquita mÃ¡s” are obviously part of a targeted hit, the figurative assassination of a conservative baddie.

Leftists are, of course, and as always, obsessed with eradicating all opposing points of view. The problem is, a sizable number of Americans remain uncomfortable with the idea of censoring or punishing people for expressing their opinions. And, it should be added, a pretty decent number of Americans continue to identify as conservative. So leftists have had only limited success in torpedoing conservative public figures by attacking their views. Michael Calderone in the Huffington Post damn near admitted as much when he pointed out that attempts to force Glenn Beck off the air at FNC, when the complaint was “we don”t like his opinions,” failed, whereas the campaign against O”Reilly was destined to be far more successful, because it was not centered around views, but conduct.

This is similar to the manner in which poor Milo Yiannopoulos (remember him?) was extirpated. What finally got him wasn”t his views on multiculturalism or Islam or feminism”his publisher totally stood by him against all leftist opposition on those issues (because a publisher of political tomes would look a right fool for canceling a book because the controversial political ideologue they signed turned out to be a controversial political ideologue). Milo was taken out by his remarks about statutory rape. Now his publisher could plead that it wasn”t about politics, but advocacy of unseemly sexual conduct. “We loved Milo the impish right-winger, but Milo the sleazeball sex fiend? Blech!“ Milo was sent to the cornfield, and those behind the banning (and those who cheered it) could sleep well, because whereas penalizing dissenting political views is illiberal and fascistic, penalizing sexual misconduct is civilized and reasonable.

This is the way of the future. The best method by which to take out rightists is the Anita Hill approach. Don”t go after ideology; go after swinishness. The Anita Hill battle plan failed 26 years ago, but think for a moment about what might have happened had it succeeded. Had H.W. Bush decided to withdraw Clarence Thomas” nomination, we may very well have gotten a second David Souter, and every significant victory common sense has gained in the Supreme Court since 1991 would not have occurred. Leftists may have lost the Battle of Anita Hill, but they”ve never abandoned the strategy.

Unable to win on policy, leftists seek to win on propriety. And when conservatives lose on those grounds, I hate to say it, but it’s a fair cop in many cases. The right’s self-righteous moralists always leave themselves wide open to well-deserved censure when they don”t live up to the good Christian standards they publicly espouse. And I never mind seeing a conservative moralizer brought down by his own hypocrisy (Foley, Hastert, Craig, etc.). I only wish that the media could muster the same level of outrage for leftist hypocrites in politics and the media”i.e., the self-proclaimed socialists and Marxists who own five mansions, six yachts, and a dozen tax shelters. But no, those folks receive only adoration, never condemnation.

Think about this for a moment…Bill O”Reilly was taken down for allegedly being rude to women, while Al Sharpton, who on more than one occasion has outright called for violent pogroms against Jews, stays on the air. The shift from attacking ideology to attacking propriety benefits leftists in several ways. It allows them to avoid looking like hypocrites for continuing to support vile ideologues like Sharpton, but also, let’s be frank, leftists are more likely than rightists to get away with unsavory sexual indiscretions. Take Bill Clinton. He survived his sex scandal with precious little damage; Newt Gingrich did not. Because when your platform is all about an aborted fetus in every Dumpster, a tranny in every bathroom, and a glory hole in every stall, who’s going to bat an eye if you uninvitedly squeeze a boob or get a BJ from a subordinate every now and then? This is why leftist darling comedian Louis C.K. consistently skates past whispers of sexual harassment and lewd conduct. When your routine consists of making jokes about pedophilia and how your own young daughters are “cunts,” who’s going to act shocked if you”re accused of dangling your dirlywanger in the presence of a female colleague? “Oh, that Louis, such a free-spirited scamp. Nothing’s sacred to him!”