Bean and Gone in L.A. 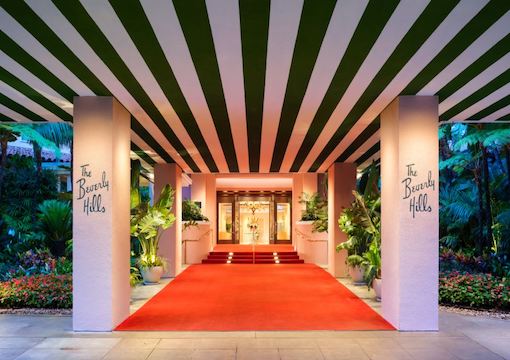 A conservative author remarked to me a few days ago, “Between Kanye and the Jews, and the City Council Mexicans and the blacks, it’s been the Cole Cinematic Universe this week.”

Indeed, many familiar notes; this’ll be a two-parter.

The L.A. City Council (LACC) Mexicans story has been everywhere, and of course, rightists have gotten it wrong.

Because rightists love their myths and clichés.

For example, prominent rightists can’t stop misrepresenting Beverly Hills as a deep-blue “progressive” enclave filled with white elitist leftists who fund wokeness while living isolated from its effects, even though that’s not at all the case: Our major residential precincts went for Trump in 2016 and 2020, and against Soros DA Gascon. These are simple facts, ignored by empty suits like Dave Rubin, who recently tweeted, “If sending illegals to Martha’s Vineyard is cruel, then sending them to Beverly Hills and the Hamptons would truly be evil. Please don’t get any ideas like that @GovRonDeSantis!”

I emailed Rubin (a New Yorker), asking if he knew that Beverly Hills is red, and, if so, why he thinks we’d be a good target to flood with illegals.

Of course, he never replied. Neither did Federalist tard Tristan Justice, who penned a column suggesting Beverly Hills as the next place for DeSantis to send illegals (the piece included a photo of the Beverly Hills Hotel, which ironically lies right in the heart of the deepest red precinct). Again, I contacted the guy; again, no reply.

Am I being petty? Does any of this matter? Indeed it does. In May/June 2020, why did BLM leaders target Beverly Hills and not, say, Malibu, an actual “deep-blue ‘progressive’ enclave filled with white elitist leftists who fund wokeness while living isolated from its effects”? Here’s why: BLM leaders are smarter than the likes of Rubin and Justice. And that ain’t sayin’ much. If some fat ghetto mamma named Chantiquilla is your intellectual superior, you’re really, really stupid. BLM leaders at least possess street smarts; they know where the money is and where their allies are, and they don’t sack those areas (BLM L.A. leader Melina Abdullah straight-out told the L.A. Times that Beverly Hills was chosen as the location of the riot specifically to punish its residents).

Dumbasses like Rubin would attack allies, because they’re too stupid to learn who their allies are.

Rightists who can’t be trusted on matters that are objectively provable (like Beverly Hills precinct results) certainly can’t be trusted on matters that involve interpretation. Which brings us to the LACC Mexis. A month ago I wrote about the growing fad of prominent rightists (like Tucker Carlson and Steve Bannon) lionizing Hispanics as the future of conservatism, based on nothing more than a few poll results and the incredibly low bar set by blacks when it comes to unthinking partisan slavishness.

Mexicans aren’t “anti-woke.” They just don’t like blacks. When you hear someone championing Mexicans or any Third World immigrants in impossibly grandiose terms, it’s always nonsense. Don’t romanticize it as so many conservatives do. Weak thinkers always have to sentimentalize everything: “Hispanics are natural Republicans! They’re one of us!”

I might as well have been talking to a tree. Four days after my column, there was Greg Gutfeld (with Dave Rubin by his side) proclaiming, “I don’t think I’ve ever met a woke Mexican.”

News flash, Greg: Elizabeth Guzman, Peruvian immigrant and Virginia legislator, is leading the charge to criminalize parents who fail to “affirm” their children’s gender fantasies. And Central American migrants are literally chanting, “We are trannies,” as they march to the border. As a Harvard migration researcher reported last year, Central American caravaners have been chanting, “¡Esas que caminan, son las travestis, transexuales de América Latina!” (“Those that walk are the transsexuals of Latin America!”).

BTW, declaring yourself a tranny is a sure way to receive amnesty at the border, so perhaps the chanting trannies are lying to get in. Which would be worse than if they were actual trannies, because it would demonstrate that even before setting foot in this country they’ve learned how to master identity politics for personal gain.

I think that certainly qualifies as “impossibly grandiose terms.” How long before MAGAs declare that not building the wall was Trump’s most impeccably played 4-D chess move, as it goaded the Dems into opening the border even wider…thus letting in the Hispanics who saved America!

Don’t laugh, if Trump runs in 2024, someone will make that claim (my money’s on Bannon; his swindling of the “build the wall” funds will be portrayed as part of the plan!).

Last week, in the middle of all this Hispanic-worship, came the LACC scandal, in which (now former) Council President Nury Martinez and members Gil Cedillo and Kevin de León (all Democrats) were caught on tape attacking “the blacks,” attacking “Jews,” “white liberals,” and “the L.A. Times” for supporting “the blacks,” and attacking a white council member for exploiting his black son like a designer handbag (Martinez referred to the boy as a “little monkey”).

One might say this incident is a picture-perfect illustration of my statement “Mexicans aren’t ‘anti-woke.’ They just don’t like blacks.”

But what do I know? I just live here.

So how did conservative pundits interpret the LACC incident? The only way they know how: by ignoring specifics and context, and rolling out the grandiose clichés.

“Democrats are the real racists!” That’s what every rightist blue-check on Twitter went with. Or, as stated in greater detail by RedState’s Jennifer O’Connell (who’s black), “underneath the surface” of the “progressive patina” of “defund the police leftists” like Martinez lies “racism” and “hypocrisy.”

“California Democrat and Council President Nury Martinez called a black child a ‘monkey’—once again the Democrats are proven to be the real racists after all,” bellowed Fox’s Steve Hilton.

A Hispanic answers one poll question to your liking? Hispanics are going to save America! A Hispanic calls a black person a monkey? It’s the Democrats! Blame the Democrats! That’s the problem with clichés: One-size-fits-all answers aren’t conducive to tackling complex questions.

If you’re willing to cast aside the clichés, the LACC recording (which I encourage you to listen to in full) is easy to unpack. Martinez, Cedillo, and de León are not radicals. They represent what passes for moderate in this city. Career politicians, in it for themselves and the graft. They’re tight with big labor, and they adhere to all the basic Dem positions on guns, immigration, abortion, etc. But they’re not the Democratic Socialists of America. Indeed, Cedillo is running out his final months because he was defeated by a DSA “police abolitionist” in the June primary.

Martinez was not a “defund” extremist. Like every politician in L.A., she pandered to blacks on defunding in June 2020 so that they’d stop burning shit down (and so they wouldn’t target her residence). As soon as BLM lost steam, Martinez stopped pushing for defunding, and the token defunding that our mayor and council trumpeted in June was quietly restored.

Basically, this is three beans bitching about how blacks and their supporters make life difficult for them (hence Martinez’s complaint that District Attorney Gascon is “with the blacks;” without blacks and the Jews/whites/journalists who coddle them, we’d still have our former, perfectly acceptable DA). These council members have no desire to bring about dystopia; they just want to be comfortable, accrue power, make money, and pander to constituents by regurgitating shopworn Democrat talking points. Boat-rocking civilization-upending radicalism like “police abolition” is abhorrent to them, because between the extremists demanding it and the law-abiding constituents affected by it, it puts unwanted attention and pressure on a council that grafts best off the radar.

If L.A. County were only white, Hispanic, Asian, and Middle Eastern/Persian/Armenian, it would be smooth sailing. But blacks don’t allow smooth sailing. They’re perpetually aggrieved, perpetually protesting, perpetually in need of rescue, perpetually committing crimes, perpetually unsatisfied; and when they scream, demand, and threaten, it makes an otherwise easy life difficult indeed for local politicians in noncompetitive one-party districts who just want to sit back and get rich with a minimum of effort.

Several months ago I commented on a podcast that even though my high school was 80 percent black, it might as well have been 100 percent because once you get to 80 percent, black is all you see and hear. The “LACC Three” made that same point, and in a city that’s only 7.8 percent black: “Twenty-five blacks shout like they’re 250, when there’s 100 of us [Hispanics],” de León remarked, calling it the “Wizard of Oz effect,” where you think you’re facing something of massive size but when you look behind the curtain it’s just “the little Wizard of Oz.”

The LACC Three see blacks as not just trouble, but trouble that’s only trouble because it’s artificially inflated by “the Wizard” (liberal whites, Jews, journalists, and black decibel-level). They’re especially upset that black power in majority Latino districts is being kept on life support by these “wizards.”

This affair isn’t about “racist Democrats”; that’s way too simplistic. It’s about how white Democrat politicians, fully grasping (even if they won’t publicly admit it) their rapid immigration-driven demographic decline, need blacks. They need the votes, they need the “enthusiasm.” Hispanics don’t. Their numbers are on the rise, and they see blacks as nothing but an obstacle. Every LACC Hispanic knows they’ll do just fine, better even, once blacks have finally dwindled to insignificance. An L.A. that’s white/Jew/Asian/Persian on the Westside and Hispanic everywhere else will be a dream for do-nothing politicians (and frankly, it’ll be fine for average Angelenos, too; it’s the best we can realistically hope for). Political beefs will be minor, there’ll be crime but cops will be allowed to make arrests, and the lucrative relationship between council members and big labor, developers, and lobbyists can proceed unimpeded.

Blacks are an impediment to that bright future. And the irony for the LACC Three is that the “Wizard of Oz effect” is exactly what brought their demise. The council members insulted blacks, and now everyone—whites, Jews, far-left Hispanics, and even conservatives—is rallying to white knight for the blacks. One of the LACC Three has been replaced with a DSA, one’s resigned, and the other’s a dead man walking.

7.8 percent of blacks can still rock a town like they own it. “Influence beyond numbers” brings to mind another vocal minority…one that wields similar power but via dramatically different means. That, and dear old Kanye, will be the topic of Part II.